New stand-up comedy talent Grace Jarvis brings her debut solo show to Fringe at the Edge of the World 2020.

Grace Jarvis is Doing Alright. Now. However, in the last year she’s been peer pressured into a haircut, sprained her ankle trying to avoid a meet-cute and her attempts to attract a Snow-White posse of native birds by filling her pockets with seed remain unsuccessful. She also chose to drive all the way from Brisbane to Melbourne (where she now lives) and hit a fence post trying to avoid a lizard.

Excitable and happy to be here, Grace has a subversive style of unexpectedly dirty stand up. It’s peppered with stories from her eccentric childhood and New Zealand military family that delight and appal audiences and have them wondering ‘did that really happen?’ between bouts of laughter. It absolutely did happen.

If you want to keep tabs on the next generation of young Australian comedians, you can see Grace performing two shows only at Grinners Dive Bar, Hobart on the 10 January 6pm and 12 January 9pm.

Grace is super excited to bring this show to Fringe at the Edge of the World 2020 in what will be her maiden voyage to Tasmania. In only its second year, FATEOTW is the newest face on the Australian fringe festival circuit and will bring artists from across Australia to perform in venues throughout central and north Hobart between 9-12 January.

Grace Jarvis is a 21-year-old comedian and writer (Junkee, The Feed SBS) and is a RAW Comedy 2018 State Finalist. She is a recipient of the Queensland Theatre Young Playwright’s Award and the QUT Youth and Children’s Writing Prize. She cut her teeth in the Brisbane comedy scene and has supported the likes of Mel Buttle and Damien Power. 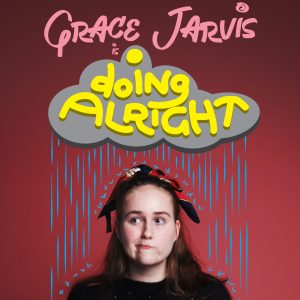 2019 was big for this comedian who has been performing just three short years. At the beginning of the year she was selected to perform at the Brisbane Comedy Festival’s Frocking Hilarious Gala for Actionaid, did a split show at the Adelaide Fringe, sold out her first ever run of Doing Alright at Bris Funny Fest and the year culminated in her being picked to perform in the comedy tent at Woodford Folk Festival over five days.

In 2020 following FATEOTW Grace will also perform at the Melbourne International Comedy Festival for the first time.

“Grace Jarvis says what no one is thinking and it’s hilarious.” – Demi Lardner