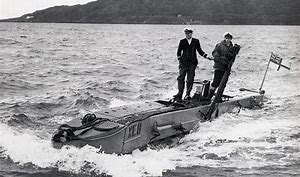 The Commonwealth of Australia had only been in existence for 12 years when it decided to acquire two submarines. These craft were a very new concept. The United States Navy started building them in the late 1890s, and the Royal Navy only started its submarine service in 1901. The Australian submarine AE1 was lost on 14 September 1914 near Rabaul. Its 35 crew were Australia’s first casualties in the Great War. Australia’s other submarines, AE2, was the first Allied vessel to penetrate the Dardanelles in April 1915, effectively starting the first-ever submarine campaign.

Very few Australians know that Brisbane and Fremantle were major submarine bases in the Second World War. At its peak, Fremantle was home to 167 United States, British and Netherlands submarines. The effectiveness, and strategic influence of those submarines in the defence of Australia has been seldom discussed, or perhaps taken for granted. Of the 112 men who were crew on British Midget submarines (X Craft), 10 were Australians, one of whom, Tasmanian Ken Hudspeth, a Tasmanian, played a major role in surveying the Normandy Beaches and marking the way for the landing craft in the D Day landings in June 1944.

Peter Horobin is a submariner, who later worked as a consultant to the Australian and Malaysian governments and held senior positions in industry in Australia and the UK. In recent times, he has been director with an international submarine rescue organisation supporting three NATO countries, Australia and Singapore, and more recently the regional (Asia Pacific) lead for the same group. He played a significant role in the National Submarine History Task Force that provided HMAS Ovens to the Western Australian Maritime Museum, and he was the founding president of the Submarine Institute of Australia Inc. He is the leader of a project to establish an Australian National Submarine Museum.