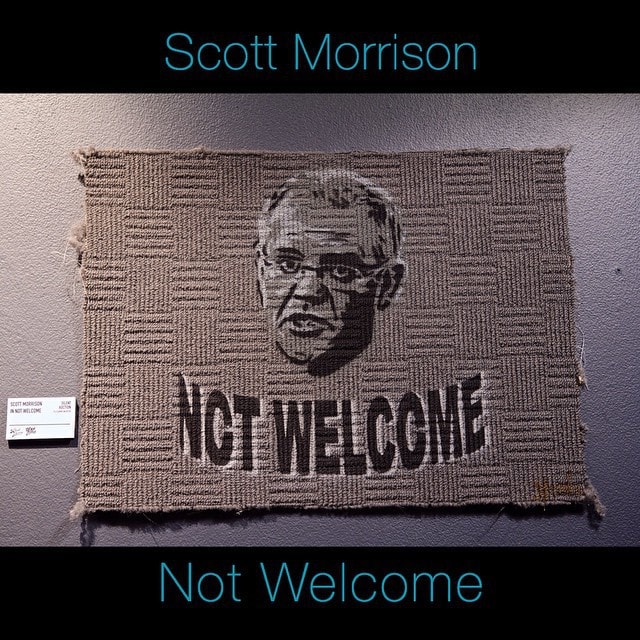 ‘All governments refresh’, Scott Morrison said a few weeks ago when three senior government ministers decided to abandon the shipwreck.  Since then the beached hulk has fallen apart more rapidly than ever, although it has remained sludged in the same spot after running aground with the first Abbott-Hockey deception budget six years ago.

It’s not much use Scott Morrison looking for a reincarnation of James Cook or Matthew Flinders to patch up the decayed hull.  He’s tried that already but doesn’t know which one circumnavigated Australia, let alone which one named the place.

Morrison’s ignorance of history is not a good starting point to ‘refresh’.  As Jared Diamond explained in his book Collapse: Why Societies Choose to Fail or Survive, ignorance merely leads to repetition of failing policies and desperate measures at higher levels of intensity.  Morrison could google Easter Island, Louis XVI and Marie Antoinette circa 1789, Montezuma in 1520, Charles 1 of England in the 1640s and Tsar Nicholas of Russia in 1917, to get the general picture.

You can’t ‘refresh’ a lump of coal.  You can’t ‘refresh’ by building bigger pyramids, walls and monuments to James Cook, by increasing human sacrifice, by generating fear and loathing of others and stoking the fires of xenophobia and nationalism.

You can’t ‘refresh’ by condemning every Galileo to hell, by subverting science as a conspiracy against the greater glories of Australian desertification.  You can’t ‘refresh’ by treating principles, ethics and morality as shifting ‘non-core’ values, as footprints in the sand, to be daily washed or blown away, then reshaped depending on the market conditions.

Morrison, Abbott, Abetz, Frydenberg, Cormann, Dutton and the rest of the dead-eyed crew aboard the decomposed shell of rust called ‘Howards Way’, locked in the slack murk beside Turnbull’s round rowboat going nowhere, have decided – like Montezuma et al – to wreck the joint as much as possible.

As the MHR for the seat of Cook, Morrison wants a $50 million replica of Cook’s Endeavour to circumnavigate Australia – which Cook never did in his own Endeavour – as a tangible testimony and symbolic representation of his basic philosophy in using public funds.

After all, $50 million is peanuts compared to the $423 million contract given to the Kangaroo Island beach shack outfit Paladin to run security at Manus Island concentration camp.  Precedents for giving away $400 million plus donations without a competitive tender process or any transparency about how the funds are spent, are well established, of course.  This one looks much like Turnbull’s $443 gift to the Barrier Reef Foundation in 2018, which had a staff of six at the time.

All this has been put in the shade by the $1 billion three year contract hand-balled by Mathias Cormann’s Department of Finance to the company of Liberal Party treasurer Andrew Burnes, a mate of both Cormann and Australia’s man in Washington, Joe Hockey.  At the time of writing, questions about Helloworld’s connections with Cormann and Hockey and the government contract are ongoing, as are questions about a plethora of other muddy matters, involving ministers refusing to cooperate with police, the destruction of evidence pertinent to the AWU raids, the odd behaviour and connections of another minister in his capacity as chairman of a Senate committee ostensibly looking at the issue of franking credits.

As each of these scandals morph into a new one, it becomes more difficult to get a handle on any of them.  Earlier this month, when the Hayne recommendations were made public, Morrison told us all that his government’s actions ‘have already gone beyond what the royal commission has actually recommended, because we’ve been taking action on this for years’.  That disgraceful display of dishonesty – Morrison voted against a commission 23 times across 2016 and 2017 – doesn’t raise an eyebrow and just gets lost in the filthy and polluted traffic.

‘The politics of this, who cares?’, is now Morrison’s refreshing response about the rot.

Morrison cannot be dismissed as just ‘an accidental Prime Minister’, a flash in the pan, a fan and imitator of Trump who Australians will reject at the polls.  He cannot be dismissed as a crass marketing opportunist who will use any scare tactic or any form of dissembling and misrepresentation to hold onto office.  We need to ask another question.  What do we know of Morrison’s motivations and how that could impact on Australia’s future?

Historian James Boyce has asked the question in an interesting and highly pertinent way in the February edition of The Monthly, suggesting that we need to know how Pentecostalism informs Morrison’s political decisions and world view.

Boyce is not the first to ask this question, but he does so by putting the spotlight on Morrison’s ‘unflinching self-belief and sense of righteousness’ seen through the prism of Pentecostalism as ‘the perfect faith for a conviction politician without convictions’.

Things take on a different perspective if Morrison’s religious convictions conform with apocalyptic Pentecostal teaching that the end of the known world is at hand, determined by the will of God.  Does Morrison’s ‘lump of coal’ and his bemused indifference to climate change and its impacts on the Great Barrier Reef, the Murray-Darling river system and wilderness areas in south-west Tasmania, for example, reflect a personal religious view that these events are the will of God?

Does Morrison believe that every reversal or contradiction he makes, every endorsement of ineptitude, ignorance and corruption by Liberal MPs, every partisan misuse of parliamentary conventions and processes and public funds, and every cruelty he masks as pragmatism, are part of a divine plan explained by his personal relationship with God?

There is a difficulty, nonetheless, for many of us to take this sort of stuff seriously.  We’ve never had a Prime Minister who was a fervent member of an offshoot of American evangelism, whose religious beliefs seem more attuned to a pre-Enlightenment era than anyone who has held the office since 1901.

Morrison’s obtuse and absurd misrepresentation of the Phelps Medivac bill – ‘You don’t need this bill to make sure Australia has control of its borders.  We already do’ – and then his decision to reopen Christmas Island to pervert the intention of the legislation, along with Nauru’s clear intention to stop it is its tracks, suggests that challenging Morrison on any grounds of humanity on this issue, or indeed on climate change and the use of fossil fuels, is a bit like challenging Charles 1 of England and Louis XVI of France to abandon their belief in their divine right to rule.

On these terms, challenging Morrison on the basis of Australia’s commitments to human rights under UN conventions or international law, let alone within Australia by doctors, human rights activists, scientists and advocates for justice on any basis at all, including provision of essential health services, is a waste of time.

Likewise, the Morrison government is most unlikely to see issues relating to misuse of office, misuse of public funds, or anything else falling outside the bounds of generally accepted standards of ethical and moral decision-making, as matters of importance.

It is not just that they have no answers to the problems facing Australia.  They are simply not interested and therefore without competence.  It is not possible for the Morrison mindset to ‘refresh’, just as it is not possible to replicate something that never happened, such as Cook’s circumnavigation of Australia.