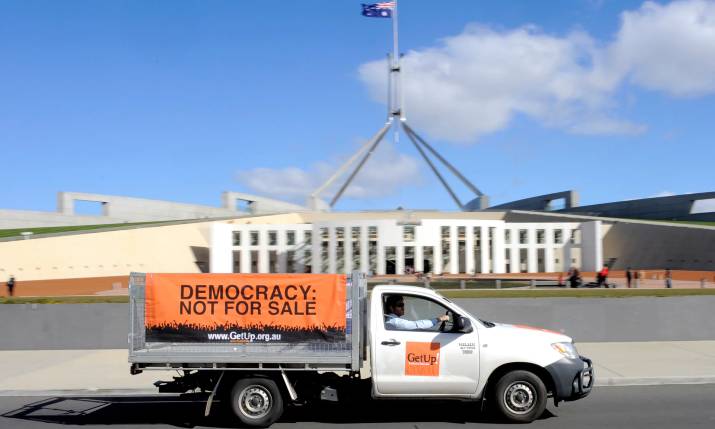 It’s a landmark decision! Last night I received a letter from the Australian Electoral Commission (AEC) and I wanted you to be the first to hear the amazing result.

In the greatest threat our movement ever faced, Liberal Senator Eric Abetz and the hard right pushed a gruelling 20-month government investigation into our independence. Now the AEC has once again confirmed GetUp’s independence!

First I wanted to say how proud I am of us as a movement. We stood together, fighting fiercely to create a better Australia and today we’ve beaten back the hard right’s attack and had our independence, once again, reaffirmed.

It couldn’t have been achieved without tens of thousands of GetUp members holding strong, speaking out and chipping in to save GetUp as we know it.

Now after 3 investigations, review by 3 independent agencies and 13 years of pressure I’ll be personally delivering the AEC’s decision to Eric Abetz’s office tomorrow, to demand an end to the attacks and smears.

The actions of so many GetUp members led to this moment: More than 10,000 members funded the legal fight, spontaneously called into talkback radio or wrote letters to the editor, and chipped in to put our ‘Statement of Independence’ in full-page newspaper ads. This is your victory!

If you haven’t read our Statement of Independence yet, click here to see it.

The AEC’s decision sets an important legal precedent for what independent campaigning looks like in Australia. It looks like all of us, working together to fight for the world we want to see.

Most importantly, we won’t alter anything about how we campaign or let the hard right intimidate us into silence or inaction – especially in the upcoming election. As our Statement of Independence states:

Together, we practice our independence through passionate political engagement. We judge parties and politicians by their policies, values and character — not their brand — then act accordingly…

…Elections are great change moments. Our movement engages fiercely whenever we have the opportunity and means to build a more fair, flourishing and just Australia for all.

Thank you for making GetUp strong and fiercely independent,
Paul for the GetUp team

PS – This outcome would simply not have been possible without members of our GetUp Crew, like you, who make a regular donation to fund our work. Because of you, we could respond urgently to this legal attack and had the support to keep going for 20 long months, without missing a beat on our critical campaign work. As we head into a nation-changing election campaign, your ongoing contributions are critical to supporting our independent campaigning. Thank you!

PPS – In the history of our movement, we will always remember the outpouring of member action when the hard right challenged our independence. See below for just some of the spontaneous responses that flooded into major newspapers.