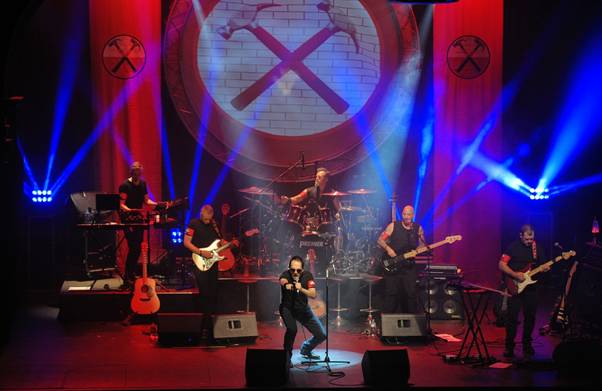 Adelaide performer Matt Goodluck, appropriately named, has the good luck to be performing for the first time in front of his family and friends based in Launceston.

Matt will be singing lead vocals in tribute band ‘Echoes of Pink Floyd’, this year doing a concept show to celebrate the 40th anniversary of legendary Pink Floyd album ‘The Wall’. I had the opportunity to speak with Matt last week about the extensive tour includes both Launceston and Hobart.

Firstly, the name Pink Floyd was said to have been chosen by guitarist Syd Barrett, a combination of the names of Pink Anderson and Floyd Council, both soul musicians.

The Wall, was born on November 30 1979, the eleventh studio album of the band, and one of the bestselling albums of all time, spending 15 weeks on the US Billboard charts.  Strangely enough it was the only single of the band that made number one but not so strange when you realise Pink Floyd were not a singles band. The album itself was a double one and not afraid of the risk in giving fans so much material to digest at once.

‘The Wall’ was an album with themes of isolation and pain and the trauma and madness it led to in the life of one individual.

Just as ‘The Wall’ engaged children from a London sc.hool choir. So, in this tour ‘Echoes of Pink Floyd’ will enlist the help of local choirs. In Tasmania this will be Tapestry Dance Studio Choir in Launceston and Encore Dance and Theatre School Choir in Hobart.

Matt says as the album is a concept one there is an opportunity to wear some ‘concept clothing’ but other than that for this tribute band it’s all about a faithful recapturing of the music than any visual similarities to emulate. True to the importance to create an accurate rendering of the music Matt tells me he got the gig because his voice was a perfect mix of the two main Pink Floyd vocalists.

You can see ‘Echos of Pink Floyd perform at …