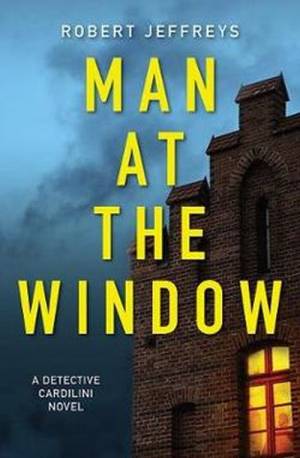 I recently spoke to Robert Jeffreys, author of ‘the man at the window’. Robert tells me that he hasn’t been to Tasmania although he wouldn’t mind a holiday in Tasmania, he and his wife have discussed it but as most of her family are in the in the Eastern states, that is where they tend to holiday..

In this noir novel Cardilini is a policeman who has lost his wife and developed friction with his son over his drinking and work problems.
A scene with Cardilini and his son Paul gardening together, is a metaphor for the rebuilding and blossoming of their relationship again. Robert didn’t consciously write this as a metaphor but can see how this might be interpreted.

Cardilini’s case is to investigate the apparently accidental shooting of a teacher at St Nicholas, a prestigious boy’s school. While Cardilini is suspicious that the shooting wasn’t an accident, he also sees a school desperate to cover up any misconduct and so preserve its prestigious reputation. While Cardilini is eager to discover the truth he is pressured to not ruffle the old boy’s network which extends to the force itself. If he does pursue his suspicions the job offer for his son to join the academy will be withdrawn. Thus a detective dilemna arises.

Robert’s next novel in the Cardilini series set soon after ‘Man at the Window’ will be set in the country town of Broome and will feature the first female detective (a gutsy woman) in WA. There were gaps in gender equality at that time as Robert discovered in his research that women employed in some banks had to relinquish their job upon marriage.

Robert is also concerned with social issues like domestic violence and how they were not addressed in the 1960’s period of his books.

Man at the window by Robert Jeffreys is out now published by Allen and Unwin.