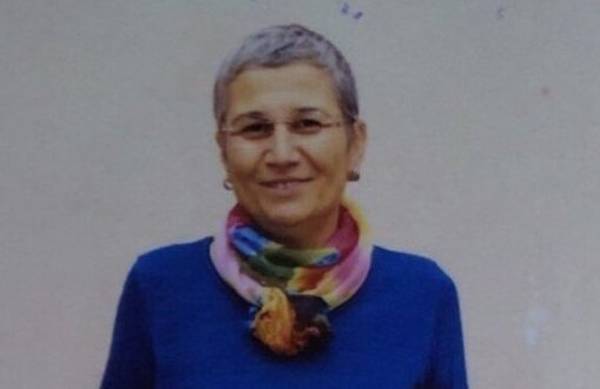 It would be good if you could publicise the plight of Leyla Guven, the People’s Democratic Party MP in Turkey, who is in imminent danger of dying on hunger strike. Leyla is one of 156 Kurdish hunger strikers.

The following motion has been tabled in the UK parliament: “That this House is concerned that the hunger strike in Turkey by Leyla Güven MP of the People’s Democratic Party (HDP) has reached its third month and that she is in a critical condition; notes that her protest has inspired others to hunger strike, including Ilhan Sis in Newport, South Wales, UK who is now on an indefinite hunger strike, and that 156 other Kurds held in Turkish prisons are now also on indefinite hunger strikes; is further concerned for the welfare of those hunger strikers following reports that they have not been given sufficient water or vitamin supplements; expresses regret that the central demand for the end of the cruel isolation imposed on Abdullah Öcalan, the Kurdish leader, and the persecution of the Kurdish people in Turkey has gone unheard; and believes that urgent dialogue on this issue is necessary for these hunger strikes to end and for a tragedy to be avoided”.

The resolution was moved by Chris Stephens of the Scottish Nationalist Party, supported by Jim Shannon of the Democratic Unionist Party, Stewart McDonald, SNP, Liz Saville Roberts, Plaid Cymru (Welsh Nationalists), and Jim Cunningham and Chris Willamson, Labour. Caroline Lucas of the Greens has also signed along with at least one Conservative MP.

College of Arts and Education

Leyla Güven, an MP for the Peoples’ Democratic Party (HDP) and Co-Chair of the Democratic Society Congress (DTK), has been on a hunger strike for 75 days with the aim of the isolation on Kurdistan Workers’ Party (PKK) leader Abdullah Öcalan to be lifted.

A petition has been launched on change.org in support of Güven. More than 3,800 people have signed the petition in four days. The target is 5 thousand people.

“We call for all women at first and people believing in peace to be in solidarity with us for lifting the isolation conditions and sign this letter,” the petition says.

“300 convicts are also on hunger strike”

The following remarks are made in the petition:

“On 8th November 2018, Leyla Güven started the hunger strike demanding the lifting of the condition of isolation on Kurdish People’s leader Mr Abdullah Ocalan who has been held at Imrali Island Prison for 20 years.

“After Leyla Güven has started the hunger strike, almost 300 political prisoners in different prisons of Turkey have also begun the indefinite and irreversible hunger strike with the same demands and these strikes still continue.

“She demands it because the isolation which has been maintained in violation of national and international law is an attack on the people of Turkey and their desire to live together in peace. It is an obstacle to a democratic solution to the Kurdish Question in Turkey.”

Leyla Güven was detained on January 22 due to her social media posts and statements about Afrin operation, and arrested on January 31.

Diyarbakır Chief Public Prosecutor’s Office has filed lawsuits over 14 statements for the press, funeral and meeting she attended from 2016-2018.

*You can join the petition from this link.