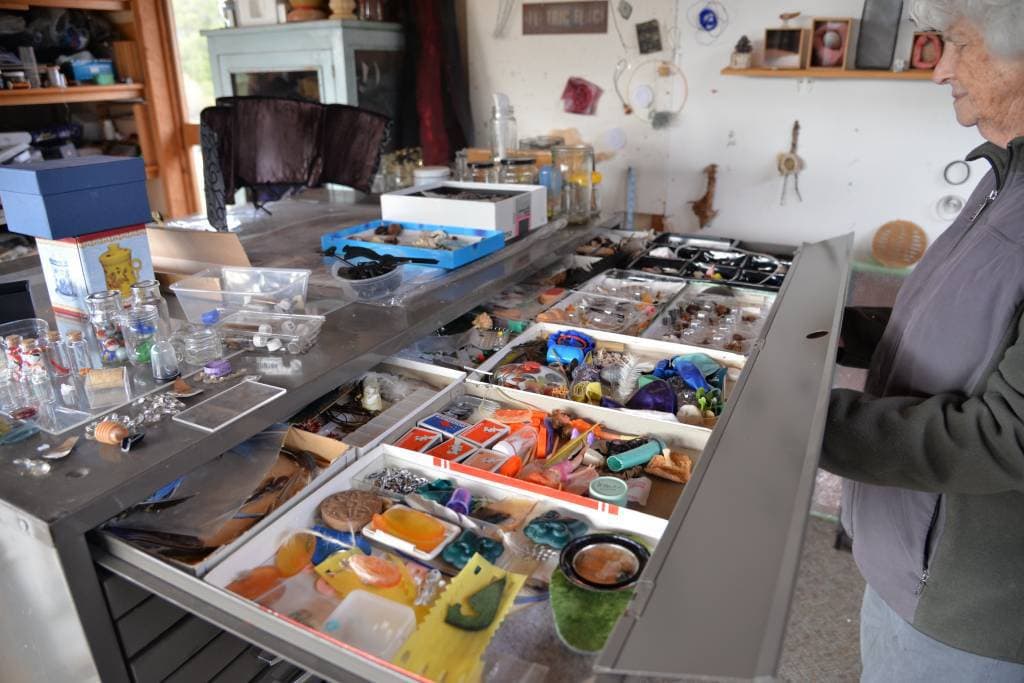 Dr Irene Briant moved to Hobart recently (following the death of her husband Don) from the farm at Penna where she has lived since her marriage. To imagine that moving a lifetime and art career simultaneously, would be stressful, is an understatement, when further magnified by working toward an exhibition surveying your art over four decades.

Irene Briant – A Survey presents over 50 sculptural works from a career that began in the late 70s, and includes drawings and photographs, and new work made specially for this exhibition.

Pat Cleveland, founder of Handmark Gallery, referred to Irene Briant – in conversation with me in 2017 – as “the first Tasmanian artist to do odd, which at the time was very brave”. There is no doubt that her bowerbird approach to materials and their conceptual application has been influential even if she is not as well known now as in the 90s and 00s. During their respective heydays she was a member of both Chameleon in Hobart, and Australian Girls’ Own Gallery (AGOG) in Canberra. Her inclusion in Australian Perspecta 1991 was a nod to her insight and early tangential treatment of post-modern, post-colonial Australia. And she is far from any plans to retire.

There have been few years since 1982 when she hasn’t exhibited in a group or solo show in Hobart or in mainland galleries. There’s been an ongoing comparison to other artists working with found materials, but none of them have the sense of Tasmania that Briant does, or the quiet observation of the natural world that her often quirky and witty pieces convey. She has the distinction of having made arguably the largest artwork that the Tasmanian Museum & Art Gallery owns; Requiem was commissioned in 1999 as part of TMAG’s contemporary art commissions – an elegiac work dedicated to the extinction of the Tasmanian emu. In Requiem, Briant achieves an elegant summation of her consideration and observation of the Tasmanian landscape pre- and post-colonisation, wrapped up in the device of the garden yet spread across the gallery floor as though to seek out and rejoin with the ‘other’, the uncontained.

The exhibition was supported through Arts Tasmania by the Minister for the Arts. The Salamanca Arts Centre has supported the exhibition through provision of the venue, marketing and installation assistance. An accompanying catalogue was funded through a grant from the Gordon Darling Foundation, and includes essays by Frances Butler and Sylvia Kleinert.

Irene Briant – A Survey will be opened at the Long Gallery, Salamanca Arts Centre on Friday 11 January 6pm by Ingo Kleinert.