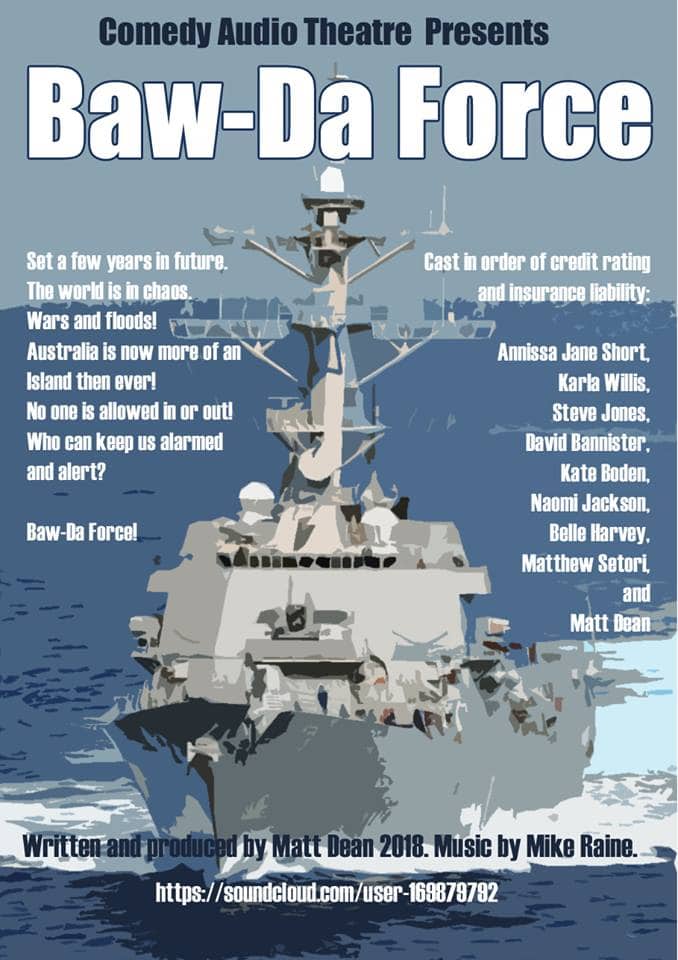 A Hobart based project that broadcasts locally written comedy serials to the world, via sound cloud. Since June 2018 CAT has produced and released three serials and a collection of comedy sketches.

Writer and director Matt Dean set the project up because of the current lack of opportunities for Australian serial and sketch comedy (especially in Tasmania), and because it can also be fun to do so.

The first serial  ‘Detective from the past’, is about a detective from the 40’s finding herself in 2020’s Hobart, solving crimes that no one else wants to. 12 episodes have been produced so far.

The second series Space Force Patrol is set 200 years in the future about an Earth based patrol causing problems in a peaceful galaxy. Four episodes have been produced with at least another four are to be recorded in 2019.

The third project is a series of ongoing sketches. The sketches include the Sco-Mo & Lara podcasts, an ‘all female’ take-off of the Footy Show and reality TV show ‘Grand designed divorces.

The comedy scripts are recorded once a month and doesn’t take up too much of the time of very busy people. The project also encourages new writers to have a go at writing comedy sketches.

All these projects are currently online and have so far had over 2,000 public listens, many from overseas. The latest project ‘Baw-Da Force’, set about 10 years in the future, with a world in chaos, where no one can enter or leave Australia. The series is about a patrol boat keeping those borders alarmed. Besides attempts by people to enter Australia, this patrol boat has a 100% drug clean up rate thanks to enthusiastic sniffer dog ‘Charlie Co-co’.

The plan for this project is to present a monthly ‘Goons’  style live show of some of the episodes and sketches. C.A.T. is also currently  looking at funding and sponsorship opportunities.

The live shows will also include real 1940’s radio scripts that are now out of copyright.

Matt Dean is also a song writer and drama teacher and is enjoying the return to radio style comedy. He has been part of productions for Channel 31, PBS FM, Lies Magazine, RTR FM, 100 FM and has written and directed plays in the Melbourne comedy festival and in the Castlemaine State festival.

Some of the best episodes and sketches include.