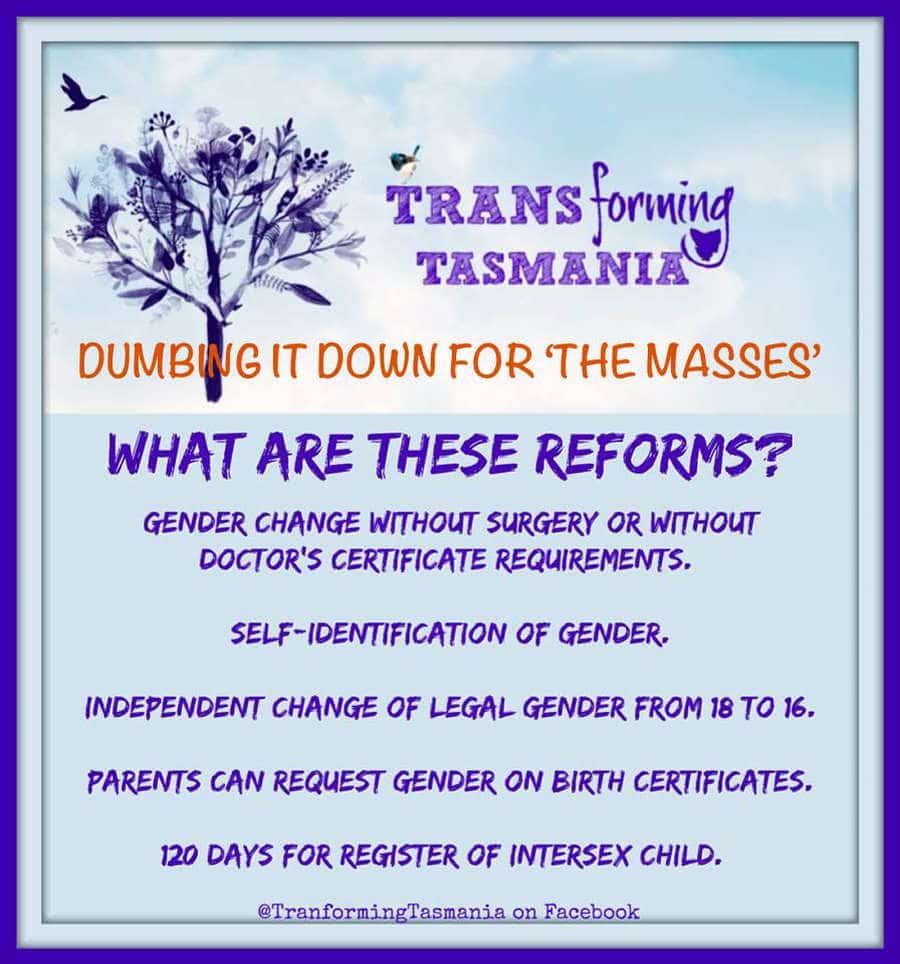 This is ‘fake news’.

The Northern Territory bill – the Births, Deaths and Marriages Registration and Other Legislation Amendment Bill 2018 – is yet to be debated in the NT Assembly.

In fact, the Social Policy Scrutiny Committee inquiry into the bill is not due to produce a report until 27 November.  We’re surprised Mr Croome and Mr Meijers are spreading this sort of misinformation.

Leaving aside the fact the bill hasn’t passed yet, Mr Croome and Transforming Tasmania could learn something from the process undertaken in the Northern Territory, and the content of the amendments proposed.

The amendments were referred to as parliamentary committee for inquiry and public consultation, as they should have been.

The NT amendments will remove the forced divorce imperative for transgender persons who wish to change the sex/gender marker on their birth certificate.  They will also remove the need for gender re-assignment surgery before those changes can be made, but maintain a requirement for ‘appropriate clinic treatment’ and a ‘statement from a registered medical practitioner or psychologist’ to that effect.

Importantly, the NT amendments retain the overarching principle of family law in Australia.  Any sex/gender change applications by parents on behalf of a child must be shown to be in the ‘best interests of the child’.

Additionally, the Registrar of Births, Deaths and Marriages will have the discretion to limit the number of applications that can be made by an individual, or their parents, to change the sex/gender marker on their birth certificate.  The Tasmanian amendments, as passed by the Lower House, are silent on this issue.

Although the NT amendments are still problematic for women’s rights groups, they don’t attempt to totally rewrite history and the law with no oversight or clear social licence.

The Tasmanian Labor and Greens parties, and speaker Sue Hickey, have been persuaded – by Transforming Tasmania – to take a wrecking ball to birth registration laws.  The legislative changes they supported could introduce untested concepts, like ‘gender expression’ into anti-discrimination law.  They talk about the ‘apparent sex’ of a newborn infant ‘as assessed by the parents’, and the notion of determining a child’s ‘will and preferences’ about gender by ‘speaking to them’.

What happened to commonsense and objectivity?  What about the ‘best interests of the child’?  How can a pre-verbal child articulate their ‘will and preferences’ about gender to anyone, let alone a magistrate?  What happens if parents disagree about the gender to be registered for their child, or about a change to the sex marker on their child’s birth certificate?

There are so many questions, and no answers in the amendments passed by Labor, the Greens and the Government speaker.  The Legislative Council truly has its work cut out, and no-one would logically expect them to sort the mess without expert advice.

Rodney Croome and Transforming Tasmania should be upfront with the Tasmania people.  Stop taking them for fools by spreading false information and dumbing down their agenda with cute posters and grossly oversimplified explanations of the amendments.

We might be just the ‘masses’, according to Labor trans rights champion, Ella Haddad, but we’re not stupid.