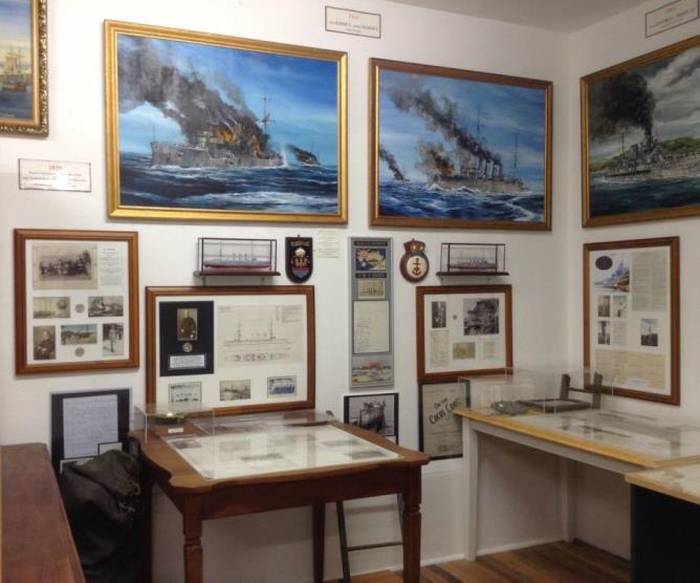 Presented by Jean Rosevear, Volunteer at Mainly Maritime
Brian Morrison began collecting maritime memorabilia from when he was twelve years old, while living at Strahan on the West Coast. He later moved to Mossman in NSW, and then travelled through Asia as part of the merchant navy. He established his collection in 1963, which then formed the basis for the Warships and Maritime Corps Museum. This was based at Franklin in southern Tasmania for many years, but then Brian had to move out. So the search for a new home was on!
He has now leased the former squash courts at St Helens, and opened up to the public in early November. It is already attracting curious locals and tourists, and should become another important attraction on the East Coast.
There are more than 10,000 catalogued items in the Museum’s collection, covering naval, maritime and space history, including naval documents and publications that are over 600 years old. It includes original paintings, charts, letters, uniforms, models, autographs, photographs, artefacts and more. The collection of original documents bearing the signatures of significant figures from history is a must-see part of the museum. Brian also has an extensive research collection with much historical information of interest to researchers. The gallery is now housed in eight rooms, with areas for future expansion.
Jean Rosevear is a retired primary school teacher, who is a very good friend and supporter of Brian Morrison. Brian has asked Jean to present the talk, and she is proud to highlight this incredible collection.
Time: 12.00-1.00pm, Tuesday 4 December 2018 Place: Royal Society Room, Tasmanian Museum and Art Gallery, Customs House, 19 Davey St entrance.
Phone the Maritime Museum on 6234 1427 for more details or email john.wadsley@maritimetas.org