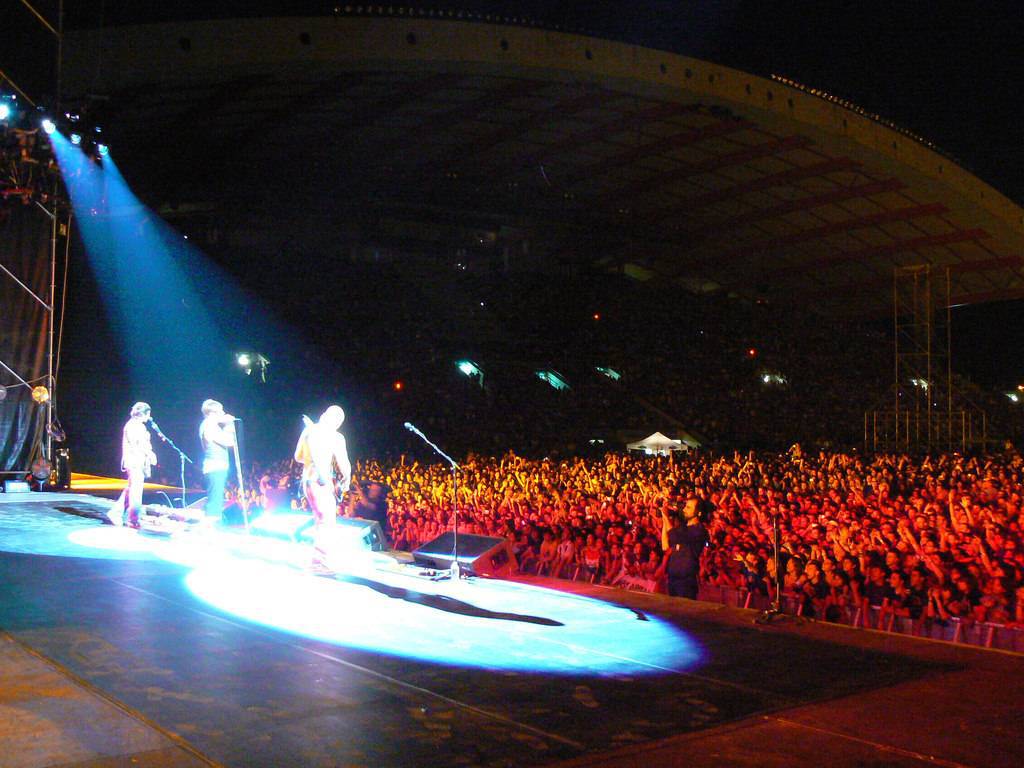 Australia 2019
MELBOURNE, AU (November 16, 2018) – Live Nation is thrilled to announce that RED HOT CHILI
PEPPERS will make a long-overdue and highly-anticipated return Down Under in 2019.

After sold-out US and European tours during 2017 and 2018 the Peppers most recently undertook three
massive headline shows at Lollapalooza South America.

The Peppers are one of the most successful acts in rock history, often performing in front of stadium
and festival audiences in excess of 100,000. The Australian tour will start with a rare intimate show at
Hobart’s Derwent Entertainment Centre – the first time the LA-based band will have travelled to
Tasmania.

Following their one-off Tassie show, Red Hot Chili Peppers will play arenas in Sydney, Brisbane and
Melbourne; open air shows at Hope Estate in the Hunter Valley and at A Day on The Green at Mt
Duneed Estate, Geelong, before their final Australian show at Perth’s NIB Stadium.

The Peppers will also headline the 2019 Superloop Adelaide 500 post-race concert on March 3.

The band is expected to play a set comprising of a selection of tracks such as ‘Dark Necessities’ lifted
from their current and eleventh studio album, The Getaway (which spent two weeks at #1 on the ARIA
Chart), plus greatest hits and classic album tracks such as: ‘By the Way’, ‘Can’t Stop’, ‘Snow (Hey Oh)’,
‘Otherside’, ‘Californication’, ‘Under The Bridge’ and ‘Give It Away’.

“We can’t wait to see all our fans in Australia and New Zealand – it has been too long.
The fact that we get to play in Tassie for the first time makes this tour even more
special”.

Tickets for all shows will go on general sale at midday (local time) on Monday, November 26.
Red Hot Chili Peppers Fan Club members may secure tickets during the exclusive pre-sale starting at
9am Wednesday, November 21.

For complete tour, ticketing and VIP Experience details, visit: livenation.com.au.
Five years after the release of I’m With You which hit #1 in 18 countries, The Getaway (through Warner
Music Australia) is the band’s sixth ARIA #1 album.

It follows in the footsteps of earlier #1s: Stadium Arcadium (2006), By The Way (2002),
Californication (1999), One Hot Minute (1995) and one of the biggest albums of the ’90s – Blood Sugar
Sex Magik (1992) – which Rolling Stone rated in the top 20 of the “100 Best Albums of the ’90s”.
Red Hot Chili Peppers – singer Anthony Kiedis, Melbourne-born bassist Flea, drummer Chad Smith,
and guitarist Josh Klinghoffer – have sold more than 60 million albums, including five multi-platinum LPs,
and won six Grammy Awards.

The band was inducted into the Rock and Roll Hall of Fame in April 2012.

Red Hot Chili Peppers last played a headline tour of Australia in April 2007, performing nine sold-out
shows to a total attendance in excess of 140,000. The band last returned to Australia to headline at Big
Day Out 2013.

Fans would be wise to secure their tickets early – this tour will be red hot: