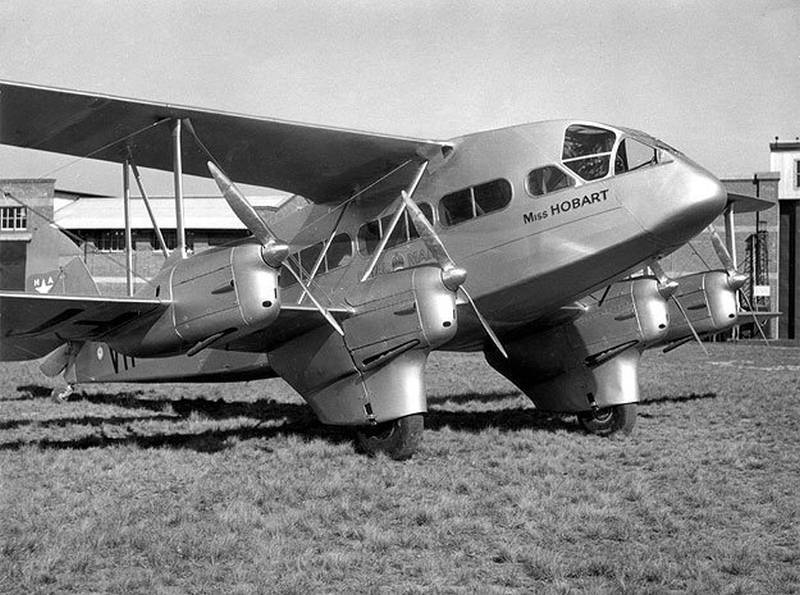 On Friday, October 19, 1934, the alarm went out … the airliner Miss Hobart had gone missing between Launceston and Melbourne.

Miss Hobart was a four engine, 12 passengers De Havilland 86 which left Western Junction airport at 9am. Ten Tasmanians were aboard; seven men, including the Rev. H.E. Warren of  St Mary’s township on the east coast, and two women, one with a small child. Rev Hubert Warren was on his way to take over St Thomas’ Church, Enfield, Sydney.  His wife and children, deciding not to accompany him, had planned to travel to Sydney by steamer.

One of the women was Miss K Mercer, a well-known competitive horse rider from Campbell Town in the Midlands. One of the men was Garnet Rupert Gourlay who had served with the 1st Battalion Commonwealth Horse during The Anglo-Boer War and later with the 40th Battalion in WWI.

Mr Gilbert Jenkins and Captain V C Holyman, traffic manager of Holyman’s Airways, piloted the airliner. Gilbert Jenkins was ex-Royal Australian Air Force and ex-Canadian Air Force, with which he had commanded a squadron.  After leaving the services, Mr Jenkins had further comprehensive flying experience, commuting between the mainland and Tasmania many times.  It was only in July of that same year that he had accepted the post with Holyman’s Airways Pty Ltd.

The plane was last heard from at 10.20 a.m. when approaching the Victorian

Coast.  A message was received at Laverton stating:  “Over Rodondo Is. . .  all’s well.”

There were indications that it passed over Wilson’s Promontory, but what happened next remains a mystery and no final conclusion was ever reached by the subsequent inquiry.

As soon as it was apparent Miss Hobart was overdue, the alarm bells were rung.  Holyman’s Airways Pty Ltd immediately contacted the Civil Aviation Department and a Desoulter monoplane began searching the area. Visibility was good that late afternoon and as time progressed with no result, other planes joined the search.

At dawn on Sunday October 21, the Royal Australian Air Force sent out a supermarine flying boat.

The route from Tasmania to Essendon in 1934 was northeast from Western Junction over Flinders Island, following a line from the small islands in Bass Strait north of Flinders to Janakie Aerodrome where emergency supplies of petrol were kept and on to Essendon.

Miss Hobart was under contract to the Commonwealth and had only begun its Melbourne, Launceston and Hobart service on October 1. In the test flights the plane had showed no problems. It flew three times a week, usually by way of King Island from Melbourne to Tasmania, and by the way of Flinders Island on the return journey. Besides the 10 passengers, it carried airmail. All the occupants of Miss Hobart were enclosed in one large cabin.

A possible cause of trouble given at this stage was that the plane might have run out of petrol, perhaps because of a leakage, but it was far too soon to be certain.

Over the weekend the search was intensified, but only one clue of importance had been found – a large patch of oil located by the Southampton Flying boat near Citadel Island, about 10 miles west of Wilson’s Promontory.

There was further hope. A collier steaming in the vicinity witnessed two flares at Liptrap but although they steamed close to the beach they saw nothing.  Later it would be revealed Miss Hobart did not carry flares.

Six planes had now joined the search including Miss Launceston, sister plane to Miss Hobart, but besides the oil slick, there was little other evidence. The search was joined by a number of ships, including Coastal steamers, but no wreckage or any other clue was discovered.

The search area was broadened and samples of the oil slick were taken for analysis to determine whether the film was caused by oil similar to that used in the engine of Miss Hobart.

By Monday, October 23, it was becoming increasingly apparent that to continue the search was fruitless. The Civil Aviation Department decided to abandon it.  The belief was that the craft had fallen into Bass Strait and there was no hope for its passengers. Then, when proceeding out of Laverton over Rodondo Island, floating objects were observed.  The craft swooped down in an attempt to identify them, but later the pilot, Lieutenant Frewin, reported that it was not possible to say whether the floating object was part of Miss Hobart’s wing. After that, all hope of rescuing the passengers was totally abandoned.

Some believed at the time the pilot of Miss Hobart was forced to attempt a pancake landing on the ocean surface.  In such a case the Miss Hobart would have in all probability dived straight for the seabed and there would be no wreckage on the surface.

The Duke of Gloucester, visiting Australia at that time, sent the following message to the Governor of Tasmania:  “I am profoundly distressed at the loss of the airliner, Miss Hobart.  Please convey my deepest sympathy to the relatives and dependents of those who lost their lives.” He also received telegrams from the Governor-General, Sir Isaac Isaacs and the Governor of Victoria, Lord Huntingfield.

By the following Friday, October 26, the disaster was slipping from the headlines.  Although ships had passed through the area where the craft was believed to have downed, there were no further reports of wreckage. The belief that it crashed into Bass Strait off the coast of Victoria was accepted.

An official inquiry was opened in Launceston on Tuesday October 30, 1934, sparking great public interest. The inquiry went into great detail about the prevailing weather at the time and the plane’s range, but there was no clear reason for the mishap.  Very strong head winds were ascertained as a cause of the accident.

In tribute to Miss Mercer, the Woman Show Judges Association stated: “While our sympathy goes out to the relatives other thoughts will air by her dumb friends who will miss her loving touch and her understanding.”  One suspects by her “dumb friends” it is meant, horses.