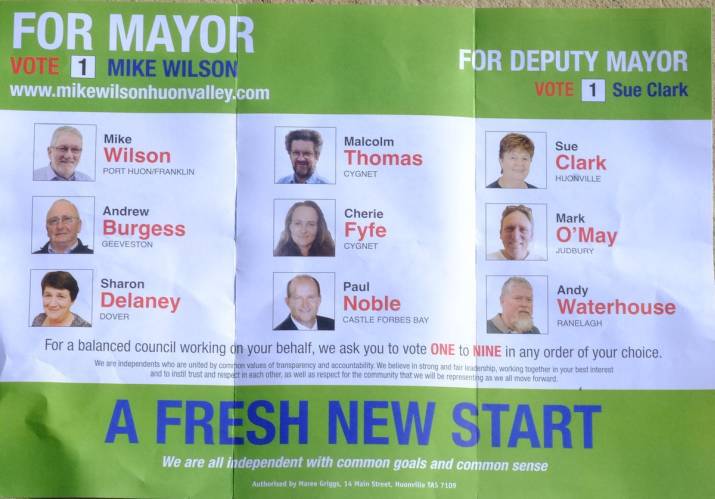 I’ve attached some advertising for the Huon Valley Council elections. I already wasn’t sure how it was allowed that councillors on a failed Council were allowed to run again and then I get this leaflet in my mailbox.

Firstly, it’s initial impression was of an official leaflet laying down all the candidates, which of course it isn’t and doesn’t. In that sense, it felt deceptive.

Secondly, Mike Wilson’s involvement. He’s obviously a seasoned campaigner, having more exposure than others on the road, and in local shops ( the ‘One Tough Bastard’ book on sale at Geeveston IGA for example), than others. I don’t think he should be allowed to run for his prior involvement.

Thirdly, the inside of the leaflet, to my interpretation, spells out in plain language how the 9 listed intend to vote together on many issues, ‘we are independents united by common values..’ etc etc. Does this not lean towards history repeating itself and as has been said before, ending with costing roughly $500,000 to deconstruct Council.

I thought it was important that this leaflet was put out to a wider audience, for, at a minimum, those listed to say how they would use their powers should they become Councillors and how they intend NOT to repeat history.

I’ve been going through the candidates deciding who to vote for. These 9 have been struck off my list straight away.

I’m not sure as to what’s best to do aside from making my vote count, but feel strongly this is wrong.