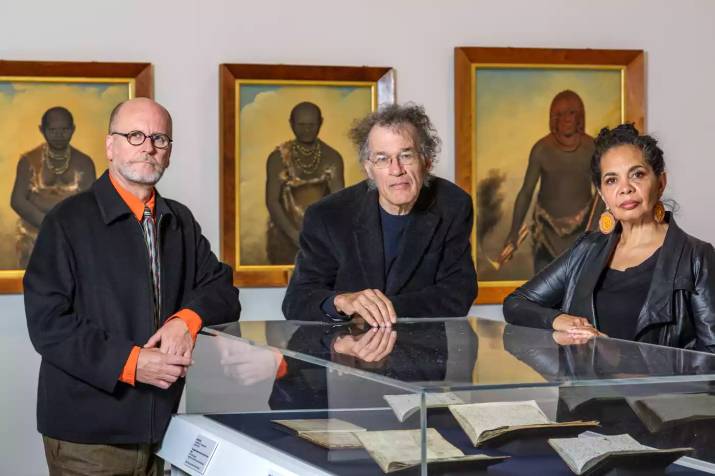 Symbolically named for a Duterrau painting that has long been missing, exhibition in Canberra interrogates the stories we haven’t told

Interrogating Australia’s missing history – all of those events around the colonial frontier that so many of us never heard about at school or read of in the history texts that supposedly guided us – is a fraught but critical responsibility of our leading cultural institutions.

The National Gallery of Australia, no stranger to telling the stories of frontier war – most recently in last year’s third annual Indigenous art triennial, Defying Empire – has taken a welcome and courageous step with The National Picture: the art of Tasmania’s Black War.

Curated by Tim Bonyhady and Greg Lehman, it’s an understatement to call this exhibition innovative. The National Picture, which interrogates the at-best patchy visual record of the Black War and genocide of 1820s van Diemen’s Land, is audacious on both an intellectual and curatorial level, and provocative beyond comfort even for those more conversant with the darkest episodes of Australian history.

The National Picture speaks truth to ignorance. But it also bellows it to political power at such a critical national moment, a moment when we have a federal government that is wilfully deaf to the voices of Indigenous Australians demanding honesty about the past.

I’ve never wept in an art exhibition before. But when I stood before four portraits of Indigenous Tasmanians including Trucanini – paintings that were purchased from their creator, free settler Benjamin Duterrau, by a colonial government in 1837 to commemorate the Aboriginal people it had set about exterminating – the emotion was unanticipated and overwhelming …