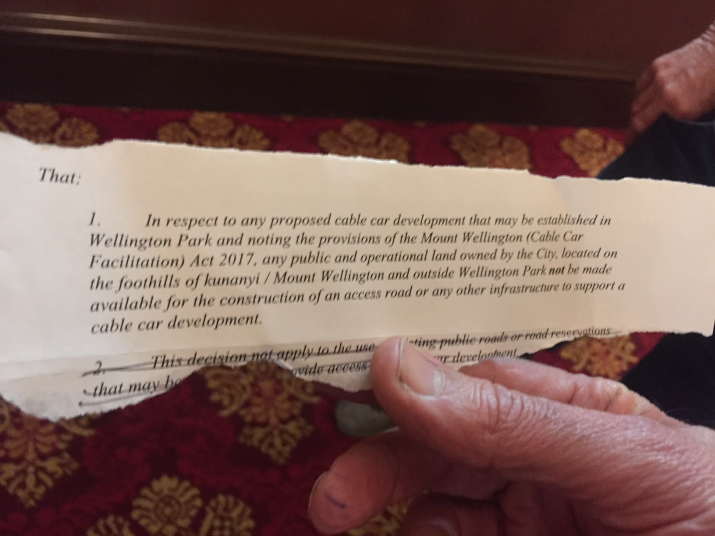 The revised development plans of the Mount Wellington Cableway Company (MWCC) have struck their first council hurdle after a Parks and Recreation Committee recommended to deny the company access to public land.

On Thursday night, the committee of five aldermen unanimously passed a motion to make any public or operational land owned by the city not available “for the construction of an access road or any other infrastructure to support a cable car development”.

The motion will be used as a recommendation to the full council and, provided no-one changes their mind, will have the backing of five out of the council’s 11 aldermen.

Alderman Jeff Briscoe, who tabled the motion, likened the decision to the Carlton United Breweries’ refusal to allow any construction on their land.

At the packed meeting, the MWCC had not applied to construct anything but to conduct a flora and fauna study across a 50-metre-wide corridor of land near McRobies Gully in South Hobart.

The site to be studied was flagged in development plans released on the weekend as the location for a 3-kilometre link road.

Alderman Briscoe said the committee’s task was to consider the request for study but went further to address the plans for a road at the site.

“Why would they do a flora and fauna study if they didn’t want a road? It was really a circular argument,” he said.