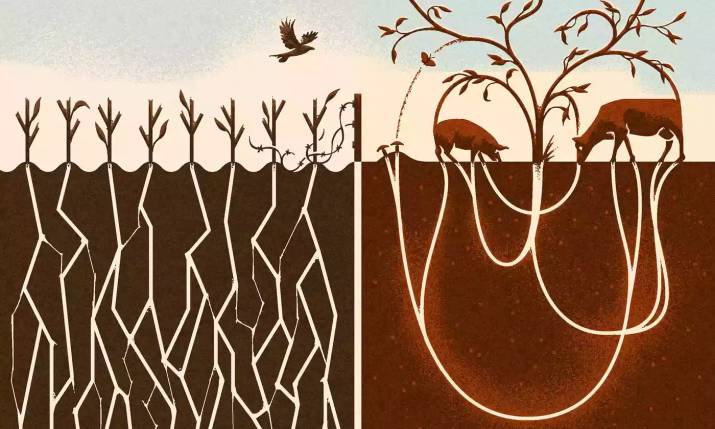 ‘Calls for us all to switch entirely to plant-based foods ignore one of the most powerful tools we have to mitigate against these ills – grazing and browsing animals.’ Illustration: Matt Kenyon

Intensively farmed meat and dairy are a blight, but so are fields of soya and maize. There is another way

Veganism has rocketed in the UK over the past couple of years – from an estimated half a million people in 2016 to more than 3.5 million – 5% of our population – today. Influential documentaries such as Cowspiracy and What the Health have thrown a spotlight on the intensive meat and dairy industry, exposing the impacts on animal and human health and the wider environment.

But calls for us all to switch entirely to plant-based foods ignore one of the most powerful tools we have to mitigate these ills: grazing and browsing animals.

Rather than being seduced by exhortations to eat more products made from industrially grown soya, maize and grains, we should be encouraging sustainable forms of meat and dairy production based on traditional rotational systems, permanent pasture and conservation grazing. We should, at the very least, question the ethics of driving up demand for crops that require high inputs of fertiliser, fungicides, pesticides and herbicides, while demonising sustainable forms of livestock farming that can restore soils and biodiversity, and sequester carbon.

In 2000, my husband and I turned our 1,400-hectare (3,500-acre) farm in West Sussex over to extensive grazing using free-roaming herds of old English longhorn cattle, Tamworth pigs, Exmoor ponies and red and fallow deer as part of a rewilding project. For 17 years we had struggled to make our conventional arable and dairy business profitable, but on heavy Low Weald clay, we could never compete with farms on lighter soils. The decision turned our fortunes around. Now eco-tourism, rental of post-agricultural buildings, and 75 tonnes a year of organic, pasture-fed meat contribute to a profitable business. And since the animals live outside all year round, with plenty to eat, they do not require supplementary feeding and rarely need to see the vet …