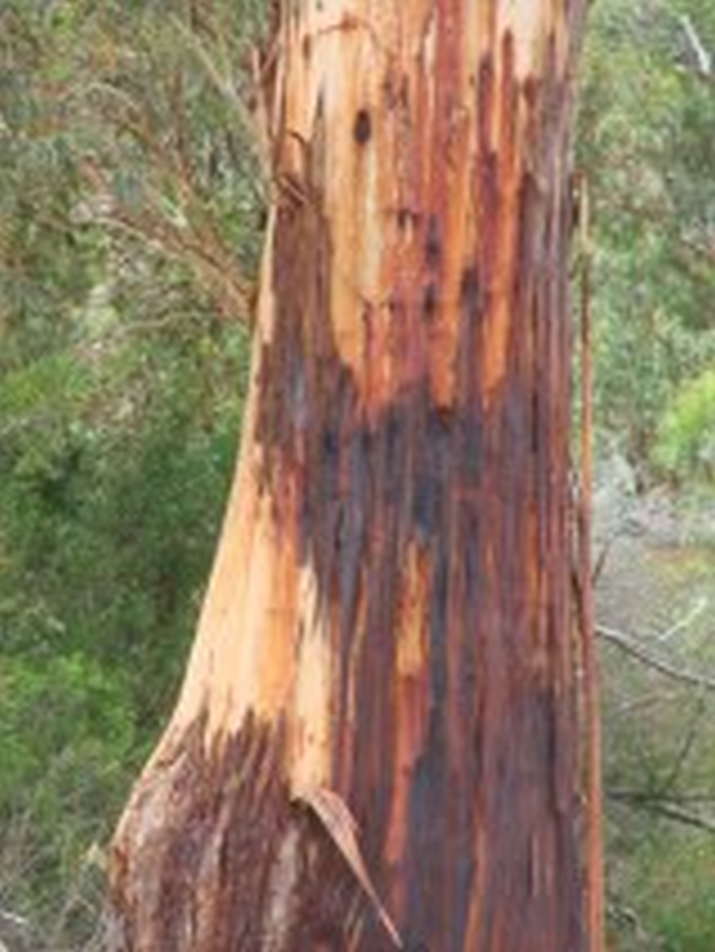 *Pic: A gum tree on the boil (Rose Grant)

I have started to notice on my property here at Bentley in northern Tasmania a large number of dead trees having the sap running out of the trunks like blood from a wound and then turning the bark ginger in colour.

This is the colour of almost certain death … death by Gingivitis. It’s a well-known gum disease in humans and it’s now the name I am giving to the boiling of the gum in certain species of Tasmanian eucalypt.

The cause can be fairly and squarely laid at the door of climate change which caused a long and extremely hot spell of weather here in the summer of 2012/2013.

In trees recently felled a relationship can be established between record hot temperatures and the signs of the oozing sap. This is found by counting the tree rings as the tree has slowly bled to death.

Dr Tim Wardlaw (principal scientist, ecosystems services with Sustainable Timbers Tasmania, and researcher at the Office of the School of Natural Sciences University of Tasmania in the field of forestry pests, health and diseases) has stated that heat-stress is the cause in blue gum (Eucalyptus globulus) plantations.

“The reason we call it ‘ginger tree’ is the staining on the stem caused by gum bleeding out of large pockets of gum just underneath the bark.

“When we looked closely at those pockets, we found they were formed in the growth ring of the 2012 and ’13 growing season.

“That season was really notable because the summer months were much hotter than average, and they ended in a record breaking heat-wave in early March. It was really pronounced in the north of the state.

“Temperatures in Launceston were above 30 degrees for eight consecutive days … and that was double the previous average.

“In weather events like that, the trees respond by losing water really rapidly through their leaves.

“The trees become water stressed, and will shrink in response.

“I think that shrinkage is causing injury to the bit of the stem between the bark and the wood where the new wood cells are formed.

“That injury response is the production of those gum-veins and pockets we see, and red bleeding from the stem.

“In response to that stress the white gums are weakened, and are also attacked by insects and diseases that normally wouldn’t affect healthy trees.

“We’re seeing some trees dying, from wood-boring insects particularly, that have attacked the trees after the stress.”

Dr Wardlaw said the syndrome is not caused by insect attack, and it has nothing to do with fungal infections like myrtle rust or phytophthora root rot.

He said quite large areas of both native forests and blue gum plantations are affected.

The Liberal Party (the principal exponents of “Climate Change is Crap”) might like to consider this matter with some care.

Maybe the Gingivitis is the first real indicator of a serious underlying problem caused by climate change in Tasmania.