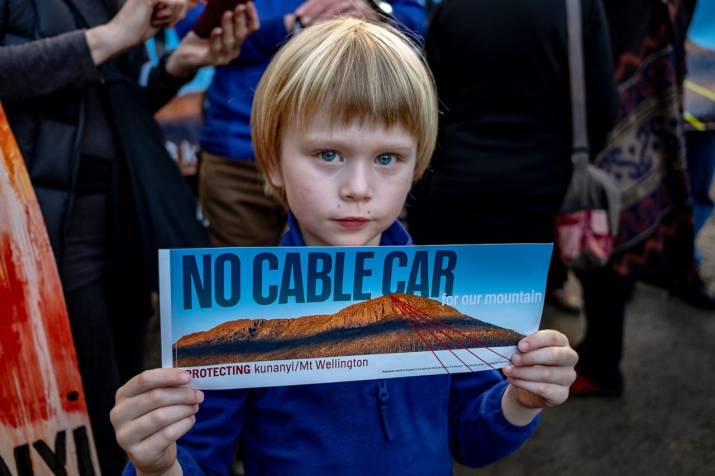 *Pic: ROB WALLS. Richard Flanagan’s memorable speech to an anti-cable car rally in Cascade Park a month ago. The speech was before thousands of people. Read the speech: HERE

Protestors outside the gates of the McRobies Gully Waste Management Centre

Councillor and mayoral candidate Anna Reynolds, tells the crowd that discussions with MWCC (Mount Wellington Cableway Company) will now be on the open agenda, instead of a closed meeting as formerly announced.

At very short notice members of the Hobart community will be outside the entrance to the South Hobart Tip at 4.15pm today (Saturday) to protest the MWCC’s latest plans.

“It doesn’t matter where the cable car starts from the opposition will be the same.

“This is about the impact on our mountain.

Carlton and United Brewers said ‘no’ to the cable car and the people of Hobart said ‘no’ at the massive rally in May”, said Ted Cutlan, spokesperson for ROCC.

“The community have rejected the cable car for many different reasons but chief among them is the dramatic impact of the Visitor Centre proposed for the top of the Organ Pipes.

“The artist impression as seen in today’s Mercury shows a massive commercial building, completely at odds with the concept of a wild, natural environment that we all love.”

“There is still very little detail and we call on the Hobart City Council to make any deliberations on the proposal open to the public.

The secrecy surrounding this project must stop.”

*Ted Cutlan is spokesperson for Residents Opposed to the Cable Car Inc. (ROCC)