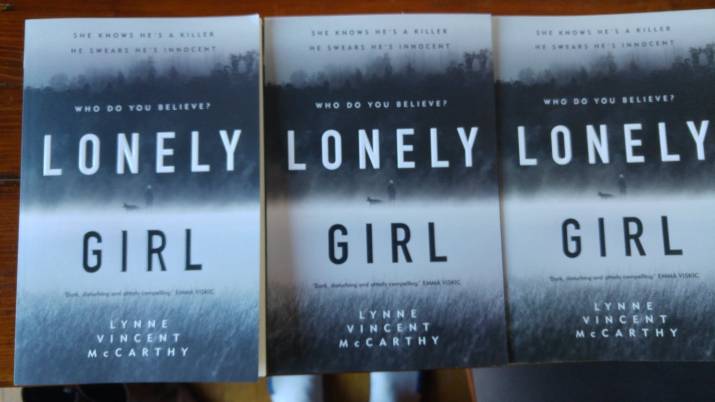 Tasmanian Times has books to give away. Three books by Lynne Vincent McCarthy, “She knows he’s a killer. He swears he’s innocent. Who do you believe? LONELY GIRL.” All you have to do is write to editor@oldtt.pixelkey.biz , giving your snail-mail address. As always, first in best dressed …

‘Lonely Girl’ is set in Tasmania, it’s a startling and often bleak tale. It is the story of Ana, the spelling of her name, missing that extra ‘n’ is perhaps a metaphorical nod to all that is literally missing in Ana’s life. Brought up by a mum and moralistic grandmother that showed her little affection, Ana has had little joy.

Working in a local pharmacy Ana is the object of the pharmacist’s romantic feelings. This affection however is not reciprocated. The pharmacist only attraction for her is the numbing chemicals she might procure to lift her out of her lonely days.

Alone, except for the companionship of her much loved, ailing dog River, who, like his namesake is slowly drifting away from her.

Just when Ana seems to be in complete despair a chance observance of a loved up couple in a car grabs her interest. Later she learns the woman she saw in the car has been murdered and finds herself involved in the aftermath of the crime when by accident she runs over the man who was in the car with the woman and may be responsible for her demise.

With a hint of Stephen King’s ‘Misery’ Ana makes a dangerous decision.