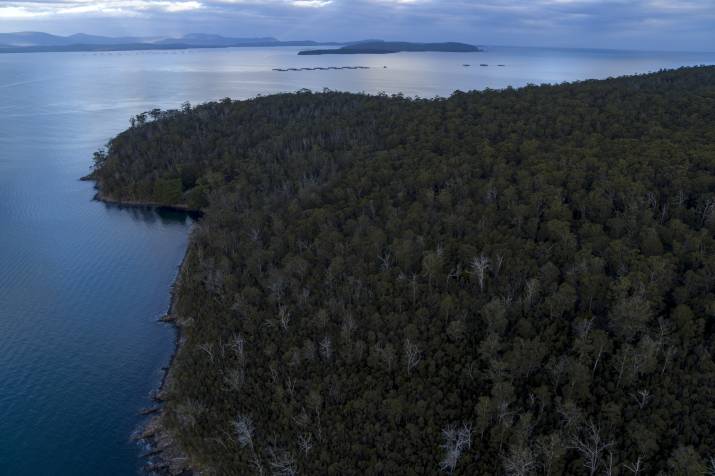 The email correspondence reveals that a new road would need to be constructed to avoid incursions into the World Heritage Area along Peak Rivulet Road. This is the road that leads to one of Far South Tasmania’s iconic walks: Adamson’s Peak Track. We quote part of this email exchange: “we need a new road with a new name, it can be metres from the existing road if need be”.

The documents also reveal that Reliance Forest Fibre (parent company is the Cayman Islands-incorporated Global Forest Partners LP), the company who purchased the 29,000 ha state owned plantation estate from STT in a fire sale last September, is involved in discussions with STT relating to the Southwood Fibre proposal.

The leaked documents show that the government is well and truly involved in this proposal, however, they keep on denying it. Resources Minister Guy Barnett has been quoted in the Mercury saying that the Greens are making “grandiose and erroneous claims in Parliament” to “discredit the good work this government has been doing to attract investment and create jobs”. Minister, we disagree.

Another major concern is intentions to use native forest to support a planned export capacity of 800’000 tonnes annually.

Save our South now calls on Labor to stand up to the Liberals on this, to not tolerate this lack of transparency and utter disregard for the community of Dover and Far South Tasmania.

When will our government listen to concerns that Save our South has expressed for months. There are far more jobs and income in aquaculture and tourism than the Woodchip Port can offer.

There is far more value in maintaining the environmental integrity of Dover, Far South Tasmania and the Huon Valley rather than sacrificing this area to job destroying industrialisation.

What about investing in the alternative rail option linking the Derwent Valley with a northern port as suggested by John Livermore in a recent Mercury article. What about value-adding to our timber rather than selling it as woodchips which provides the lowest income and few jobs.

Why not also write to the Mercury and the Huon News.

Dover and the Far South are naturally beautiful … And no place for a Woodchip Port!

Be sure to add community@farsouthfuture.org to your address book or safe senders list so our emails get to your inbox