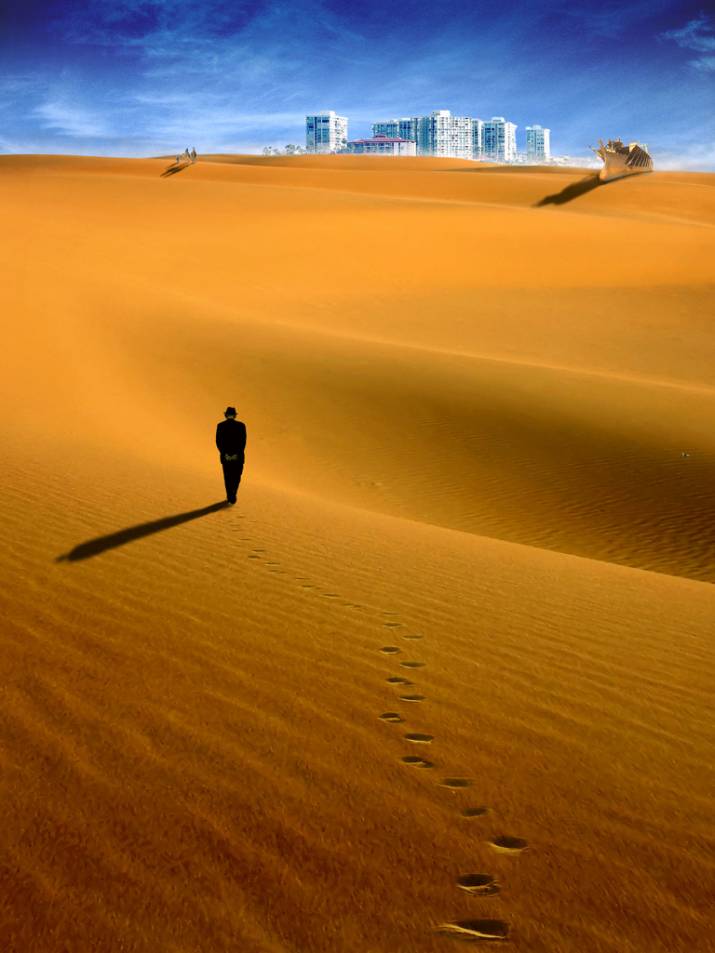 *Pic: Flickr, David Blackwell: ‘Walking home one evening in 2074 Paul wondered about the scientific breakthrough reversing the effects of climate change and its impact on his beach condo investment’ …

But, the lack of water, breakdown of crops, and sea level rise will lead to the creation of a dystopian world creating refugees by the score. Reticulated water problems have already been experienced in California, Mexico, Brazil, Bolivia etc, a recipe for community breakdown. Lack of water resources have been stated to be a background influence in the Arab Spring. Sea level rise has already been experienced in a number of locations.

It seems like a hysterical title, but it is promoted in all seriousness, people are dying through climate change, a very recent example is 33 deaths in Canada from heat stroke.

Professor James Anderson who alerted the world about the ozone layer has stated … “The chance that there will be any permanent ice left in the Arctic after 2022 is essentially zero,” Anderson said, with 75 to 80 percent of permanent ice having melted already in the last 35 years.”

He has also stated “Can we lose 75-80 percent of permanent ice and recover? The answer is no.”1

A number of Australian habitats are breaking down,2 including:

• the destruction of Gondwanan refugia by wildfire ignited by lightning storms in 2016;

• dieback of floodplain forests along the Murray River following the millennial drought in 2001–2009;

• large-scale conversion of alpine forest to shrubland due to repeated fires from 2003–2014;

• community-level boom and bust in the arid zone following extreme rainfall in 2011–2012, and

The IPCC is in the process of compiling research for a Report to be published later this year, leaked documentation indicates that the minimal standard set at Paris of a 1.5C above pre-Industrial times is virtually not attainable. 3

Robertscribbler a week or so ago gave warnings about weather forecasts for extremely hot weather to be experienced in the following days. Scientists have stated that a fingerprint of climate change is the increasing warmth of night time temperatures, Robertscribbler gives a later breakdown of the temperatures on the film he has attached to his article showing how night time temperature has been increasing along with other records.5 It has been a neutral ENSO period which does not bode well when there is a 50% chance of changing to an El Nino later in the year.6

James Hansen in 1988 created 4 scenarios to display what can be expected depending on how serious climate change was taken; contrarian fraud misrepresented two of his scenarios, and then argued he was wrong.7 The hyperlinks provide the details.

Just lately two studies have been published in relation to Antarctica; one showing the degree of melting of the Antarctic 8, interestingly the other study supports the first study in a way, on the basis as volume of ice is lost causes the bedrock is lifting slightly.9

A New York article warns that 800 million people are at risk in South Asia.11

James Hansen et al have provided research in relation to sea level rise, they postulate that sea level rise will be far greater than what the IPCC has predicted 12.

So if you don’t mind people dying or being placed in survival conditions; then continue to push the status quo; a business as usual approach promoting coal, gas and coal powered stations.The risks created for young people increase with time; the warning provided by Professor James Anderson is certainly not the only one provided by scientists.

Please prove me wrong, though to do so it will be necessary to debunk the references provided. The article is about the exceptionally high risk of ignoring climate change, the risks are increasing rapidly.

Though civil strife and war are the most likely matters; rather than, excessive warmth that pose the greatest danger as essential resources are lost.

*Keith Antonysen has been researching climate change for several years. Apart from reading about climate science, Keith also views pseudo-science presented by contrarians. It seems that the material referenced by contrarians is continually recycled. Doctoring graphs by contrarians is something that has been seen on occasion. Fossil fuel companies have known for decades about the impact of their products.