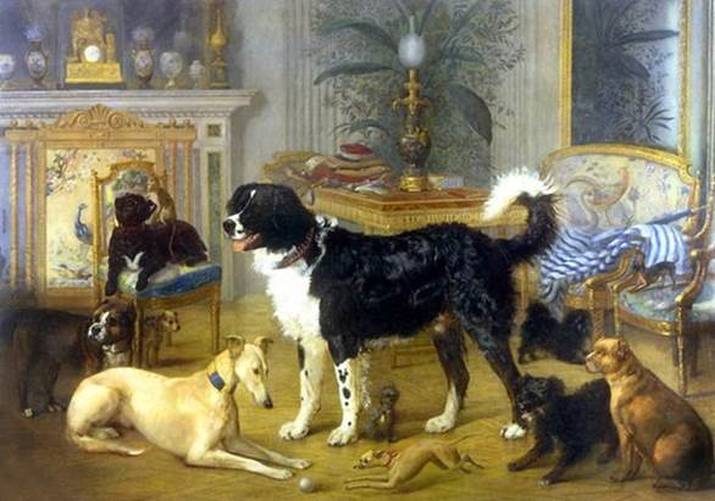 Part II: The Romanov family and their bulldogs

A painting of Tsar Alexander II’s pets by Shvabe of 1867 depicts in some detail 10 dogs and 2 monkeys. Of the dogs, 3 are non-standard French bulldogs, that is, English rose-eared bulldogs with cropped ears. The Grand Duke Alexander became Emperor Alexander III on 13 March 1881 when his father Alexander II was assassinated, his older brother Nicholai having died in 1865. After the death of his brother Alexander married his intended wife, Princess Dagmar of Denmark, who took the Russian name Maria Feodorovna in November 1866.

Maria Feodorovna’s sister, Princess Alexandra of Denmark, married the British Prince of Wales, later King Edward VII. It could be suggested that the British Royal Family’s acquisition of French bulldogs came about by gift through the Danish Royal sisters to whom the two sovereigns were married. In the late 19th century the Prince of Wales and his wife owned two French bulldogs, possibly acquired from Russia or vice versa. In this context it is interesting that the two dogs had the given names of Peter and Paul, possibly after the island fortress and its cathedral in St Petersburg in which the Romanov family are buried.

Photograph: Circa 1880. The children of the Grand Duke Alexander, later Tsar Alexander III.

Photograph: 1883. The Grand Duke Vladimir with his wife, the Grand Duchess Maria Pavlovna, and their cropped, rose-eared cream/fawn English bulldog.

This dog was probably represented in the first of the Fabergé hardstone portrait carvings in an exhibition of the Romanov collection of Fabergé held in St Petersburg in 1902. In later life the Grand Duchess went on to own a further three French bulldogs without cropped ears.

Photograph: Circa 1890. The Grand Duke Alexei Alexandrovich, seated, with a cream/fawn French bulldog with uncropped tulip-ears.

The Grand Duke Alexei is the third of the bulldog owning Romanov brothers but, unlike his brothers, his dog is of the French breed with tulip-ears, the Bouledogue Francais, a breed only just becoming popular in France at the time. This key photograph is also of great interest as the dog wears a Romanov black and white collar, a collar later to be seen on Fabergé hardstone statuettes.

In 1880 The Grand Duke Alexei was appointed by his brother, the Tsar, Commander-in-Chief of the Russian Navy. He was relieved of his command when the Japanese destroyed the Russian fleet at the battle of Tsushima on 2 June 1905. Alexei, still unmarried after a life of ‘Fast women and Slow Ships’, retired in 1905 to a luxurious Paris apartment in the Gabriel Avenue 38. In November 1908 Alexei dies, with a Sydney newspaper, the Newsletter dated 30 Jan 1909 describing the death and funeral of The Grand Duke Alexei in Paris: dying in the apartment of a Parisian actress. No one was present at the time of death but a French music hall singer known in Russia by the name of La Ballet[t]a … Alexis found nothing better to do than to come to Paris and display as publicly as possible his affection for La Balleta. La Balleta, who has been amply provided for out of imperial funds, was allowed to accompany the funeral cortege in a closed carriage.

Detail: Miss Balletta by Tade Stypka. The portrait shows her wearing a Fabergé bracelet, a gift from The Grand Duke Alexei, and a magnificent star sapphire.

It is recorded that the executors of his estate were left with a Fabergé invoice of 800 roubles for ‘A hardstone figure of a dog.’ It has been assumed that this is the statuette of Cody, presented to the actress Elizabeth Balletta by the Grand Duke Alexei, now in the Boston Museum of Fine Arts.

Photograph: November 1908. The funeral of the Grand Duke Alexei in Paris, with his magnificent hearse drawn by 6 driven caparisoned horses with black ostrich plumes led by the Romanov standards and his staff carrying his medals.

With no official family, the duke’s property was shared between his two surviving brothers, Vladimir and Alexander. With the sudden death of The Grand Duke Vladimir in 1909, his share of Alexei’s assets went to his wife, the Grand Duchess Maria Pavlovna, who dealt with the administration and payment of debts.

In May 1909 an auction was held in St Petersburg of surplus objects from the estate.

Agathon Fabergé was allowed to choose certain items for the firm before the sale. Fabergé wrote to The Grand Duke Pavel, the youngest brother of The Grand Duke Vladimir: On Friday 8 May I saw in the halls of Auction at Moika the second run of things that belonged to the late Grand Duke Alexei Alexandrovich in connection with it. I ask you to inform me when I could send for the things that Grand Duchess Maria Pavlovna promised to let me choose, and that she promised to let me have according to billing rates as you had told me earlier …

Fabergé must have completed the order for the bulldog puppy Cody, which had been paid for by the Duke before his death and given by him to Elizabeth Balletta, the success of the concept causing him to commission a second statuette called, I suggest, Custer. It is this bulldog statuette that was completed but not yet paid for, a: Hardstone figure of a dog, 800 roubles. This may have been sold by negotiation to the firm of Fabergé before the 1909 auction, for it remained with the firm until sold by their London branch in 1916.

Prince Felix Yusupov with his first miniature Bulldog Gugusse, painted before he went to Oxford circa 1909, with the dog’s drop ears changed and painted as tulip.

In 1914 Prince Felix Yusupov married Princess Irina Alexandrovna of Russia, niece of the Tsar Nicholas II. Prince Yusupov and his family owned a number of bulldogs, starting with the family bulldog Gugusse, bought with his mother in Paris in 1901. At the time of his marriage he owned Punch,, a tulip-eared French bulldog given to him whilst studying fine art at Oxford University between 1909 and 1913. On his return to Russia via Paris he orders, and is sent, a French bulldog bitch of unknown ear type, probably owned by Elizabeth Balletta, to breed with Punch. These two dogs produced a litter of puppies, at least one of which was probably the bat eared Ortipo given to The Grand Duchess Tatiana, his new cousin-in-law.

The purchase of a bitch with a Romanov pedigree from the mistress of his future wife’s late uncle would suit the thinking of this young, unconventional and daring Prince who was soon to murder Rasputin.

Photograph of the Grand Duke Alexei and Elizabeth Balletta with a cream/fawn coloured, tulip-eared French bulldog in Paris circa 1908.