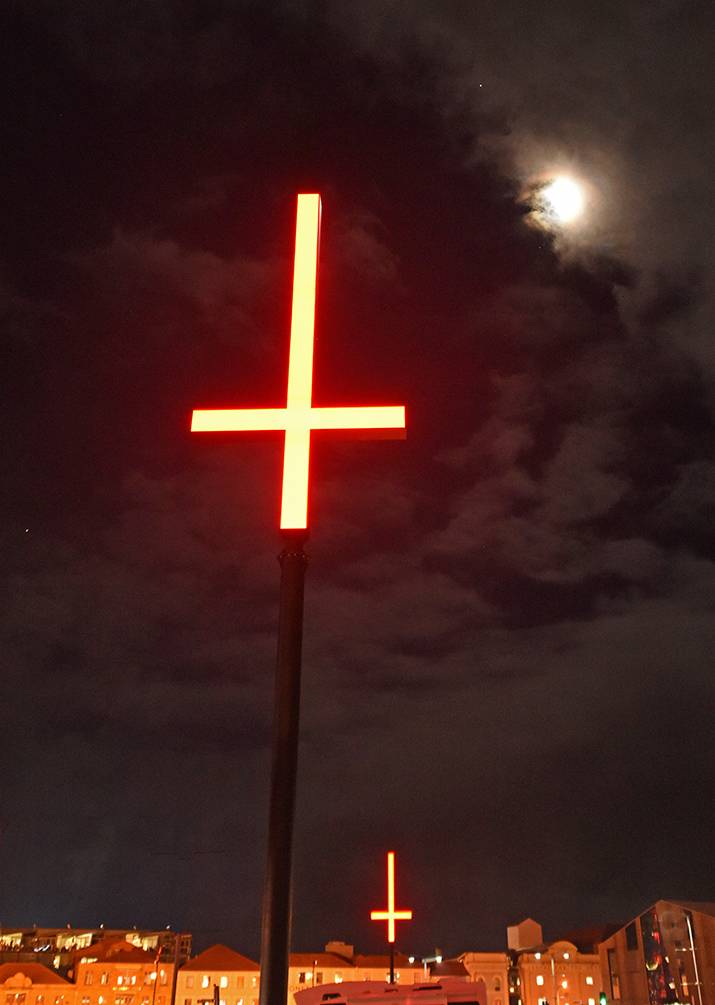 It’s time to weigh in, I feel, given the current debate on the above subjects. Re Dark Mofo, I do not like our public money being spent on it, and that’s not because of inverted crosses (although I do think it is petty and tasteless for someone to poke fun at, or denigrate, any faith in the name of ‘art’ – are there not enough other subjects out there to have a go at, if they must?).

The content of this particular festival is dubious in any case; the shock value, the noise, the light installations, all mostly carry with them some disturbing aspects, and I do think criticism of the show has been silenced in the name of tourism and its dollar. If people want this festival, let the organisers fund it themselves, and let it be a bit less of an inconvenience to ordinary folk by taking it out of the city centre.

There is no real reason why it can’t be held out at MONA in Berriedale, or on the Showgrounds, or some such (or, more creatively, why don’t they spread the cash advantage to a place that could really use it, like Oatlands?). Yes, sure, it would then have to be somewhat smaller, but – so what?

Hobart City Council already supports so many events – has anyone ever had the courage to ask: how many is too many? Shortly, we have the Festival of Voices; then there’s NYE, The Taste, the bi-annual Boat Festival, the weekly Salamanca Market, and so much else.

All require extra council resources, even when direct funding is not requested.

What good reason is there for more, and ever more events, when there is inevitably a limit to our resources? How much more in the way of rates do we want to pay? (I think you made an excellent decision by handing the Carol Services back to community groups, with some modest grants and some facilities made available. Not only was that sensible, but the quality of the many of the carol evenings actually went up.)

And this brings me to the second subject: ever more tourists. It’s no secret that all these festivals are largely being promoted and funded because they attract tourists. That may seem a good thing, but nobody is game to point out the downsides. So let me ask you:

One, ever more tourists means ever more flights coming in, ever more hire cars on the roads, ever more cruise ships in the harbour, and ever more resources being used by all the accommodation providers. And what have all these in common? They all use fossil fuels and create pollution and waste. Why does Tasmania allow itself to be duped by a handful of hospitality owners into thinking that the ever more urgent warnings by the UN about impending climate disaster do not apply to us? What will we tell our children when the air is no longer breathable after the last tourist flight has pushed the ppm air value too high (it’s already above 400!)? And when we run out of water as Cape Town already has? And when there’s no wilderness left?

Two, what has happened to our once-beautiful, charming, Georgian city? What was once unique and worth visiting has been destroyed in the name of developers. It has not escaped my attention that recently very large numbers of state-held assets have been sold – not just the (probable) Treasury! – but numerous sites around the city, like the forestry building, car and timber yards, and more. Will all these pop up as new hotels, too, and in private hands? Of course I realise that the Council cannot prevent what the state government does, but I think that the Council can take a stance. It is not only greenies who are ‘anti-development’, but ordinary folk like me, who would like to see any development being done with the everyday people of Hobart (who pay the rates!) as the primary beneficiaries, not the (often foreign) hotel owners. And I would like my grandchildren to have a chance at living in what was once one of the greatest little cities in the world – and I know that they have absolutely no chance of doing so, if things continue as they are.

There are many things we could do, but surely the most desperate one is to put a strict limit on tourist numbers (Lord Howe Island did it, so very successfully), and we are an island also, so this is something we can control. Yes, I know that is flying directly into the face of received wisdom indeed – and yet, it is a matter of life and death, even if nobody is willing to say so out loud. But making Tasmania ‘exclusive’ and hard to get to, for the sake of preserving (what little is left of) its wild beauty, its clean air, and its great live-ability, would guarantee a long-term stream of tourists at a sustainable level – we would be booked out for years and years to come. And yes, it would mean fewer tourists at any one time, so it requires that un-thinkable thing: overcoming the greed of the few for the sake of a better situation all round. It’s not an impossible task if we all work towards it.

And the Council can make a great start by not supporting dubious festivals.

PS:
The UN Intergovernmental Panel on Climate Change (IPCC) released its Fifth Assessment Report (the sixth is currently in the making) in 2014; there have since been further statements such as COP23. These are important documents of concern to all humanity: surely any council should be taking them on board in their policy making?

*Elizabeth Fleetwood ‘Elizabeth Fleetwood came to Tasmania in 1982; with her husband ran dairy farms, and then managed two retail businesses in the area while raising 3 children. Later, in Hobart, she ran a tourism business and is also the author of A Crying in the Wind, a history of Tasmania. Her biggest concern is the future of the next generation in the face of impending climate destruction, and what we should be doing about it.’