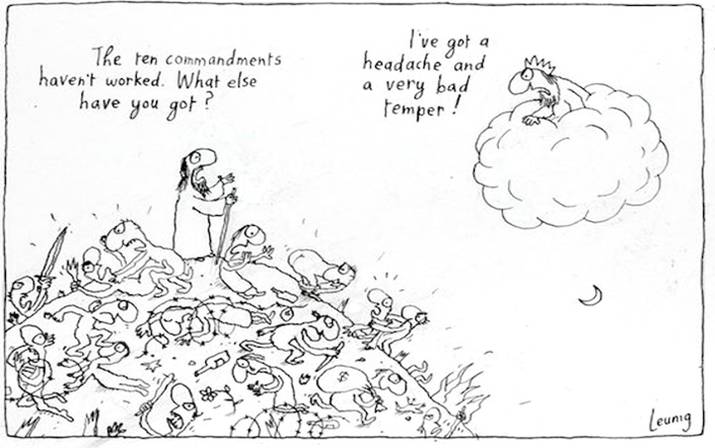 Without question the world’s affairs, its social structures, and our natural environment are in serious chaos.

Over-population, dwindling life-supporting resources, religious fanatical warfare, and prolific greed are some of the main contributors to this dire scenario. Yet there seems no operative doctrine to convey and guide humankind that there is something inherently wrong with our insular and corrupted thinking!

If the Ten Commandments were designed as a blueprint to live by then it has failed us in so many aspects. We have reached a crisis scenario, and to avoid a social and environmental disintegration we desperately require a collective philosophical and ethical rethink!

Unfortunately an Eleventh Commandment has already been flagged in more recent times, which does however connect with our contemporary ethics. – ‘ Though shalt not get caught’

Seriously though, the entire human race is in dire need for a universal Twelfth Commandment such as – ‘Though shalt not defile the earth and all life upon it’

This dictum placed above any belief system seems the only hope for any neo-humanistic future.

In 1980 Tasmania’s Democrat Senator Norm Sanders wrote a chapter for a conservation text about a hypothetical commandment that would guide living-earth principles in-line with a prosperous and healthy future for humankind. This of course related to the protection of our natural environment, which we all know underpins the future of our very existence.

Here is a condensed extract from Norm’s text. – ‘Respect Thy Earth’

Humans haven’t always been so oblivious to their life-support system. If our distant ancestors had been out of touch with reality as we are, we wouldn’t be here today. We aren’t doing a good job for our children. The support system is crumbling under the weight of the runaway technology, which is constantly creating new problems when it should be repairing past mistakes.

Technology in the form of the industrial revolution was what finally shredded the ancient truths of existence. The technology, which allows us to live temporarily beyond our environmental means was soon exported all over the world in the names of God, country and commerce. The ideological friction was so great that war was inevitable between the encroaching Europeans and any native inhabitants with the weapons to resist.

The American Indians had long lived in knowledgeable harmony with their environment and were appalled at what white men were doing to the land.

Where did we go wrong? Why couldn’t we temper technology with common sense?

The Judeo-Christian ethic often gets the blame for our environmental disrespect, probably with justification. Most of the world’s successful technological societies profess to being Christian. Christians are officially encouraged by the Bible. Genesis reads “and God blessed them, and God said unto them, be fruitful, and multiply, and replenish the earth, and subdue it: and have dominion over the fish in the sea, and over the fowl in the air, and over every living thing that moveth upon the Earth”

Good, solid exploitative stuff that. And didn’t the Lord burn a bush when he sent down the Ten Commandments to the wilderness-weary Moses?

The Ten Commandments themselves ignore relationships with the land and concentrate on relations between humans. Instead of living in close harmony with nature like the hunters of North America and Australia, Moses and his flock were farmers and city folk who feared and despised the wilderness.

However the Earth needed protection even in the biblical days. The Levites, the Gadites, the Reubenites, the Hamulites; all of them over-cut the forests and overgrazed the hillsides. Loss of trees eventually led to a more arid climate and greater hardship for the people.

The burgeoning of technology over the past two hundred years has thrown wild oscillations into the slow rhythm of natural balance. The accelerating changes on Earth became more and more obvious, but were usually ignored by the naturalists of the day who were more interested in exploring remote corners of the globe than in taking stock of the local civilised environment.

One exception was George Perkins Marsh, the unheralded father of environmental awareness.

Marsh was particularly concerned with the loss of forests around the world. Marsh, a determined world traveller, observer, and one-time US Ambassador to Italy, first published his magnificent book, The Earth as Modified by Human Action, in 1864.

A century before the Age of Ecology, Marsh wrote, “Man is everywhere a disturbing agent. Wherever he plants his foot, the harmonies of nature are turned to discords. The proportions and accommodations, which insured the stability of existing arrangements are overthrown. Indigenous vegetable and animal species are extirpated, and supplanted by others of foreign origin, spontaneously production is forbidden or restricted, and the face of the Earth is either laid bare or covered with a new and reluctant growth of vegetable forms and with alien tribes of animal life.

Marsh was particularly concerned with the loss of forests around the world.

Whilst Marsh was agonising over the impact of man on old world, settlers were making the same mistakes in places like North America and Australia.

The American Indians and the Australian Aborigines took care of their land because they knew it was all there was. The white man developed a tradition of using up the land and moving on. The waves of migrating Europeans altered the land wherever they touched, but nowhere was the impact as fatal as Australia.

Aborigines knew that nature and society are mutually dependent. They perform rites to ensure the fertility of the species, which they hunt and confirm the link between humans and the vital forces involved in nature. Land to them is something not to be owned, but part of history dating back to the Dreaming when the Earth was shaped. Specific places have both tribal and personal meaning and the land owns the people as much as the people own the land.

The reason that our own culture has lost its traditional wisdom is that our awareness has been dulled by the pushers who keep us hooked on all sorts of expensive distractions. Their cry is consume, rather than observe. Consciously or unconsciously, the materialism pushers are deathly afraid of the few remaining wilderness areas on Earth. People who venture into these areas come out changed: they think they see the new emperor has no clothes, they are, in short, aware.

Politicians, bureaucrats and industrialists join forces to stamp out wilderness and its radicalising influence. We are supposedly happy to swallow the line that life is getting better every day because of our increasing consumption of electricity and resources. To question that premise is to threaten the entire basis of the modern consumer society.

Modern leaders don’t lead, they merely tag along behind an exponential growth curve. Lack of enlightened leadership coupled with massive unguided technology is rapidly making the world uninhabitable for man.

Whether for its own sake or ours, the Earth needs protection.

Edward Abbey, a militant and articulate defender of the American west, once wrote in an optimistic moment,…”perhaps in the decades to come we can gradually force industrialism underground where it belongs, and restore to all our citizens of our nation their rightful heritage to breathable air, drinkable water, open space, family farm agriculture and a truly democratic political economy.

For Judeo-Christians and our hypocritically religious elders, thoughtful words won’t be enough. We need to be ordered around.

And so the twelfth commandment should read as Norm stated – “Respect thy Earth, and the creatures and the plants upon it, so that thy days and thy children’s days will be long and fruitful”.

The Aborigines, of course, knew it all along.

*Ted Mead was not raised with any religious beliefs beyond his own will to explore and appreciate the natural world around him from a very early age. Ted however was exposed to the follies of the Bible having child playmates from a strict Catholic family who attended church regularly, espoused and quoted the doctrine verse and chapter constantly, and never questioned the ideology of what was imposed upon them. Such practices always mystified Ted, who as a child, never understood the impacts of mind control until he became a mature adult when he began comprehending humankind and their detachment from nature. Since that revelation it has been nothing but frustration and disappointment to see how misguided religions have permeated across the globe and aided in the wanton destruction of the Earth’s exquisite natural wonders, often driven by the dogmatic Genesis message. – And of course insatiable human greed always followed and prevailed.