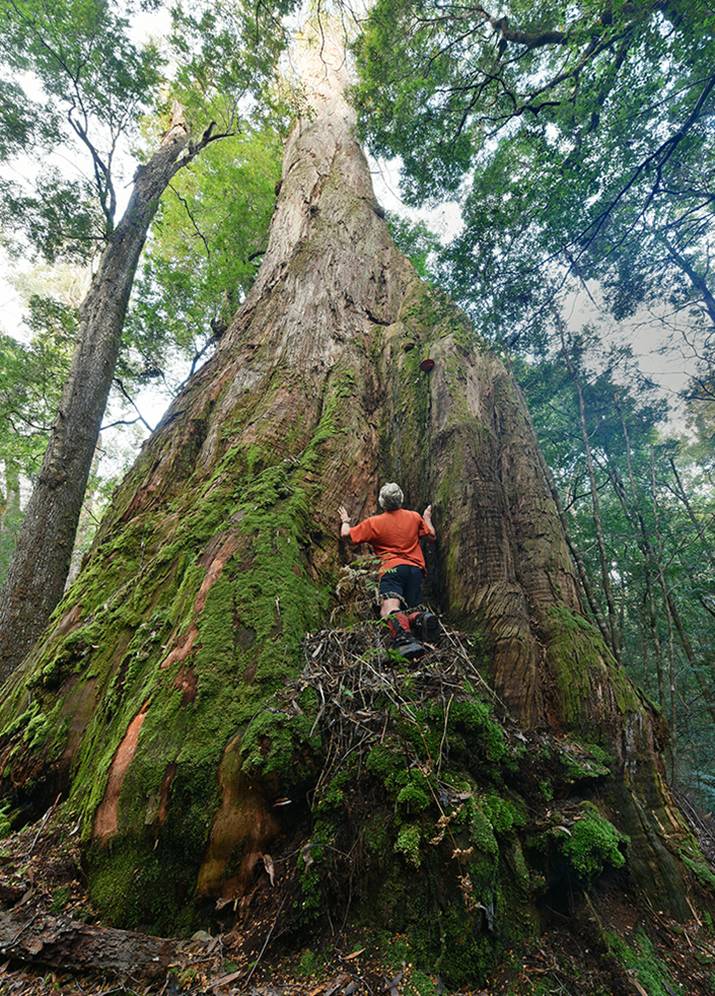 Almost half a century ago two track cutters working in a remote section of the Tarkine stumbled upon a giant eucalypt of unbelievable proportions. The exact location of this magnificent discovery was never accurately recorded, and so to date its whereabouts has remained a puzzling mystery stirring wonder to whether this extraordinary tree is still alive today?

As part of the campaign to protect large tracts of forest in the mid 1980s I began searching for huge trees. Places like Wayatinah, Beech Creek, and the Styx, Picton, Huon, Weld and Florentine Valleys were all sources of many exploration trips because discoveries of spectacular forest always added weight to the political momentum to protecting them.

Seeking out this grand one in the Tarkine has become a pastime for a few people who wish to see the last of these veterans protected for posterity. However several enthusiastic group excursions amidst the dense horizontal scrub has failed to find this elusive giant.

Like an old fisherman’s story of the big one that got away, so is the existence of this massive eucalypt. Given the numerous square kilometres of slow moving jungle out there then locating this tree seems akin to finding a small needle in a very big haystack. In parts of this dense forest you could be only tens of metres away and have no idea you were anywhere near it.

So how big is huge?

The story of the tree’s discovery goes along the lines of when the track cutters were making their way through the bush they were suddenly confronted by a barrier before them. It seemed in that moment they had reached a cliff before it reverently dawned on them they were actually standing beneath a massive eucalypt.

One could only imagine the sense of awe they felt at that moment of revelation!

The track cutters measured the tree to be 33 metres in circumference. This girth measurement exceeds the biggest known eucalypt tree in Australia, the Kermandie Queen near Geeveston, by near10 metres.

This tree also has a greater girth than the giant General Sherman’s sequoia tree in California. So that’s big!

One expedition in the search of this tree began with a helicopter over-flight in hope that all would be revealed from the air, though any tree of such an age would most likely have had its crown blown out, and was unlikely to reveal itself through height.

In my view the existence of such a tree defies logic as it would probably be in excess of 700 years old, and should have senesced its life centuries ago.

What is the likelihood of the tree’s existence? Given the age structure of the forest I have observed in my wanders out there, this enigmatic eucalypt is a huge anomaly on all accounts.

To be such a massive individual then this tree must have escaped a previous fire around 350-400 years ago, and is growing in absolute ideal environmental conditions.

So what should happen with this iconic tree if found?

If this grand eucalypt is finally located it would become a national icon and a notable drawcard to promote the Tarkine region. The question begs … should this tree be made accessible for everyone to see? If this is considered then a road would certainly be pushed into yet another wild area. Such associated tourism infrastructure would impose negative impacts to the pristine environment, and any significant disturbance around the base of the tree would probably see its demise.

Rumour has it that when a renowned tourism entrepreneur heard of the big tree’s existence he stated that “when the tree is located he was going to take a lease out over the region”. In his blind obsession he could only see the $$$ behind a commercial exploitation of yet another natural icon.

Such self-interest is a classic example as to why this giant should probably remain a secret.¬¬

The tree’s mysterious location alone beholds fascination, which conjures another dimension to the wild unknown reaches of the Tarkine, and for this reason it may be best if it is never found?

By now many readers are seriously questioning the tree’s existence, though at least it can provide a good source for a tall story they can tell to their grand children.

*Ted Mead continues to be bewildered by the whereabouts of this giant eucalypt, but given the credibility of those who discovered it he finds it difficult to dismiss it as a furphy. Ted claims that the riddle of this elusive tree gives us some wonder that extraordinary occurrences probably do occur. This is just one example of the inspiring wonders of our natural world that may fortunately be, through its remoteness, beyond the reach of human exploitation.