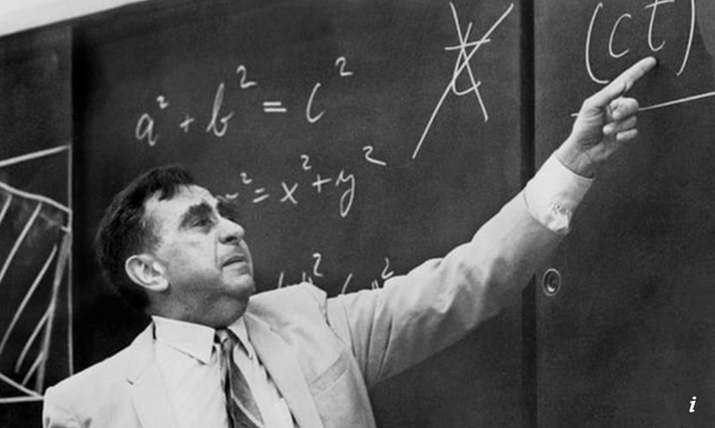 *Pic: Physicist Edward Teller pointing at a formula on a blackboard on 22 May 1968. Photograph: STF/AFP

In 1959 Hungarian born Physicist Edward Teller made a surprisingly overt speech at the ‘Energy and Man’ symposium for the centennial of the American oil industry. Teller’s words came with a notable warning that the ongoing burning of fossil fuels will pose inherent dangers for all life on earth if it is continued unabated. But did anyone take note?

Here are some extracts from his speech

Ladies and gentlemen, I am to talk to you about energy in the future. I will start by telling you why I believe that the energy resources of the past must be supplemented. First of all, these energy resources will run short as we use more and more of the fossil fuels.

But I would […] like to mention another reason why we probably have to look for additional fuel supplies. And this, strangely, is the question of contaminating the atmosphere. [….] Whenever you burn conventional fuel, you create carbon dioxide. [….] The carbon dioxide is invisible, it is transparent, you can’t smell it, it is not dangerous to health, so why should one worry about it?

Carbon dioxide has a strange property. It transmits visible light but it absorbs the infrared radiation which is emitted from the earth. Its presence in the atmosphere causes a greenhouse effect [….] It has been calculated that a temperature rise corresponding to a 10 per cent increase in carbon dioxide will be sufficient to melt the icecap and submerge New York. All the coastal cities would be covered, and since a considerable percentage of the human race lives in coastal regions, I think that this chemical contamination is more serious than most people tend to believe.

Teller was asked to summarize briefly the danger from increased carbon dioxide content in the atmosphere in the 20st century. The physicist, as if considering a numerical estimation problem, responded:

“At present the carbon dioxide in the atmosphere has risen by 2 per cent over normal. By 1970, it will be perhaps 4 per cent, by 1980, 8 per cent, by 1990, 16 per cent [about 360 parts per million, by Teller’s accounting], if we keep on with our exponential rise in the use of purely conventional fuels. By that time, there will be a serious additional impediment for the radiation leaving the earth. Our planet will get a little warmer. It is hard to say whether it will be 2 degrees Fahrenheit or only one or 5”.

“But when the temperature does rise by a few degrees over the whole globe, there is a possibility that the icecaps will start melting and the level of the oceans will begin to rise. Well, I don’t know whether they will cover the Empire State Building or not, but anyone can calculate it by looking at the map and noting that the icecaps over Greenland and over Antarctica are perhaps five thousand feet thick”.

His calculations have proved to be incredibly accurate!

So at the American oil industry centennial it was warned of its civilisation destroying potential, and in proceeding years the industry commissioned a report on air pollution from the Stanford Research Institute. The 1968 report’s warning on CO2 was notably direct –

“Significant temperature changes are almost certain to occur by the year 2000, and these could bring about climatic changes. […] there seems to be no doubt that the potential damage to our environment could be severe. […] pollutants which we generally ignore because they have little local effect, CO2 and submicron particles, may be the cause of serious world-wide environmental changes”.

Edward Teller may have been the first to warn of the tragedy now looming before us. By the time he departed this world in 2003 the American Petroleum Institute was full swing into denying the climate science it had been informed of decades before. This was compounded by the copious $ millions the industry poured into combating the climate change belief.

The 21st century has seen the oil industry relentlessly attacking the Intergovernmental Panel on Climate Change, and fighting climate policies wherever they arose.

And now the American fossil fuel industry has their puppet Trump to peddle their dogma.

“The oil industry knew about the dangers of fossil fuels years ago, and then spent decades from hiding the truth from the public.”

“The oil companies knew from 1959 on, and they did their own study, and knew there would be global warming and climate change happening because of fossil fuels, ….and on top of it, it would be risky for people’s lives” and “that it would kill people and they would get cancer”

Arnold is not the only one suing big oil, so is New York City, and several other cities in California.
In a change of events resulting from current civil litigation, even the oil industry itself acknowledges that there is human-caused climate change, but there still remains a movement of deniers.

Meanwhile in the USA Trump and the EPA continue to downplay climate change
https://www.huffingtonpost.com.au/entry/epa-climate-adaptation_us_5abbb5e3e4b04a59a31387d7
Youth of American challenge the oil industry through law suits –

Perhaps the youth of Australia will rise and challenge the fossil fuel burning industries in Australia?

We live in hope!

Ted Mead is forever frustrated and disillusioned about human apathy towards mitigating the global mess that the fossil fuel industry has imposed across the globe. Ted believes the transition to a renewable energy world is providing a welcome momentum towards change, but he feels our attitude to unite and progress unanimously in our thinking is still seemingly far away.