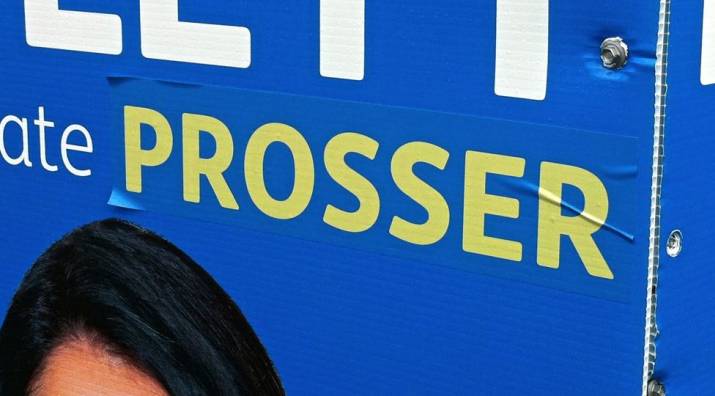 Will the Liberals become known as the Party that ate Prosser?

If placards are the means to secure the poll numbers, then the Liberals are on a winner.

Remember all that money they had to bludgeon the voter in the State election, and how the cash bought a wall of blue placards across Tasmania?

The cost of placards for the Liberal candidate in Prosser will be the price of a sticky label, stuck over the word “Lyons”.

Why does this matter?

Unlike the State election, any Legislative Council candidate can by law spend no more than $16,500, so the less that is spent on placards, the more there is to spend on other advertising.

With so many recycled Liberal Party placards now pressing into Prosser, some questions may rise with the overlap of the State election into the Upper House run by a party candidate.

In the Upper House election, the rules are stricter, tighter, and come with risk in any breach.

Recycling placards from a recent State election might not seem like a problem, but if it is political party funding, is there a question seeking an answer?

The act further defines the ‘expenditure period’ as, “in the case of a periodic election, the period beginning on 1 January in the year in which the election is to be held and ending at the close of poll”.
page 13, as above (section 3 and 5(1)(b)(ii) Electoral Act 2004)

On the face of it, does the recent State election material need to be included in expenditure, if it can be used legally?

Having driven around a large portion of Prosser, scouting out the terrain, the number of Liberal Party placards is quite terrifying.

The act spells out, “Expenditure which was incurred before the relevant period in respect of goods and services which are supplied or provided or made use of during the relevant period, is included in the definition of electoral expenditure.” page 13, as above (section 3 and 5(1)(b)(ii) Electoral Act 2004)

All may be good, but who will ask the question?

Is there a cloud over the use of Prosser placards purchased for the Lyons election?

And if the Liberal Party purchased those placards, can they be used at all in the Prosser campaign?

AND ON ANOTHER MATTER

I love going to Agfest, but this year, I am barred.

I rang Agfest and asked the organisers if I could do any election activity at Agfest.

Something about spruiking not permitted.

And that Agfest is a non-political event.

The big political parties will probably be there, planned months ago, spruiking for votes in Prosser in their paid spaces.

I asked if I could take my election wheelbarrow around as I enjoyed the sights and sounds of this great farming carnival.

I offered to pay.

Something about spruiking not permitted.

Unless an independent has booked a space at Agfest many months ago, and is prepared to spend 3 days out of the campaign in Prosser, Agfest may fall by the way, as it now has to for me.

Politics is part and parcel of the rural community, but only big party politics may be seen at Agfest, even though many Prosser voters will be there.

So many Prosser voters will be at Agfest, that the Electoral Commission will have a polling booth set up.

But I cannot be there.

Now where will I go looking for votes?

And then another question rises.

If the major parties are at Agfest promoting their candidates in the Upper House election, will this spruiking breach the electoral act for the Upper House?

Perhaps someone visiting Agfest can observe if the major parties are working within the law.

*ABOUT Kim Peart ~ Born in 1952, Kim was raised in Howrah when it was farmland, played in the old fort in Bellerive, and rode the old ferries to Hobart to go to movies. Kim plied the life of a visual artist, with a studio in the Salamanca Arts Centre, and then in Murdunna, and later in Bellerive in the old bakery. In 2007 Kim was listed among Tasmania’s top 200 movers and shakers for “An urban bushland conservationist who has worked tirelessly over the years to maintain walking tracks and protect wildlife from the encroachment of bush-front housing developments.” Kim is campaigning for an Australian Convict Trail, with the Tasmanian leg running from the ferry in Devonport to Port Arthur, along with foot and cycle paths by Tasmania’s highways and roads. After being at the launch of an Australian Space Agency last September, Kim is seeking ways to create employment, careers and new enterprise in Tasmania with the global space industry. Kim now lives in Ross, with his wife Jennifer, and a small tribe of alpacas.