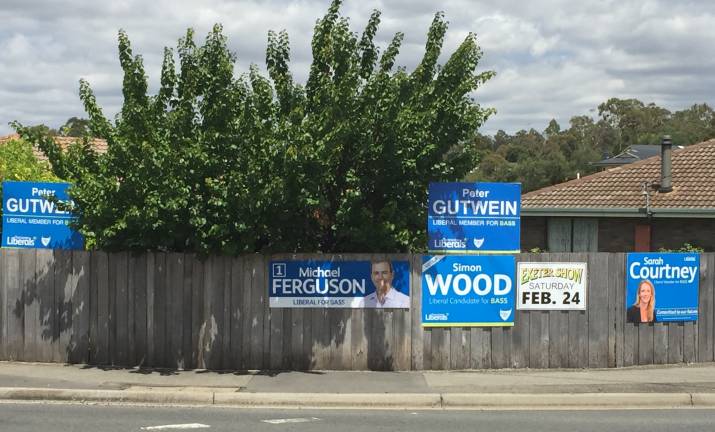 Mercurius, the Roman god of financial gain, commerce, trickery and thieves, bids welcome to the election guru Windi Ding who is visiting V. D. Land as the Tasmanian government’s senior advisor on how to lose the election.

Over to you Windi, and a big welcome from TT and all our readers at the start of our new season.

Readers, perhaps you have noticed the Sea of Blue surrounding every city, town and village as the visible evidence of the power of the gambling lobby to subvert the system while the Tasmanian born-to-rule strive to lower the bar using their clever new advertising slogan: Taking Tasmania to the next Level.

In less than three years: Hodgie has petitioned the United Nations to remove the World Heritage Listing over the iconic Western Tiers for clear-felling and burning; Barnett has played a blinder over the Triabunna woodchip mill; Rocky enabled the salmon industry to pollute the pristine waters of Macquarie Harbour, and the team has now hopped into bed with ex Labor premier Paul Lennon to advantage the gambling lobby.

The question is – [i]can the Libs lower the bar still further?[/i]

Hodgie is not taking my advice despite paying my enormous consultancy fees.

We see before us an army of the same old faces nailed up in a Sea of Blue generously funded by the much loved one-armed bandits.

Some, such as Shelton, Gutwein and Hidding, are living national fossils still promoting the clear-felling and burning of our beautiful island landscape to benefit a billionaire from Sarawak. They use the good offices of their newly minted [un]Sustainable Timber Tasmania in an ongoing epic pioneered by the much admired Forestry Tasmania which now costs the hard-pressed Tasmanian taxpayer a million dollars a week to keep on the road – but what is a million a week if it keeps the boys happy?

Cynics say that this burning is designed to force those who cannot breathe, and the tourists, the undeserving poor and those addicted into those magnificent entertainment centres that are our Tasmanian pubs and clubs. If Hodgie and his team are to be believed our social fabric will completely implode without the $110 million a year so kindly donated by the players to the bandits when and if they are rounded up and shown the door.

Hodgie and his merry men are still light on female candidates, and this is sad because they come in real handy when it comes to elections.

The guru is a lady from Dallas known to be a descendant of Daniel Boone and now close to my old friend Mercurius. She considers the “toothpick” (as the Texans call the penile bone of a raccoon) to be the ultimate good luck charm. During our one brief and difficult meeting I pointed out that another Texan, Davy Crockett, cried out: “I can’t get no satisfaction” clutching his silver mounted “toothpick” surmounted by his famous coonskin cap as he breathed his last at the Battle of the Alamo.

This epic battle has made this special bone [i]de rigueur[/i] for all self-respecting rednecks from Tennessee to Tasmania.

Not to be put down by this somewhat dangerous thought, Jerry promptly drew my attention to the sledgehammer penile bone of the Walrus whose size has caused we ladies To talk of many things: Of shoes, and ships , and sealing wax – Of cabbages and kings …

I have now acquired three Shawnee silver-mounted lucky bone pipe stoppers, a Pipe of Peace, and a walrus whacker made by the Chukchi Eskimos to be shared, smoked, tamped and waved to bring good luck when I meet Hodgie for my TT election interview.

Perhaps these new-found charms will cast their spell thereby causing us to finally deck the bar – thereby Taking Tasmania to the next Level.

If so, then will Cassie and Becks come rushing out from behind that famous Looking Glass and claim that only they know the answers as to why the sea is boiling hot, and whether pigs have wings?

• Nick O’Malley, SMH: Sydney family takes 54 times more revenue than Tasmanian clubs from their pokies With the Tasmanian election becoming a battle over pokie machines, new research shows Tasmanian clubs keep just 0.9 per cent of their pokie revenue, while the Sydney-based family that owns a monopoly license over the machines in the state, keeps 49 per cent …

• The Australia Institute: Tasmanian club and pub pokies revenue: 0.9% to clubs, 48% to Farrell Group A report released today by The Australia Institute Tasmania written by Dr Charles Livingstone from Monash University has found that The Farrell Group’s share of EGM revenue (47.8%) far exceeds that of the clubs that house many of the poker machines, with the Farrell family reaping fifty-four times more than that derived by clubs which took just 0.9%. “The big winners from pokies in Tasmania are the Farrells, taking nearly half the net revenue,” Senior Lecturer at the School of Public Health and Preventive Medicine at Monash University, Dr Charles Livingstone said. “Clubs end up with less than 1% of the money that goes into the pokies. The Farrells take nearly half,” Livingstone said. Leanne Minshull, the Director of The Australia Institute Tasmania commented on the report: “The clubs and hotels are not getting much, and neither is the taxpayer. The Farrells a reaping $19.4 million more than the Tasmanian government … ”