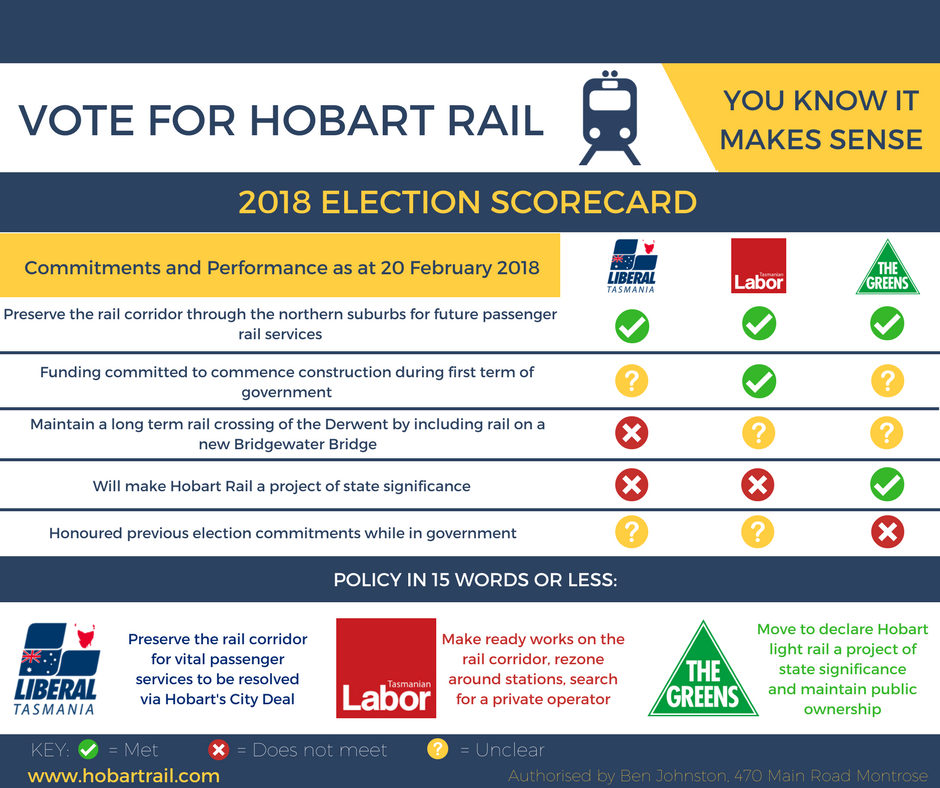 The proponents of Light/Passenger Rail in Hobart have released an election scorecard to drill into each parties commitment to rail and also consider past performance.

Group President Ben Johnston says, “it’s been a familiar cycle since 2010, where all parties jump on board during the election campaign, then lose momentum once in Government. However, with a transport and housing crisis its more important than ever to get Hobart Rail moving!”

In recent months, Infrastructure Minister Rene Hidding has compensated for a term of inaction, by referring the Hobart rail project to Infrastructure Australia and suggested Federal funding under a Hobart City Deal. “But money talks and we can find no ‘dollar commitment’ to progress Hobart Rail in the City Deal announcement”, Mr Johnston says.

At this stage in the campaign, Labor appears to be just on top with its passenger rail to Bridgewater policy, backed by a $14m commitment to make ready works in the first term of government.

The Tasmanian Greens score badly on past performance since the 2010-2014 Sustainable Transport Minister, Nick Mckim, failed to honour a pre-election commitment to implement light rail in the first term of government or even seek Federal funding.

Disappointingly none of the current parties seem to have a clear policy on a long term rail crossing of the Derwent, with the current Government’s new bridge design not including rail.

The Scorecard is a dynamic document and we look forward to clarifying or improving each parties position as we head toward the State election.
Ben Johnston President Hobart Northern Suburbs Rail Action Group