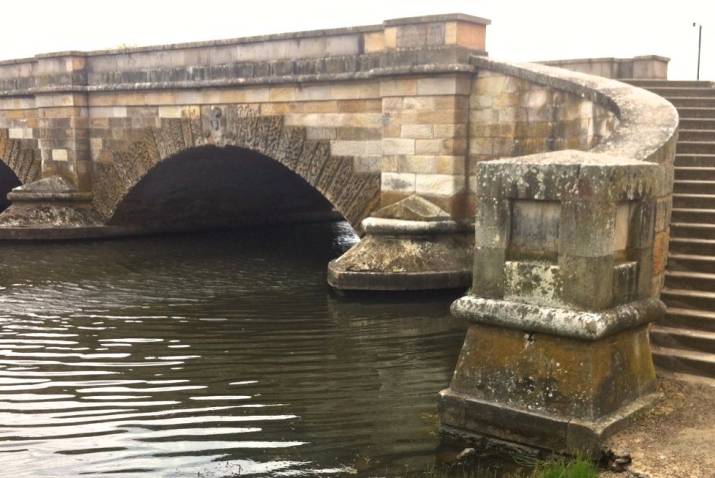 It is a tough process, with few places in Tasmania granted National Heritage status, and with the only application under consideration at present being Willow Court in New Norfolk, which is going through a second bid, and is three years into that process.

Our humble efforts were unsuccessful, but the matter has now captured the imagination of the Northern Midlands Council.

At the last municipal meeting on December 11th, the councillors voted to lodge the next application, which is great news.

Dr Bolton spoke at the meeting about the need for a flood plan to protect the bridge, and its priceless carved art by convict stonemason Daniel Herbert.

Flood damage happens when logs come hurtling down the river and strike the bridge.

Such logs don’t just hit the bridge, but they hammer the stones, repeatedly, as they get stuck against the bridge.

In the last flood this year a large piece of stone was broken off the bridge, demonstrating the problem.

The Tasmanian Government has spent a king’s ransom since 1970 restoring and maintaining the Ross Bridge, as well as having 3-dimensional digital images made of all of the 186 carvings in 2004, and repeated the exercise this year.

Why there is no flood plan in action to protect the carved art of the Ross Bridge, is a mystery that needs the wisdom of the Premier to answer.

For now, we have a bonus, with the elected councillors accepting the need for a flood plan for the Ross Bridge, and deciding to chase down those responsible in the Tasmanian Government for answers.

A MUCH LARGER CHALLENGE

Securing the National Heritage listing of the Ross Bridge would be one step along the road to presenting this amazing bridge, like a bride to be married to the heritage imagination.

A companion bronze statue could be included of his wife Mary, arriving with a hamper for lunch.

Daniel and Mary were newly married as he worked on the bridge, and their passion may have been an influence in the carved art, after years of lash and chain in the harsh convict system.

Creating the interpretation installation could also be the beginning of a heritage park being developed along the Macquarie River and around the Uniting Church on the hill, with convict trails leading away among the surrounding convict sites.

Ross is like a mini Port Arthur, with convict made buildings, a burial ground where Herbert’s memorial can be found, a Convict Female Factory, and a Commissariat’s Garden, where the food was grown for the convicts.

WHAT ABOUT ALL THAT ART?

If the Ross Bridge were a painting by John Glover, it would be in a museum of colonial art, where the work could be examined and studied in detail.

Any scholar, artist or visitor who would like to examine and study the art of the Ross Bridge, is now quite frustrated in their wishes.

Who can walk on water?

Even from the river, the viewer would be looking up at the carvings.

One solution to this problem, is to use the 3D digital images the Tasmanian Government has had made, at public expense, and present these in a way that anyone can examine and study the art of the Ross Bridge in detail, and from any angle.

The Council owns a building near the bridge where this could happen, with the old Ross Clinic, but getting the Council to talk to the Tasmanian Government about this happening, is quite a daunting challenge.

If anyone runs into the Premier at a Christmas party, ask him to have a chat to the Northern Midlands mayor about this happening.

We can all do our bit to lift the history game, especially when it comes to the heritage assets at Ross.

HOW MUCH IS THE ROSS BRIDGE WORTH?

With tourism a growth industry in Tasmania, Ross may find growth in popularity as a heritage town.

We read, “Tasmania is attracting international tourists at a rate that outperforms any other state — delivering a multimillion-dollar boost to our economy. An official survey of international visitors reveals 267,000 tourists from overseas came here last year, an astounding 33 per cent rise on the year before. And in a surprising finding, the International Visitor Survey shows twice as many Chinese tourists are now coming here than people from New Zealand — and the 35,000 visitors from the world’s most populous country spent $83 million here, an increase of 63 per cent on the year before. But the US remained the top source of international visitors, with 40,000 coming last year, an increase of 25 per cent.” ~

So there is every reason under the Sun to improve the heritage value of Ross, and care for the magic of this unusual town.

To design and drive a heritage plan for Ross, I wonder if a heritage committee needs to be founded for Ross, to include Tasmanian Government, Council and local representatives.

Just as Port Arthur has a specific organisation to manage that heritage icon, and the Convict Female Factory in South Hobart, to get heritage planning right in Ross a similar approach may be needed.

Anyone who would like to help keep the magic going in Ross, can connect with the action, directly, or at a distance.

Folk can adopt Ross as a place to come to and do landcare work, to which we add heritage care.

There will be weeds to pull, trees to plant, tracks to make, and grave sites to care for.

Participants will get to have a direct say on shaping the heritage and landcare needs of Ross.

We are investigating the prospect of creating a museum of farming in Ross, which can include steam engines, and smithing.

Folk can also connect with Ross via the virtual world, where we will be creating a virtual Ross for different times, beginning with 1836, when the bridge was opened by Lieut. Gov. George Arthur, the old bridge blown up, and a great bonfire lit to rage into the night.

We hold a great bonfire in a Viking theme on the first Saturday in July each year, to burn a Viking boat, and create fire drawings.

And we hold a Ross Bridge Festival, where we aim for the first sandstone carving challenge happening one year soon.

We have another meeting coming up soon, to celebrate the Council rising to the challenge of seeking National Heritage listing of the Ross Bridge.

*Kim Peart is a visual artist, researcher and writer living in Ross, where he takes an interest in the history and heritage of this magical town.

Dr Bolton provided the following statement from which she read:

My purpose in speaking here tonight is to urge you to consider preparing a flood protection plan for the Ross Bridge.

When the Macquarie River is in flood, debris carried by the river impacts the bridge and causes damage.

During the most recent major flood event, a large sandstone block from one of the cutwaters on the southern side of the bridge was dislodged and fell into the river where it broke apart. I understand the Department of State Growth is organising the replacement of this stone.

The scale of this damage indicates the force with which tree trunks and other debris carried by floodwaters can strike the bridge.

Of particular concern is the risk to the unique carvings along all the arches for which the ross bridge is famous.

I urge the Council to collaborate with the Tasmanian State Government to develop a strategy to protect the Ross Bridge in times of flood.

One option would be to employ some form of debris control structure upstream from the bridge to capture large objects before they can do any damage. A design that does not detract from the heritage of the bridge or adversely impact the natural environment would need to be developed.

In 2003, the Department of Infrastructure, energy and Resources as it was then called, commissioned the preparation of a conservation plan for the Ross Bridge.

Perhaps surprisingly, this document only mentions in passing the risk of flood debris to the bridge and does not include a specific plan to deal with major flood events.

The authors of the conservation plan recommend that it be reviewed at least every ten years. As this document is now 14 years old it may be timely to encourage the state Government to commission an updated conservation plan for the Ross Bridge and ensure that a flood protection plan is included.

This is a situation where prevention is better than cure. It is much better to take measures now to prevent further flood damage than to have to keep making repairs and most crucially, to continue to place at risk the priceless artwork of the Ross Bridge.

I urge you to work with the state Government on this matter to secure the future of the ross Bridge.

Mr Peart provided the following statement from which he read:

The Ross Bridge is a valuable asset for the Northern Midlands.

I support this motion to seek National Heritage Listing.

I suggest that a visit to New Norfolk may be helpful, to examine Willow Court round two National Heritage Listing application.

A plan for around the river, north and south of the bridge, is needed.

There are other convict sites, including the Convict Female Factory also worthy of National Heritage listing, which can be a later application.

I wonder if Ross needs a heritage plan to guide the protection, management and interpretation of its unique convict heritage.

Ross is a little Port Arthur and its visitor appeal will grow.

The Australian Heritage Council document ‘Guidelines for the Assessment of Places for the National Heritage List’ details the comprehensive process involved with the nomination process. Given that a compelling case needs to be presented, it is highly recommended that nominations be prepared by a skilled historian or archaeologist.

In early 2016 Mr Peart submitted a nomination for the listing of the bridge on the National Heritage List. The application received the support of the Ross Local District Committee. The application was not successful.

Mr Peart has again approached Council to assist with the nomination of the bridge for the National Heritage List.

That the matter be discussed.

That Council allocate $1,600 in the 2018/2019 Council budget to fund the preparation of a nomination of the Ross Bridge for National Heritage Listing.

That the matter be discussed.

i) allocate $1,600 to fund the preparation of a nomination of the Ross Bridge for National Heritage Listing; and

ii) actively seek discussions with the State Government regarding flood plans for the Ross Bridge.

The document referred to by Dr Bolton.

Old Ross Clinic, near the Ross Bridge, owned by the Northern Midlands Council, which could serve as a home for understanding and knowing the art of the Ross Bridge

This map shows the three main heritage attractions in Ross, where a heritage park next to the Uniting Church would be at the centre of interest

This map shows just how much public land there now is around the convict heritage attractions in Ross, which is in need of imagination. The grounds of the Uniting Church are included, as they are open to the public now, as is the church

There is immediate potential for quite a few new walking trails around Ross, for the benefit of denizens of and visitors to Ross. Crown land road reserves are public land, which anyone has a right to walk along now