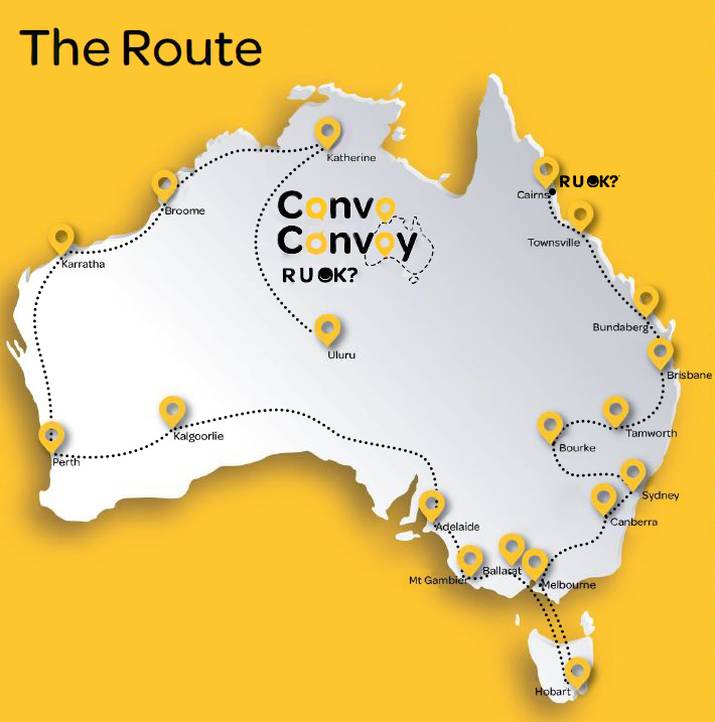 Today R U OK? is launching the Conversation Convoy, a six week journey around Australia which kicks off in Uluru, aiming to give more people the confidence to support those who are struggling, while raising awareness of support services across the country.
The tour begins on 1 August and will cover 14,000 km visiting over 20 communities in regional, remote and metropolitan locations, finishing in Cairns on R U OK?Day, 14 September.
The Conversation Convoy will build on the question “are you ok?” by reinforcing the 4 Steps to a conversation, empowering Australians to ask, listen, encourage action and check in.
Thanks to the Audi Foundation, the four yellow SUV’s each represent one of the conversation steps and will roll into each location and be a major part of a series of community-based events. The activities will help people of any age, learn the steps in a fun and interactive way.
High profile ambassadors will be joining different legs of the trip including Ben Lee, Khan Porter, Commando Steve, Daniel Conn, Steven Oliver, Travis Collins and Jodhi Meares.
The Conversation Convoy initiative comes off the back of a recent national omnibus survey conducted by Colmar Brunton which revealed one in three people don’t feel comfortable asking the question, “are you ok?”
For those of us who don’t feel comfortable, the leading reasons include:
“I don’t know what to say”
“I wouldn’t want to make it worse”
“I’m worried they might get angry”
“I’m not an expert”
“It’s none of my business”
R U OK? CEO Brendan Maher said the results highlight the need to further empower those who aren’t comfortable asking someone who may be struggling and give people a road-map to start what could be a life-changing conversation.
“We sought expert advice to develop a four step strategy to guide people through a sometimes difficult conversation.
“We understand most Australians know what R U OK? is about, but we want to ensure that if someone says “no, I’m not ok,” people know what to do next.
“While offering support won’t always relieve someone’s distress, it is a great place to start. When conversations are too big for you and I, encouraging someone to seek professional help can sometimes be the difference between a hopeful path or a tragic one,” Maher said.
Psychologist and R U OK? advisor Rachel Clements agrees that these barriers to asking are normal fears but can be remedied by familiarising yourself with R U OK?’s four steps.
“We know that some conversations can be really tough. But in reality, you don’t have to be an expert to start a conversation – asking shows someone you care about them and that can make a really positive difference in their life,” Rachel said.
The Conversation Convoy launches in the spiritual heart of Australia, Uluru on 1 August and will head to most major cities across the country, with a strong focus on regional towns with the assistance of Rural & Remote Mental Health.
At most of the events, the suicide prevention organisation will gift a Conversation Corner (bench seat) as a legacy item, to encourage future conversations within the community.
The Conversation Convoy finishes on R U OK?Day, 14 September in Cairns, Queensland, with ‘R U OK? Rocks Cairns’, a concert featuring some great Aussie talent and ambassadors such as Ben Lee and Travis Collins, to celebrate the end of their journey on R U OK?’s biggest day.
Head to www.ruok.org.au/conversation-convoy to track the journey or find a local event.
Nicole Warwick