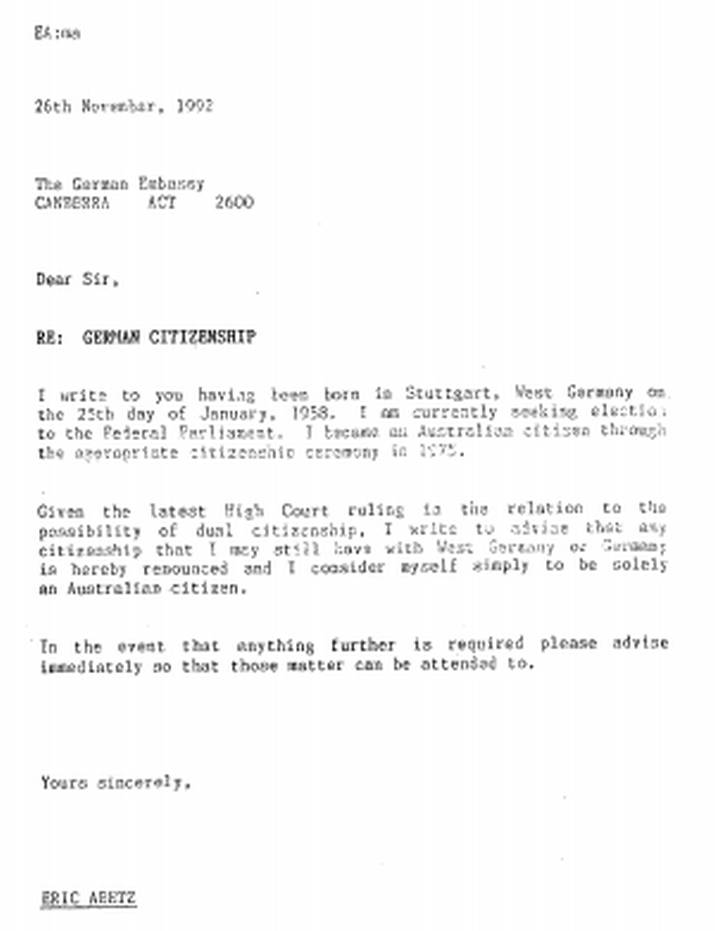 At the request of my legal team, Erich Abetz was forced to supply various documents to support my case before the High Court sitting as the Court of Disputed Returns.

In addition, and of his own volition two days before the hearing, Abetz produced a Verzictsurkunde Certificate dated 25 January 2010 and issued on 9 Mar 2010 showing that on that date Abetz received from the German Government its acceptance of the renunciation of his German Citizenship as he had requested.

“Erich Abetz has at the moment this certificate was issued lost German citizenship through renunciation”. (Download below)

This document is page 8 of the 9 pages translated by Leopold Cruis…..? The other 8 pages should contain the reasoning behind the issuing of the document and these must be submitted to Parliament as requested by Senator Peter Whish-Wilson.

An individual elector can only contest a person’s election before the High Court within a period of 30 days from the date of the ballot, and only for that specific election.

The production of his Renunciation Certificate forced me to withdraw my case because Abetz was no longer a German citizen from 10 March 2010, and was therefore eligible to hold a seat in the Australian Parliament for the term commencing July 2011.

As Abetz could not renounce a citizenship he did not have, he sat illegally in the Senate from 1994 until the end of his term in 2011 – unless he relied on other evidence.

Abetz relied on his so-called German Citizenship letter sent on 26th November 1992, a carbon copy of which Abetz was forced, under duress, to produce to the High Court.

I have never seen this document but I suggest that it was created by Abetz after his election to a casual vacancy in 1994 after his failure at the ballot box in 1993.

Why is this 1992 letter so odd that it causes me to make this statement?

Abetz is a University trained lawyer and barrister.

The document is dated the day after the Sykes v Cleary case, thereby giving a reason for its creation – if investigated by any person such as myself!

Yet in this important matter Abetz purports to have written a letter to an Embassy of a divided nation (Unified in 1990) giving no return street number or street address and expecting it to be delivered. (Download below)

The correct address and title of the Embassy is The Embassy of the Federal Republic of Germany, 119 Empire Circuit, Yarralumla, ACT 2600.

He gives an incorrect Christian name.

His name in the German Embassy files and on his birth certificate is Erich.

He does not attach any evidence of when or how he acquired Australian Citizenship.

He does not attach a copy of his certificate regarding his Affirmation or Oath of Allegiance to Australia. (Download below)

He does not return his German passport as kept when he was granted his certificate of Australian Citizenship on 5 Dec 1974. (Download below)

How could the Embassy reply if Abetz gives no sender’s address?

Had this letter actually been sent in November 1992, Abetz would have had 14 months to obtain a reply before his February 1994 election to a casual vacancy in the Senate.

The West German Government would have requested these documents to process his request and Abetz would have supplied them.

This is not evident.

The Germans, always ruthlessly efficient, would in a matter so important have certainly replied – particularly with the mention by Abetz of the High Court within the context of the letter.

No reply and no further correspondence suggest that this letter to the German Embassy is fraudulent by virtue of being created after the event in a seemingly slapdash attempt by Abetz to muddy the waters and cover his tracks.

I contend that Abetz sat knowingly and fraudulently in the Senate from 1994 until 2010 when I forced him to legally renounce his citizenship to the High Court.

He then sat on illegally until the end of his term in 2011 – and those in power colluded and did nothing.

As a lawyer Abetz knew that the 1992 document would not meet the foreshadowed test case in the High Court, and so he was forced to legally renounce his citizenship in 2010.

His big mistake was to state to Sue Neales that he had the evidence and would provide the 1992 document to the Mercury – but he never did.

This gave me the required insight as to its existence and enabled me to ask for its production before the High Court.

Subsequent to the hearing Abetz has always relied on his Citizenship documents of 1974 – with nary a mention of this suspect document.

It could be asked (a) why three Presidents of the Senate have consistently refused to act and (b) where has the Chief Law Officer the Attorney General been throughout this long and difficult saga?

The Senate is not a Club and it is certainly not peopled by Gentlemen.

I thank Senator Peter Whish-Wilson for asking those questions and I demand an answer of my elected representative, Senator Erich Abetz, to his peers in the Senate.

All the downloadable documents need to be tabled before the Senate by Senator Peter Whish-Wilson to allow for public debate on this important and possibly fraudulent matter, and if the Senate determines that Senator Erich Abetz sat illegally and fraudulently in their midst from 1994 until 2011 he should be forced to resign and be stripped of his entitlements – as suggested by the Attorney General, Senator Brandis, in the case of the two recently resigned Green Senators: Sky, HERE: Brandis unsympathetic towards Scott Ludlam