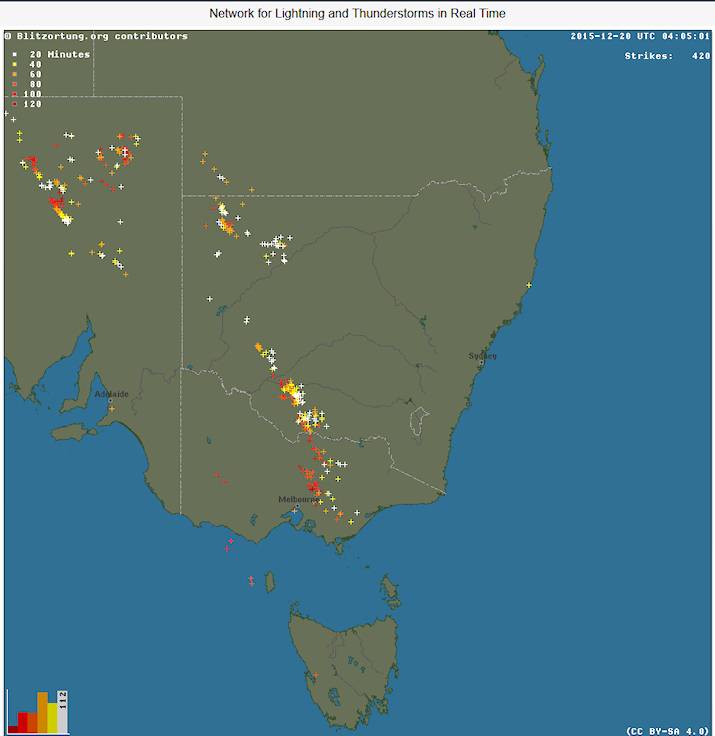 *Pic: Lighting and thunderstorms in real time … http://en.blitzortung.org/historical_maps.php?map=22 … where you can view still shots or video.

Pic: of the damaged cable from Basslink.

So if the government don’t accept that the damage to the Basslink cable was a force majeure, then what do they think caused the damage?

• Pat Synge in Comments: As far as I know the location of the Geelong Star when the cable was damaged has never been ascertained and now it has left Australian waters.

• Kelvin Jones in Comments: … Then there is still the question: where was the Geelong Star at the critical time of cable failure? No one has presented any proof that it could not have been the cause.

• Kelvin Jones in Comments: Lightning … Without going into transmission line theory Pete Godfrey is on the mark. A lightning bolt sufficiently powerful enough to overcome the spike protectors entering the cable would blow the insulation along the cable length. This will continue until the voltage in the spike was attenuated by arching to earth through the shattered insulation. The rest of the energy pulse would continue down the cable until absorbed to earth by the cable capacitance. It would not, I repeat would not blow a hole from inside to out … In view of leaving port with newly and extensively modified nets it would no be unreasonable that Geelong Star set a course running south of Geelong to allow a quick return if net testing showed more land based modifications were needed. If this initial course was taken then not needing to return to port would put Geelong Star on a course to NSW waters that is highly likely to cross the cable at the damage point. If the net for some reason took an unexpected sudden dive whilst they crossed the cable we have a recipe for the damage to the cable.