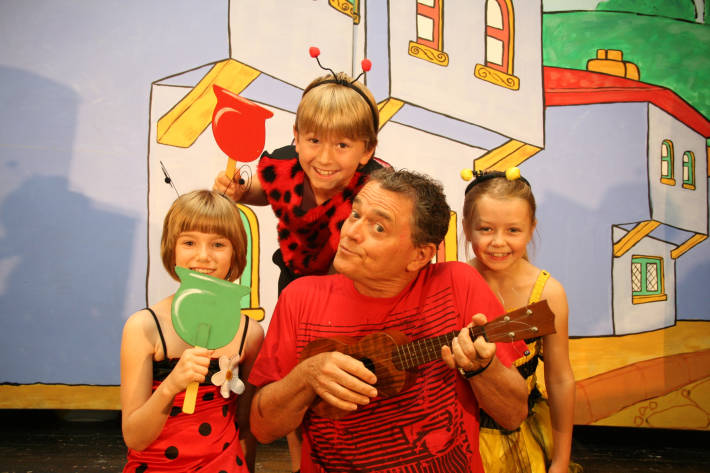 A boisterous bevy of family spectaculars will be on show during the Hobart Spiegeltent season,
from the 6-23 March 2014 at Princes Wharf No.1, including the much loved children’s entertainer
Peter Combe, Erth’s Dinosaur Zoo, The Listies and Monski Mouse.

Ten Days Executive Director and Producer Marcus Barker said the wide range of shows on offer
during Hobart’s Spiegeltent season catered to all ages, even the littlest ones.

“We understand how important it is for children to get involved with the arts at a young age,
which is why the Spiegeltent will host multiple performances designed for kids of all ages and for
those simply young at heart,” Mr Barker said.

“A favourite not just with the kids, but the whole family, is Peter Combe, who will even have
mum and dad singing along to his catchy tunes such as ‘wash your face in orange juice’ and
‘spaghetti bolognaise.’

“A professional children’s singer and songwriter for 30 years, the kids will be able to enjoy songs
that will become cherished childhood memories – just as Peter’s songs are for many older
generations.”

Mr Barker said in addition to Peter Combe there would be an array of children’s performances to
appeal to every taste, including Monski Mouse’s Baby Disco Dance Hall, Erth’s Dinosaur Zoo and
The Listies.

“Monski Mouse will have the kids moving and grooving at her Baby Disco Dance Hall as well as
laughing in delight as she plays their favourite nursery rhymes in a groovy, upbeat style,” he said.

“Even those not yet walking can enjoy Monski Mouse’s performance, with a soft furnished baby
area for them to roll around to the beat. It’s certainly an event that the whole family can enjoy
together and most suitable for children up to five years of age.

“Taking audiences into a new dimension of theatre, the little ones will be shrieking with delight
mixed with fear as they marvel at the baby dinosaurs and larger prehistoric creatures at Erth’s
Dinosaur Zoo.

“Erth’s Dinosaur Zoo is an interactive educational performance unlike anything else. The kids will
be mesmerised by the largest carnivores to have ever walked the earth as well as the menagerie
of insects and mammals on show. This show is for ages five to five hundred – so don’t be a fossil!

Presented by Ten Days in association with Strut & Fret

“Expect the unexpected with the award winning children’s comedians, The Listies, and prepare
to laugh until you can laugh no more.

“You can expect alien attacks, toilet paper guns, singing bananas and the world’s funniest joke,
which The Listies have performed to families across the globe. The Listies Earworms show is
suitable for aged four and over.”

For a copy of the Spiegeltent program or to purchase tickets, simply head to tendays.org.au,
phone 6210 5777 or visit the new Ten Days office located at 71 Murray Street, Hobart.
Ten Days on the Island