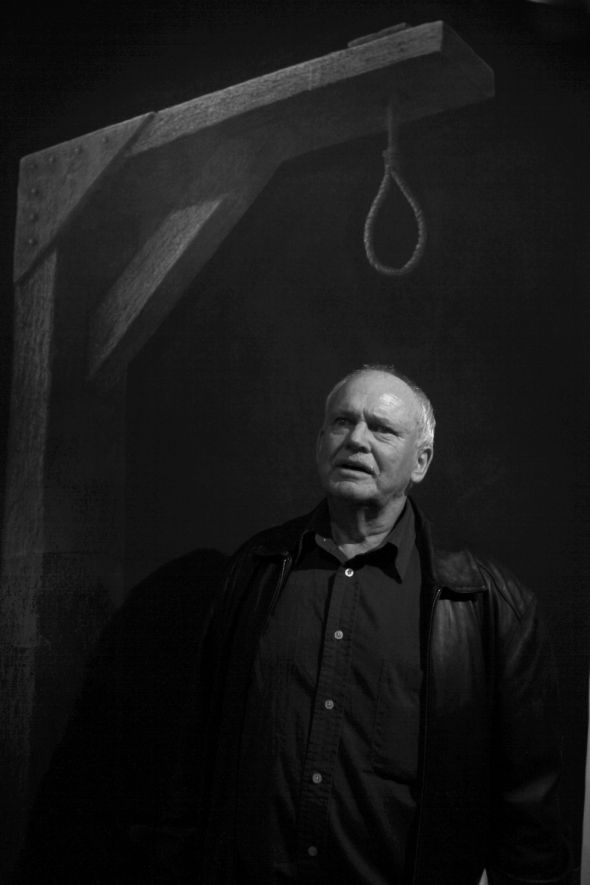 Photo: Peter Lord … of Pete Hay at the Burnie launch

Please indulge me if I start with a personal note. The Burnie pulp mill played a big part in my early life. Not only did I and other members of my family and many of my friends work there, but having spent a large part of my childhood and adolescence in or near Burnie, I had always felt it as a huge and unavoidable presence in my life. And I don’t just mean the sulphurous stench when the Easterly blew.

Although, as one could guess from the title, Last Days of the Mill< looks backward, it doesn’t, in most cases, look back as far as the days when I used to work through the shut and beyond in the Papermakers stores every summer. In those days there were people who had retired from working continuously at the mill since they’d left school. There was no less sense of the mill being a permanent fixture than there was of the same being true for Round Hill or the ferns of Fernglade. I remember a strike in the late ’50s, the first industrial dispute I had ever been conscious of up close, and I remember the sense of solidarity that pervaded the town. Even my father, headmaster of the local school, member of the Rotary Club, and so conservative in his politics that he voted for both Menzies and Eric Reece, was sympathetic to the strikers. That strike, of course, was very minor compared to ’92, and it is interesting how the reminiscences which underpin the poems in this book tend very much to revolve around the ’92 strike.

There were rorts, of course, as there are in all large enterprises. Some of these are delightfully recalled in the book. There was the occasional order from the stores for a sheet of Sarnprene greasing foam cut to a single mattress size and shape for someone who’d got a job as a greaser but needed to get in his eight hours’ sleep because he had another job elsewhere. There were plenty of humorous characters and a great sense of camaraderie. There was the girl from the finishing room I used to sit with at lunchtime, but that’s another story.

If you’ll allow me one more indulgence, I’ll read a poem I wrote recently.

My passport’s navy blue with gold insignia
like the guernseys of the APPM football team
when I watched Yolla lose to them in 1949:
my oldest memory of defeat.

Associated Pulp and Paper Manufacturers,
“The Pulp” was all we ever called it.
It was where you worked if you didn’t have a farm
(or if, like my uncle’s, sick cows couldn’t pay bills.)

The Pulp was sold many times; high finance,
higher than the trees that fed it, higher
than the marks the Pulp’s full forward took
over stolid cow cockies, flew like leather

backwards and forwards above the lives
of drivers, fitters, finishing room girls,
settling finally somewhere in Taiwan
or Switzerland. Who knew? The farms

long since turned to Eucalyptus nitens
bred to suck the life out of the country,
sicker than Uncle Lyle’s crook herd
of Friesians, just as useless, but lined up straighter.

I remember lines of washing. There was a woman
down the road who hung out rows
of APPM guernseys every Monday,
like passports in the bright, cold wind.

But that’s enough of me. The really important people are Pete and Tony – and, of course, the Pulp workers whose lives are presented in the book so aptly and so memorably through the poems and the drawings and prints. I’d like to point out that, as far as I know, Tony is no relation. There are two Thorne clans on the island, and he must belong to the other one. He has captured the atmosphere of the mill as I remember it, the massive scale of the machinery compared to the humans working with it. The sense of oppression that this evokes is actually heightened by the vast empty spaces at the end, as the last few workers are dwarfed by the void that has finally come to replace the activity, the vitality, the sheer humanity that is the history of the Pulp. Looking at Tony’s work you can’t help but get a gut feeling of apprehension about the way that people are becoming surplus to the requirements of the contemporary economic and industrial system.

And what has happened historically as a consequence of that is interesting to contemplate. Tasmania, of course, features prominently in one of the most significant of such occasions, when the Industrial Revolution destroyed the commercial value of so many people in Britain. The abolition of slavery in the USA made millions of African-Americans similarly redundant. Misery, poverty, lack of freedom, forced migration: these were some of the side effects. But so were cultural flourishings, remarkable stories of survival, improvisation and co-operation, of the irrepressible nature of the human spirit. The closure of the Pulp was not on that scale, but it was one small part of a world-wide phenomenon which is currently altering the way humans interact on and with this planet as old structures collapse.

As for Pete Hay… I read in a magazine recently where he was described as a “latter-day Steele Rudd”. Well, at least it wasn’t Kevin. Rudd’s Dad and Dave inhabited a different environment, physically and socially, from the Pulp workers of Burnie, but that comparison got me thinking that the voices in Pete’s poems in this collection are still, to a significant extent, rural voices. Even though Burnie was officially declared a city half a century or so ago, the Pulp was never an urban factory complex and its workers never fitted the mould of the traditional urban proletariat.

So the voices that Pete has captured so accurately here are distinguishable from the voices of anyone else in the world. The suburbs of Montello and Brooklyn, where many of these people lived, are unlike, say, George Town or Goodwood, places which might have a superficial similarity to them. Just seeing the name of Jorgensen Street attached to one of the poems took me back to sights, sounds, friends, a whole environment that was a deeply embedded part of my teenage life. But here I am talking about myself again. A number of the people in the book, in fact, live out of Burnie itself. Yolla, Somerset, Sulphur Creek: These are still as much country villages as they are outer suburbs, and the characters who speak to us from these places, courtesy of Pete’s work, are links to a wider network of human interaction. Tasmania is a tightly woven mesh of relationships, interests and experiences. This book draws out a few strands of that mesh and highlights them.

If you have any interest at all in the structure of that mesh, or if you want to see how excellent works of art, either visual or aural (for Pete Hay’s poetry is always primarily aural) can be created from the working lives of so-called ordinary people, or if you just want to read some great poems and look at some great pen-and-wash drawings or digital prints, then you have to get a copy of Last Days of the Mill. I have the greatest of pleasure in launching it.