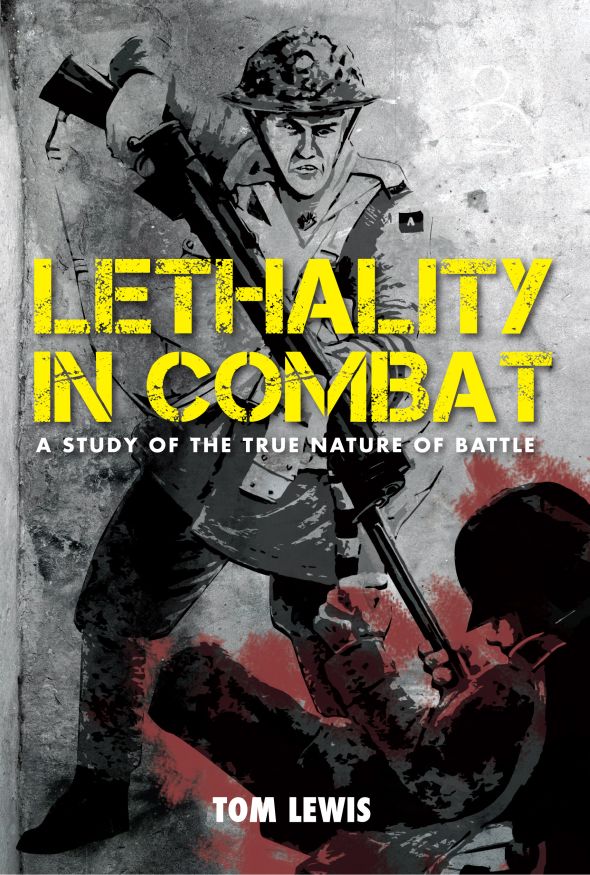 Controversial new book by author Tom Lewis shatters our preconceptions on the realities of combat.

“One Italian paid the price for not observing the rules of surrender. He bobbed up from one of the pits, put a rifle to his shoulder and shot Green through the chest. He dropped his rifle, put up his hands and climbed out, smiling broadly. An angry Australian emptied his Bren gun into him.”

Lethality in Combat, A Study of the True Nature of Battle by Tom Lewis shines a blazing light on the three most controversial aspects of military combat: the necessity of killing; the taking, or not, of prisoners; and the targeting of civilians. This book argues that when a nation-state sends its soldiers to fight, the state must accept the full implications of this, uncomfortable as they may be. Drawing on seven conflicts – the Boer War, World Wars I and II, and the wars in Korea, Vietnam, the Falklands and Iraq – the author considers these ethical issues. Lethality in Combat lifts the veil on the much-misunderstood but very real and secret world of unsanitised war.

Attached is cover art and media release – with the introduction from Lethality in Combat.
Tom Lewis is available for interview. See Author Q&A’s in this email.
Review copies available.

Synopsis
Lethality in Combat sets out to illustrate the truth of combat, to destroy several myths on lethality in combat and understand the true nature of lethal behaviour in war. To counter an attitude that lethal behaviour in
battle is somehow wrong. Author Tom Lewis believes the our soldiers realise that the uninitiated may find their actions difficult to understand, perhaps condemning them, so truth becomes sanitised and reality becomes a version of the truth. Modern society, without understanding the sort of constraints and demands placed upon the soldiers, places its instant and widespread judgement of warfare upon the soldiers who are, for most part, simply doing their job

As Lewis notes ‘The whole point of warfare is to be lethal, for only by being enthusiastic about their task can those placed in that actual moment of combat… survive.’

Author FAQ
Q. Do you think you’ll get much denial of your conclusions from veterans?
A. Some will of course… people change their minds, or disagree with you because that’s not their experience. But I studied hundreds of sources for this book. I’ll stand by its findings.

Q. Why might soldiers lie about what they’ve experienced – to their loved ones?
A. Why not? It gets you condemned. I cite a soldier who unfortunately wrote to his mother after his first engagement in WWII, saying he had shot a German, and he felt terrific, and he was congratulated by his sergeant. She of course wrote back horrified. And so he didn’t write that sort of story home any more…

Q. It seems from what you’ve written that there is a dichotomy in promoting – literally but also praising – the warrior in times of conflict, but then afterwards revulsion in what they do. How does society cope?
A. I think society copes by being honest about what it’s asking its military personnel to engage in – and not being hypocritical about it. Bomber Harris in the defence of Britain was praised by millions – and years after the war reviled by a few. But how many of the millions came forward in his defence. Albert Jacka was an Australian hero in WWI, and now there is a suburb in Canberra named after him. But I have heard people who know his story say that shouldn’t be so.

Q. Why would people enjoy reading your book?
A. They may well not enjoy it! But they will find it shatters their previous perceptions, and it will help them understand the realities of combat.
Sharon Evans Marketing & Communications www.bigskypublishing.com.au