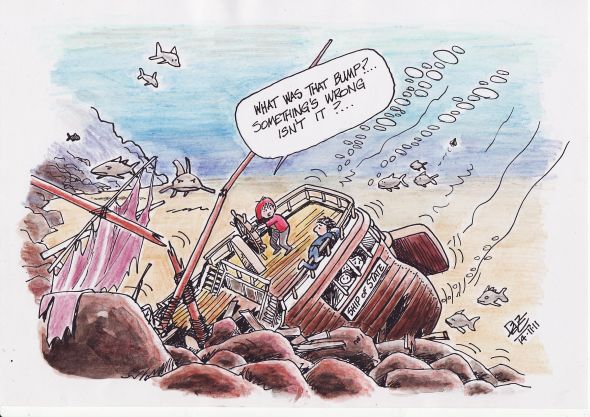 *John Lawrence’s verdict on the State of the State

What if the Premier is correct in her repeated claims that we have no money? Given that the premier is not known for telling the whole truth, perhaps the situation is worse than she says?

Will the cuts proposed in the last Budget but only now seeing the light of day restore the Budget to a sustainable basis?

The Premier, in the past, has referred to the shock of discovering the lack of hay in the barn when she assumed the top job. Let’s call it by its real name … cash. There is very little cash in the General Government’s coffers and something needed to be done. Will the proposed changes fix this?

If one looks at the cash surplus/deficit of the General Government, actual or estimated as the case may be, for each year since 2006/07 right through to 2014/15 there is only one year where there was/is sufficient cash to pay the current employer cost of defined benefit superannuation if payment in the current year had been required.

This appears to be prima facie evidence that there is a serious structural flaw with the General Government sector. It didn’t simply arise with the GFC, it has probably been there since 2006.

It also tends to provide confirmation of the fact as Saul Eslake often points out … that it costs more to deliver the same service in Tasmania as it does in the rest of Australia.

The Premier implies that the Budget cuts will fix things. Even if budgeted cost savings are achieved, the Budget won’t be sustainable. The Premier needs to be a little more forthcoming.

Robbing Peter to pay Paul may have been an acceptable Plan A, but only if there was a Plan B should things go awry. And that’s what has happened, virtually all the cash has gone and the unfunded superannuation liability is still growing. It hasn’t been one of the Government’s crowning achievements.

It also seems that major decisions can be made, without the true costs being brought to the decision-making table. The effects of salary increases on unfunded superannuation liabilities are often many times greater than the actual salary increases.

Maybe the Government has already decided to give up on setting aside funds to cover the unfunded superannuation liability but haven’t got around to telling us. The head of Treasury said at this year’s Estimates that “concepts like eliminating the unfunded liability by a certain time are not particularly helpful. They might be useful accounting concepts but they are not very helpful in a budget management sense because, for example, if you were to eliminate it by say, 2020, then for the next 40 years people pay nothing. Effectively that would mean that all of the cost is met by the people in the next few years rather than over the 50 years.”

Why should people in 50 years’ time pay for amounts that were spent by a Premier striving to win an election in 2010? Only if amounts were spent on items benefiting future generations can the inter-generational equity argument be invoked. All defined benefit members will be in benefit stage by the early 2030’s and for the next 30 years thereafter the Budget will have to fund those benefits. Benefit payments are currently 3% to 4% of cash outlays and will probably peak at roughly twice that %.

The head of Treasury may find the concept of eliminating the unfunded liability by a certain time as not being particularly helpful, but having no plan is worse. We await his deliberations.

Meanwhile we continue to live in a state of delusion. Spread the payments over as long as period as possible because it hurts less that way.

However each year that passes sees defined benefit employees leaving the workforce and replaced by defined contribution members whose superannuation payments will need to be made on a monthly basis, thereby exacerbating cash flow problems, made even worse now the SGL is being lifted from 9% to 12%. Increases in SGL don’t affect defined benefit members as their benefits are determined by fund rules not by the law of the land.

The Premier is correct about the Liberals’ alternative Budget. It is an exercise in pathetic populism. If one takes the numbers from their my-bottom-line-is-better-than-your-bottom-line Budget, the implied cash flow statements and balance sheets for each year of the forward estimates suggest the same level of unsustainability as the Government’s Budget, yet Messrs Hodgman and Rockcliff are fronting public meetings claiming to be the new Messiahs.

It must be remembered that the size of the State as recorded in its financials places it at about the same size as number 19, AMP, on the ASX Top 100 list so it is not unreasonable to expect a slightly higher level of understanding of problems than has been publicly displayed.

The Greens’ Treasury spokesman is recorded in Hansard as being “pleased to see that there are no major shocks for me in the Treasurer’s annual financial report”. This either confirms that a public education process is urgently required to discuss the State’s woes or that Tim needs to check the label to see if he’s taking his correct daily dose. It was pleasing at least to hear Mr McKim raise the possibility of higher taxes. If we have a similarity to Greece, it is our reluctance to pay State taxes. In my experience it is customary for businesses facing cash flow challenges to look at the revenue side as well as the cost side. All those demanding a solution to the State’s problems need to bear this in mind. Many who scream loudest pay an inequitably low level towards the cause they promote.

Any discussion needs to cover the State’s debt. The General Government’s borrowings are reasonably small, only a couple of hundred million owed to the Feds for public housing. But to constantly harp on about how the unfunded superannuation liability is not a debt is not particularly helpful. At least the Budget measures of the debt and liability reduction strategy emphasise the greater importance of the measure of Net Financial Liabilities which includes the unfunded superannuation liability rather than the narrow concept of Net Debt in the General Government sector, the absence of which is something the Premier crows on about all the time.

The three state owned electricity entities are all loaded to the gunwales with debt. But they have much better cash flows than the General Government sector and that’s why they’ve been singled out to carry the burden of borrowings.

Forestry Tasmania also is carrying a bit of debt, exactly how much is not quite clear as a hull inspection at this stage would require scuba equipment.

However it is not so much the costs of servicing this debt that has weighed us down, although we don’t need any more debt, it’s more a matter of the flawed structure of the General Government sector has been allowed to continue for so long.

There will be little argument from me on the question as to whether a lot of the things mentioned on placards and banners are areas where woeful public policy decisions have been made. It’s delusionary to think however that reversal of those decisions will alone solve our problems.

The cash effects on future budgets would be negligible. Things are much more serious.

Public servants and politicians are not, as a rule, overpaid. If they drive flash cars at Government expense, they’re probably salary packaged vehicles. The politics of envy rarely promotes useful debate. The lack of understanding of the issues and the willingness to grasp at peripheral straws in an attempt to find solutions, are not assisting.

The debate needs to recognise that we are deeper in the mire than the Premier has so far indicated. The Government has been slow in acting, it has been even slower in keeping all parties informed, most of whom at this stage are a little too detached from the reality of our financial situation to make a reasonable solution to our problems likely in the short term.

It’s going to be like the drawn out Euro zone crisis… one step forward followed by two steps back. It will be a tough 2012.