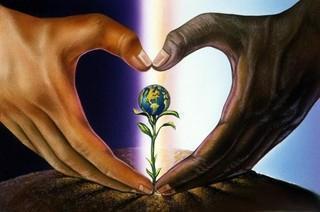 A study has warned that high food prices lead to riots (story below), that a situation could arise within years, even a couple of years, where rising food prices lead to global chaos. Such chaos could slide into wars, that in a nuclear armed world could slide into nuclear madness, where nations panic when leaders are faced with impossible decisions.

With peak oil upon us, food crops have been turned into fuel and this is driving up food prices, forcing more people around the world into starvation. This is happening in a background of an unsustainable demand on this planet by humanity that is draining life from Nature.

This nightmare future, ever so near, ever so real after the recent riots in London, could have been entirely avoided, if humanity had responded to the call for space development in the 1970s, when Gerard K. O’Neill put his vision on the table to build solar power stations in space, launch space industry and construct space settlements. Humanity could have begun to make the transition from an Earth-based house-of-cards carbon economy to a civilization in the Solar System with a strong economic foundation that would last as long as the Sun shines.

Now we face the price of our inaction on expansion beyond Earth and allowing a situation to develop where far too much is expected of one small planet.

Do we have time to act?

If a large enough number of people on Earth awoke to a vision for space and began demanding action and also worked toward this happening, hope would be generated that inspired action, where instead of riots, we may see that energy mobilised toward a better future on Earth and among the stars. If humanity is to have a future, it is time for empowered individuals to awaken and begin demanding action on the building of our survival insurance policy beyond Earth, so that we may be in a position to also survive on Earth.

Hope is the key to buying time to act.

The waves of social unrest and political instability seen recently around the world have coincided with large peaks in global food prices, US researchers have found.

They warn that unless something is done urgently to address rising food prices, it could trigger more widespread trouble in the near future.

Professor Yaneer Bar-Yam, president of the New England Complex Systems Institute , and colleagues, correlated the dates of riots around the world with data from the United Nations that plots changes in the price of food.

They found evidence that episodes of social unrest in North Africa and the Middle East coincided closely with peaks in the UN Food and Agriculture Organization’s Food Price Index.

Reporting their findings on the pre-press website arXiv.orgthe researchers say that although the riots reflect many factors such as the long-standing political failings of governments, high food prices provide a tipping point.

“There are indeed many factors that can contribute to unrest,” Bar-Yam explains. “What we see, however, is that these conditions can persist for many years without causing this level of protest, rebellion and revolution …. Then food prices go up to a certain level and social order falls apart.”

Specifically, the researchers found strong statistical evidence that social unrest and rioting occurred when the Food Price Index hit sharp peaks above a figure of 210.

On 13 December last year, the researchers say, they wrote to the US government pointing out the link between global food prices and unrest. Four days later, Mohamed Bouazizi set himself on fire in Tunisia in protest at government policies, an event that catalysed social unrest throughout the Middle East.

Reaching a threshold
Although Bar-Yam and colleagues correlated outbreaks of unrest with food price peaks, they also warn that the underlying price trend is increasing so quickly that it will soon breach a threshold.

According to the UN’s Food and Agriculture Organisation, the Food Price Index has been above 210 since February this year.

This is a worrying situation, says Bar-Yam. “The problem is that every society in the world has poor and disaffected populations. Social disorder is contagious. The more we see it happening elsewhere the more it becomes imaginable where one lives.”

“As we saw in London recently, even relatively affluent people … who do not have to worry about having enough food, can get caught up in conditions of social disorder and exploit them for remarkably small benefits.”

“What we see therefore is a rising force of food prices driving a general collective transition to disorder around the world.”

Deregulation, biofuel driving prices
The researchers point to two main factors driving the increase in food prices. The first is the deregulation of commodity markets, especially in the United States, United Kingdom and Japan, which allows prices to fluctuate widely. The second is the use of corn to produce ethanol for biofuel.

Unless these two factors are addressed, the researchers see an ominous future that they estimate could arrive within the next couple of years.

“This scenario we see unfolding is very much the scenario that people have been warning about as a global societal collapse,” says Bar-Yam. “The immediate scenario we see is driven by specific local decisions: corn to ethanol conversion and commodity market deregulation. These decisions, which could be reversed if policy makers change their positions, turn out to be the critical ones.”

He says the question is whether the world will be able to respond effectively to the precursors of widespread social disorder.

“How far down the road we will have to go until the warnings are being heard? The further things go, the more difficult it will be to change direction and the more damage will be done in the meantime.”