The government appears to have brought forward its decision on the location of the Northern Regional Prison. How else can you explain the fact that the site announced by Corrections Minister Elise Archer on Thursday was not mentioned even once in the Social and Economic Impact Study (SEIS) released at the same time?

That study was all about the government’s ‘preferred’ site in the industrial zone close to town, not the Brushy Rivulet site further out of town along Birralee Road that was anointed by Archer.

Through gritted teeth, “To be clear, the government will not be pursuing the previous preferred site,” Archer declared.

Yet it’s this site whose suitability has been analysed, costed – sort of…a full cost benefit analysis has not been done – and inquired about through the mail and phone surveys that were part of the ‘consultation process’ (more on those later). 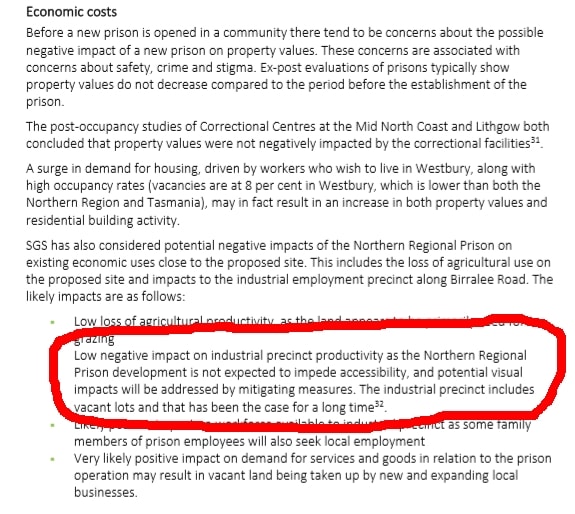 It can be seen in more focus here. This section of the SEIS on the economic costs of the prison talk about the ‘preferred site’, not the one announced.

“Low negative impact on industrial precinct productivity as the Northern Regional Prison development is not expected to impede accessibility, and potential visual impacts will be addressed by mitigating measures. The industrial precinct includes vacant lots and that has been the case for a long time.” – p.31, SEIS

Further along the SEIS, we see that there was a process of seeking “feedback on behalf of the Department from key stakeholders within the industrial business precinct to understand the social and economic impacts of the proposed prison.” (our emphasis)

Regarding the announced site of Brushy Rivulet and its environs, neighbours, visual impacts and so on … not a word.

Roughly, the rest of the SEIS can be considered as three parts.

One part is an economic impact assessment of the prison project. Largely this is untroubled by location, as the associated jobs and financial benefits would be present regardless of where a second major Tasmanian prison was located, as long as it was in the north.

There’s also an absence of any consideration of the economic benefits of looking at alternate approaches that may reduce the number of people in the prison system and hence obviate the need for a second prison. It may be beyond the scope of what SGS consultants were tasked to do in the SEIS, but it is not an irrelevant topic.

If infant mortality were rising in Tasmania, would we want to spend money on efforts to reduce the rate or would we just be debating where to site a new factory to manufacture child-sized coffins?

Another part discusses the general suitability of the region and the town. A key feature here is simply that Westbury happens to be in a spot that is readily accessible from most of northern Tasmania, given that the concept of the prison is to relocate northerners from the southern Risdon Prison. There is, however, no analysis of any options other than Westbury that would meet key geographical and logistical needs. 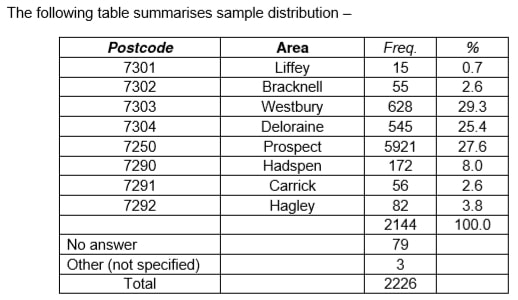 The other major part of the SEIS concerns their formal part of consultation, comprising a telephone survey and a postal survey. Outside this framework there was also a set of meetings by Archer and other Department of Justice officers with Westbury and Meander Valley residents, subject to varying views as their adequacy.

The postal survey received 2216 responses, barely a quarter of the 8581 that were sent out out. They were received from across the Meander Valley as shown in the accompanying table. Clearly the Prospect figure is incorrect…does no-one even bother to read and check the figures they compile?

Under the ‘Research Findings’ the following claim is made: “The total survey sample provides statistically robust outcomes in relation to the total target population with a sampling error range of between 0.8% to 1.8% at the 95% confidence level, ie. survey outcomes are likely to be within 1.8% of the actual parameter for the total target population – Meander Valley Council residents.”

The data however shows that in relation to age, only 207 surveys were received from people in the 18-39 age range, as compared to 630 from the 40-59 group and 1180 from the 60+ group (with 153 surveys not answering the age question). In other words, over five times as many surveys were received from the elderly age group as the young one. Keep that figure of five in mind for a moment. 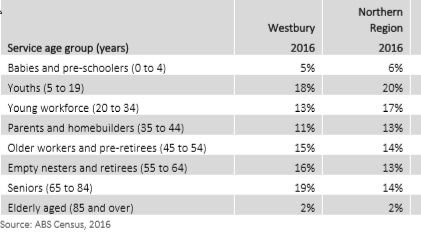 Earlier in the Study, Australian Bureau of Statistics data was cited regarding ages in Westbury and the Northern Region. The age categories don’t quite match up to the postal survey, but with a little rough reworking we can get there. Going on the Northern Region Figures, approximately 23% of residents are in the 20-39 group and 22% in the 60+ category. Approximately the same.

We therefore ask, how is a survey that is supposedly covering two groups of approximately equal size, yet returns five time as many from one of them, going to provide a fair picture of the views across the population? Anecdotally, it appears young people who grew up with predominantly electronic communication tend not to pay as much attention to ‘stuff in the mail’ as older people who were raised in a time when post was far more important. Nowhere does the SEIS even contemplate this.

Furthermore, the mailout is described in the methodology as follows: “addresses for mailout (approx. 8500) were supplied by Meander Valley Council from the current ratepayers roll.” Yet earlier in the SEIS, ABS figures are quoted that show 19% of Westbury residents are renters, 27% for the Northern Region. Renters do not pay rates and would not be on the roll, and hence were not included in the mail survey. Again, one questions the validity of the survey when it excludes approximately a fifth of the population from the consultation. 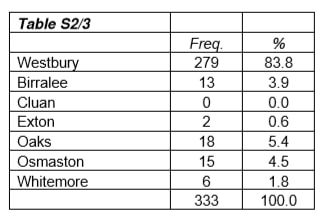 The telephone survey was also carried out by Myriad Research for the SEIS consultants, SGS. Among the explanation, there is no clarification about whether it was landline-only. Clearly, a landline-only survey would skew in favour of people sitting at home by the phone, and totally exclude those who rely entirely on mobiles. The last data that Tasmanian Times was able to locate, from 2017, showed that over 30% of Australian households no longer had landlines.

It was much more narrowly focused on Westbury. As this is the township closest to the prison site, it’s reasonable to expect that this more accurately reflects the views of those most likely to be directly-impacted by the prison project.

The results were tabulated as 39.1 in favour, 43.9 against and 17% undecided or neutral. Qualitative objections were grouped into categories such as too close to Westbury, a negative effect on the ambience of a historic town, likely to attract undesirables, stigma of being a prison town, potential negative effects on housing prices and so on.

The survey was described as a ‘push-poll’ at the time by action group Westbury Residents Against the Prison (WRAP). This was primarily because if a respondent offered a negative view of the prison project, they were then asked the following question: What could be done to address those issues/concerns? A whopping 117 of 196 responses to this were to move the prison.

As it turns out, the Minister has moved the prison … about 3 km further out Birralee Road.

“We don’t know why, but Birralee Road and its proximity to Westbury seems to hold a strange fascination for the government,” WRAP said.

They are claiming the government’s backdown on the preferred site closer to Westbury as a victory say that the battle isn’t over just yet.

“Make no mistake, we drove them off this site,” they said. “They did not leave voluntarily.”

WRAP say they are in the course of consulting extensively with their community to gauge sentiment about the new location. “When we have done so, we’ll be able to chart a path forward.”

They observe that new site will come at a significantly greater cost because it is further removed from essential infrastructure. “It was not in the mix in the government’s Expression of Interest process and seems like an odd decision to rush headlong into.”

According to WRAP the site was simply ‘happened upon’ by the Premier after chatting with locals in February.

“It’s far from an ideal procurement strategy. There is something quite bizarre about how this decision has been arrived at.

Regrettably, the government has yet again selected a site without consulting the community, so it feels a bit like groundhog day.”

WRAP have been roundly critical of Minister Archer, earlier this week producing documents which appeared to show the that industrial zone site had been chosen as early as the middle of last year.

Elise Archer had been steadfast that no final location had been chosen. Her media release of 5 March 2020 said:
“An expression of interest process calling for the nomination of potential sites for a northern prison closed in November 2018, and sites were considered, by an expert siting panel, for suitability against an extensive list of siting principles.
I will repeat it yet another time for Labor and Ms Butler – the preferred site outside of Westbury is only a preferred site. No final decision has been made about where the Northern Regional Prison will be located.
This preferred site is currently subject to an extensive consultation process which will determine if this is indeed the best location for this important facility.”

The conclusion of her ‘extensive consultation process’ has been, as announced yesterday, that the ‘preferred site’ is unsuitable. And yet, there has not been a word published by herself, the Department of Justice nor in the released SEIS report as to why the now-selected Brushy Rivulet site is suitable.

Tasmanian Times suggests that Elise Archer should reflect whether she has been an honest broker in this process, whether she has the competency to manage the scale of this undertaking, whether she has provided adequate direction of the project, and ultimately whether her position as Minister for Corrections is tenable.

Rushing the project so it can ride on a coronavirus-recovery wave of grandiose infrastructure gestures, without adequate scrutiny. just will not cut it.

The Brushy Rivulet location. The not-much-there adequately reflects the amount of government assessment of the site.