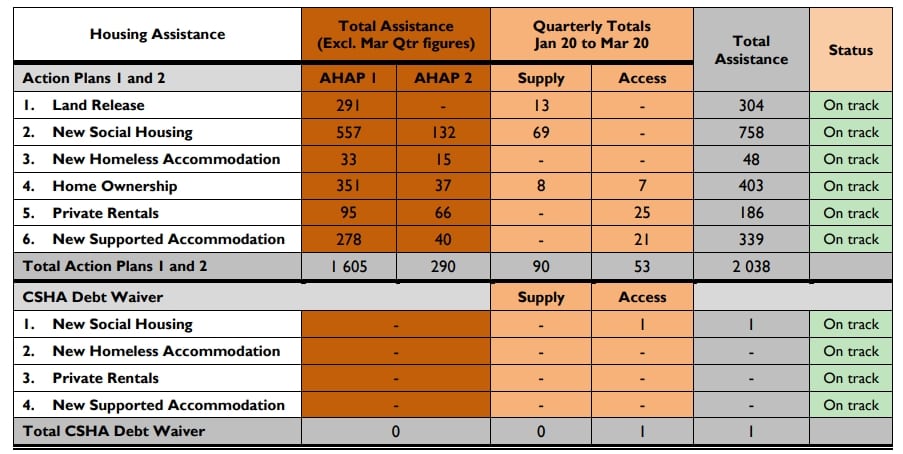 Delivering our commitment for more social and affordable housing

The March Quarterly Housing Report confirms the Tasmanian Government is delivering on our commitment to increase the supply of social and affordable housing in Tasmania.

The report shows the Government built 69 social housing dwellings in the March quarter, taking the total number of social houses built for Tasmanians in need to more than 400 over 12 months.

The report also shows that over the March quarter:

Our road map for economic and social recovery will include the most aggressive construction program in Tasmania’s history, with work underway to identify affordable housing projects that can be brought forward or commenced swiftly right across the State.

Importantly, there are currently around 250 homes under construction and Community Housing Grants worth $34 million expected to deliver 300 new homes over the next few years.

We are also continuing to deliver a significant number of projects to help Tasmanians in need, with work progressing on transitioning the Waratah Hotel into a 24 unit supported accommodation facility.

These works are being done by local firm Fairbrother, supporting local jobs when they are needed most and we expect the facility will be up and running by the end of the year.

We will continue to deliver our plan for more affordable housing in Tasmania as it will boost our economy, create more jobs for Tasmanians, and help more people into safe and secure accommodation.

The report can be found here: https://www.communities.tas.gov.au/housing/tasmanian_affordable_housing_strategy/reporting

The Gutwein Government is making some inroads in to the critical housing supply shortage but progress remains too slow.

Housing Tasmania’s March Quarterly Report shows the rate of increasing housing supply remains at about half the rate it was under the Labor-Green government.

From 2014 through to 2023 the Report projects the Liberals will have built 2400 new homes. In comparison to the Liberals’ record, during the four years of the Labor-Green government we delivered 2200 new, affordable and energy efficient homes. That’s what happens when governments prioritise critical social infrastructure over roads and corporate handouts.

Building an additional 2,000 new, affordable energy effiicient homes on top of the existing projections is a win, win win. More affordable homes for Tasmanians who need them, secure jobs in building and construction, and a kickstart to an economy gut-punched by the virus.

A housing led recovery is the clear, sensible path forward for stimulus spending. It will also shape a better, fairer future for Tasmania.

During and after coronavirus, we have to make sure no one is left behind.

“Not only that, but that issue fell largely outside the reporting period of January to March 2020.

“But when it comes to reporting on real action, there was apparently very little of substance to say, and what there was wasn’t good news.

“There’s been a 20 per cent drop in new social housing dwellings constructed during this quarter – down from 87 to 69 – even though we know there is unprecedented demand for social and affordable housing.

There was no new homeless accommodation provided this quarter, underlining the ongoing delays in providing shelter for those most in need as we head into winter in the midst of the pandemic.

“The people experiencing homelessness in regional Tasmania and those couch surfing or living in overcrowded premises again get nothing.

“On top of this, the additional $34 million investment in social housing due to the Commonwealth debt waiver last September delivered access to just one new social housing home by the end of March.

“The Liberals may say their target of supporting 400 additional households into housing by 30 June 2023 is on track, but the evidence here tells us otherwise.

The Housing Minister has been given a blueprint to address the housing crisis, in the form of the 61 recommendations in of the House of Assembly Select Committee on Housing Affordability.

“We are heading into what will no doubt be a difficult winter for many people without access to adequate housing.

“There have been too many winters like this for too many Tasmanians. The time for talk is over. This government must actually get on with it and do something tangible for those in real need.”