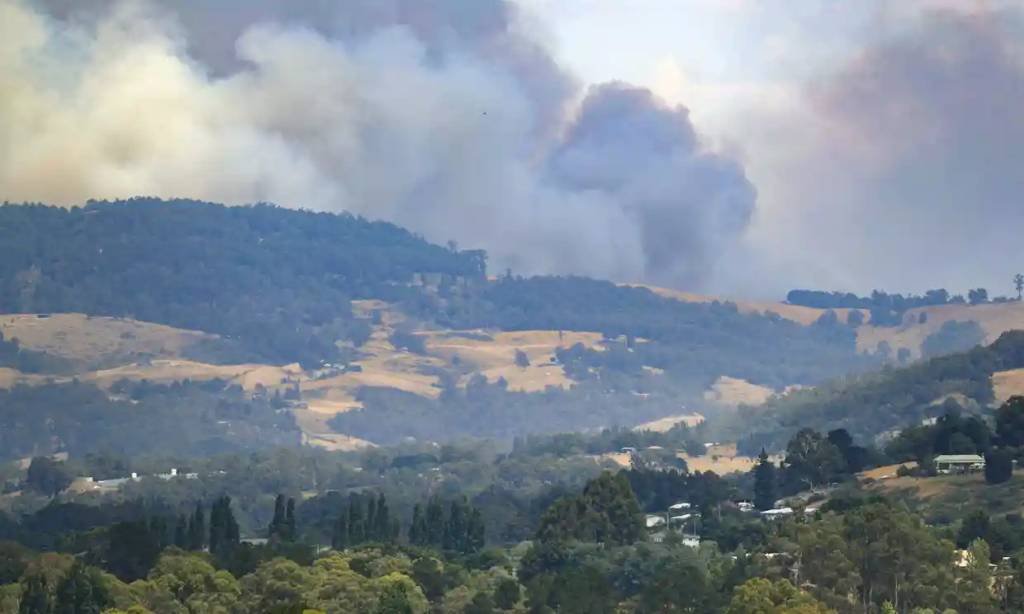 FIRST published in The Guardian HERE

As I write this, fire is 500 metres from the largest King Billy pine forest in the world on Mt Bobs, an ancient forest that dates back to the last Ice Age and has trees over 1,000 years old.

Fire has broached the boundaries of Mt Field national park with its glorious alpine vegetation, unlike anything on the planet. Fire laps at the edges of Federation Peak, Australia’s grandest mountain, and around the base of Mt Anne with its exquisite rainforest and alpine gardens.

Fire laps at the border of the Walls of Jerusalem national park with its labyrinthine landscapes of tarns and iconic stands of ancient pencil pine and its beautiful alpine landscape, ecosystems described by their most eminent scholar, the ecologist Prof Jamie Kirkpatrick, as “like the vision of a Japanese garden made more complex, and developed in paradise, in amongst this gothic scenery”.

“You have plants that look like rocks – green rocks – and these plants have different colours in complicated mosaics: red-green, blue-green, yellow-green, all together. It’s an overwhelming sensual experience really.”

Five years ago I was contacted by a stranger, Prof Peter Davies, an eminent water scientist. He wanted to meet because he had news he thought would interest me. The night we met Davies told me that the south-west of Tasmania – the island’s vast, uninhabited and globally unique wildland, the heart of its world heritage area – was dying. The iconic habitats of rainforest, button grass plains, and heathlands had begun to vanish because of climate change.

I was shocked. I had understood that climate change’s effects on Tasmania would be significant but not disastrous; the changes mitigated by Tasmania being surrounded by seas that were not heating as quickly as others: the island’s west would get wetter, the east a little warmer and drier, but compared to much of the world it didn’t seem catastrophic.

But it wasn’t so. Tasmania’s sea waters were warming at two to three times the global rate. Davies’ work, with that of other scientists, was revealing the warming and drying of Tasmania’s west and highlands, and the growing impact this was having. The highland lakes of Tasmania would, for example, in the next 70 to 100 years see between a 10% and 20% drop in rainfall, coupled to a 20% to 30% increase in evaporation. By the end of this century a significant proportion of these lakes and wetlands will cease to exist or be largely dried out much of the year.

Then there was the startlingly new phenomenon of widespread dry lightning storms. Almost unknown in Tasmania until this century they had increased exponentially since 2000, leading to a greatly increased rate of fire in a rapidly drying south-west. Compounding all this, winds were also growing in duration, further drying the environment and fuelling the fires’ spread and ferocity.

Such a future would see these fires destroy Tasmania’s globally unique rainforests and mesmerising alpine heathlands. Unlike mainland eucalyptus forest these ecosystems do not regenerate after fire: they would vanish forever. Tasmania’s world heritage area was our Great Barrier Reef, and, like the Great Barrier Reef, it seemed doomed by climate change.

Later Davies took me on a research trip into a remote part of the south-west to show me the deeply upsetting sight of an area that was once peatland and forest and was now, after repeated burning, wet gravel. The news was hard to comprehend – the enemies of Tasmania’s wild lands had always had local addresses: the Hydro Electricity Commission, Gunns, various tourism ventures. They could be named and they could be fought, and, in some cases, beaten.

But the new danger was not here. It was in the sky, it was carbon, and every year there was more of it. The name of the crime was climate change.

Six weeks ago, the future that Davies and others had been predicting arrived in Tasmania. Lightning strikes ignited what would become known as the Gell River fire in the island’s south-west. In later weeks more lightning strikes led to more fires, every major one of which is still burning.

Tasmania subsequently recorded its driest January on record, with maximum temperatures an astonishing 3.22C above the long-term average for the month. Fuel loads were, according to the Tasmanian Fire Service, 20% to 30% drier than average. In such an unprecedented environment the fires were unstoppable.

Today Tasmania is burning. Its fires are so large that a firefighting team was reportedly called out in New Zealand to investigate a heavy smoke haze that turned out to have drifted across 2,500km of ocean from the Tasmanian fires. Firefighters are confronted with 1,629km of fire front, with fires having consumed 190,000 hectares, or 3% of Tasmania’s land, with authorities warning there is no sign of the fires abating for several weeks, and the potential for catastrophic consequences still a distinct possibility.

To date, Tasmania has had the extraordinary luck this summer to not have had the gale force winds that characterised the tragic 1967 fires, in which 62 people perished within a few hours. But luck is only that, and one day soon, this summer or next, or the one after, that fatal day will dawn, and the catastrophe that will result will dwarf all previous Tasmanian fires in its fatal tragedy because everything else has changed, and all for the worse.

The Tasmanian fires have attracted little national media attention because there has been as yet, thankfully, no loss of life and only a handful of homes burnt. And yet these fires signal a terrifying new reality, as disturbing and ultimately almost certainly as tragic as the coral reef bleaching of the Great Barrier Reef.

What has become clear is that another global treasure in the form of Tasmania’s ancient Gondwanaland remnant forest and its woodland alpine heathlands are at profound and immediate risk because of climate change. Heroic efforts have been made by remote area firefighters to preserve some of these rare ecosystems. But when communities in the Huon came under threat most of these resources were diverted to that front. Such resources don’t come cheap: a single drop by a Hercules C-130 water bomber is understood to cost $75,000.

And so, without a far greater investment of money in the coming years, scientists believe these global treasures are doomed to destruction. This week or next year or the next, the certainty is that without extraordinary effort, they will burn and be gone forever.

At the same time Tasmanians find themselves living in a frightening new world where summer is no longer a time of joy, but a period of smog-drenched dread that goes on week after week, and it seems inevitable, month after month. Whole communities have been evacuated and are living in evacuation centres or bunking down with friends and families. Those that remain live in a fug of sleeplessness and fear, never knowing when the next ember attack will occur or a nearby fire will break containment lines, a gut-clutching terror of wind, smoke and heat. Volunteer firefighters find themselves no longer fighting fires for a week but for a season. Government is confronted with the extraordinary cost of fighting fires of this size and scale for months.

This would seem to be the new normal. According to Prof David Bowman, professor of pyrogeography at the University of Tasmania, henceforth Tasmanians “must think about fire as part of daily life”.

Two years ago the then treasurer Scott Morrison picked up a large lump of coal. Perhaps he thought it was a great joke for Australia at the expense of a few weird outliers like the Greens and the global scientific community. Or perhaps Morrison wasn’t really thinking anything. Perhaps the greatest error of journalists is thinking people at the centre are more than they seem. The problem with people like Morrison, the true terror, is that they may be so much less.

Almost stuttering in his excitement, missing pronouns, he was gibbering without punctuation. If the style was grammatically Joycean, the effect, like his previous masterpiece, “Where the bloody hell are you?”, was memorable.

He waved the piece of coal around like it was the sacred Host itself, he swung it high and he brought it so low that for a moment it was as if a wildly guffawing Barnaby Joyce seated next to him might lick it. How they laughed! The ranks of the Liberal party assembled around and behind, how they all laughed and laughed that day.

Those faces contorted in weird mirth are the grotesque masks of a great and historic crime, deriding not just their political opponents but mocking the future with that pure contempt of power, daring us to remember beyond the next news cycle, to care beyond the next confected outrage, to see past the next lie. It is the image of our age: power laughing at us.

Scott Morrison’s proudest boast is that when the barbarians were at the gate, he stopped them. But now the truth is clear: the barbarians were never at the gate. They were always here, in the palace, in power, and they were blinding us with their lie that the enemies who would destroy our world were the wretched and powerless who sought asylum here. And all along our real enemy was them: those who held up lumps of coal in front of their throne, and laughed and laughed and gloated won’t hurt you won’t hurt you.

What has become clear over these last four weeks across this vast, beautiful land of Australia is that a way of life is on the edge of vanishing. Australian summers, once a time of innocent pleasure, now are to be feared, to be anticipated not with joy but with dread, a time of discomfort, distress and, for some, fear that lasts not a day or a night but weeks and months. Power grids collapse, dying rivers vomit huge fish kills, while in the north, in Townsville, there are unprecedented floods, and in the south heat so extreme it pushes at the very edge of liveability has become everyday.

And the future in which the people of Tasmania now find themselves, in the evacuation centres, camped in friends’ and family homes, fighting fires day after week after month, isn’t just frightening. It’s terrifying. While Morrison, now the prime minister, rushes around the country trying to scare the people about franking credits, he seems blithely unaware that the people are already scared – about climate change.

Climate change isn’t just happening. It’s happening far quicker than has been predicted. Each careful scientific prediction is rapidly overtaken by the horror of profound natural changes that seem to be accelerating, with old predictions routinely outdone by the worsening reality – hotter, colder, wetter, drier, windier, wilder, and ever more destructive.

When Scott Morrison visited Tasmania yesterday he wasn’t photographed holding a lump of coal up in Geeveston. In the evacuation centre at Huonville. In the sacred King Billy pine groves of Mt Bobs or the exquisite cushion plant gardens of the Walls of Jerusalem. I doubt he had the folly to tell people don’t be scared. I am sure that he looked concerned and perhaps occasionally he smiled, the smile of the weak man, the smile of all the empty men.

And tomorrow there will be another welcome photo opportunity at another unprecedented “natural” disaster, another fire, another flood.

And when he retires back into his prime ministerial limo I wonder if he laughs.

Laugh at us all, Scott Morrison, you and the others who sit with you, grinning fools at the entrance to hell. Laugh and laugh as the ash falls soft as silent despair.

Richard Flanagan, a writer, won the 2014 Man Booker Prize. He lives in Hobart and is one of the finest authors of his generation …