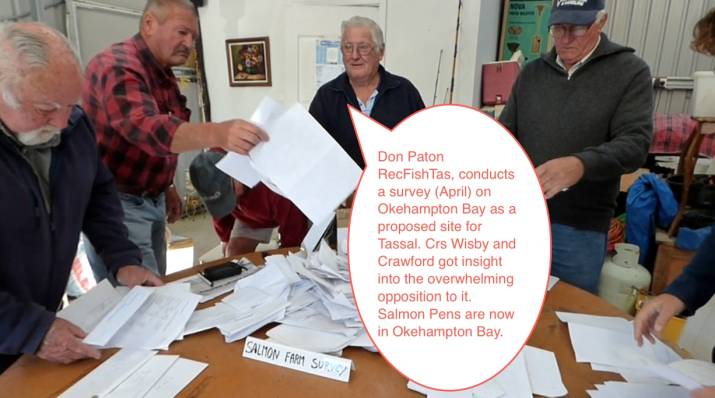 Two walkouts with perhaps one to go … a gob-smacked public gallery witnesses a volley of abuse hurled by some councillors at those fellow councillors who walked out. Such an abruption at an ordinary council meeting during questions without-notice suggests perhaps it is an extraordinary meeting … with far-reaching implications.

Nice little background tapestry for things to come. All in the shadow of the idyllic bayside setting of Glamorgan Spring Bay Council chambers at Triabunna.

And so what has happened to the unity of this friendly elected group looking after ratepayer interests from Buckland to Bicheno?

Residents are bemused by so much media coverage of the past few days and like that theme-song of the Disney Mickey Mouse Club nobody knows what’s gonna happen. All will be revealed, and hopefully resolved at the next meeting which must be called within two weeks … and that far-flung municipal outpost of Bicheno has much to do with it all.

I’ve written to the Tasmanian Times much before of the flamboyant, cycling former mayor Le Frog, Bicheno resident Bertrand Cadart, who mistook publicity for ratepayer duty. Some mayors down here seem to do that … and don’t come unstuck until they tread on a banana skin. Bertrand’s end came when he expected a journalist not to report his view of Triabunna as a repository of residential ‘bogans’.

It presented the perfect political opportunity for political opportunists as Mike Kent, himself a flamboyant city-slicker prince who beguiled all with his humility of mixing with locals at the locals of Orford and Triabunna … and describing his new twin home-towns as Paradise.

With LeFrog in disgrace from his careless observations of the Triabunna demographic, Kent slipped into the top job … amazingly coincidental with the tweaking of legislation that opened the mayoral contest to candidates without a councillor history. With preferences from fellow mayoral candidate Jennifer Crawford, Kent created history by becoming the first mayor of this municipality without any background as a councillor. And of course, and I don’t want to be unfair, the tragic loss of Mike Kent’s popular, gregarious and enterprising wife, Judy, to illness, would have leveraged his chances at the polls.

In the preamble to the election that got Kent the big hat, he was active in promoting select candidates as a powerful ‘team’ that always had the numbers to ‘get things done’ as a former local business and sea-venture entrepreneur, Keith Pybus, suggested of Mike Kent. Kent went to the polls vocal and loud on transparency, with the mantra that ‘everything goes on the table’ for public scrutiny. ( refer Tasmanian Times, HERE )

She too was questioning the hush-hush of council, particularly on plans to overhaul a run-down dysfunctional wharf area as the hub of Triabunna’s industry and commerce. It made simple sense that it accommodated larger vessels as her partner’s squid vessel and indeed the fishing industry to use as the preferred eastern seaboard port, with associated commercial benefits to the small town.

It provided the catalyst for Wisby to reflect on wide-ranging issues within the municipality that did not represent her expectations of transparency and good governance. And so, Debbie Wisby walked the plank and dropped into the maelstrom of local politics.

But being part of the Kent-for-mayor ticket also came with incumbencies that Debbie Wisby and some other councillors did not agree to … which amounted to the silence of the code within. This translated as keep your mouth shut, don’t talk to the media, we will do it all with glossy PR literature and there’s no place for loose cannon in this outfit.

This protracted spurious arrangement, where Wisby and some other fellow councillors with the feeling of being herded, bucked at the notion of having to concede to an inner sanctum. What seemed to be implied compliance fragmented this week with name-calling ferocity.

In April, councillors Wisby and Crawford in company with another female councillor, were present for the opening of ballot boxes in an opinion survey orchestrated by iconic recreational-fisher activist Don Paton, actually helping with the count, and re-checking data over a two-day period.

The poll showed an overwhelming opposition to fish-farming in Okehampton Bay in the State-wide poll.

The poll count, ignored by Mayor Kent, gave insight to the few councillors present of the wide-ranging consensus of dissatisfaction with lack of council transparency on industrialisation, such as huge projects as Tassal’s expansion into the East Coast and indeed the pollution of Okehampton Bay with 800,000 Atlantic salmon.

As former mayor Cadart’s bogan gaffe alienated him from the electorate, so too did Mayor Kent’s shackie description of opponents to Tassal, offend a large voting block at Orford.

Perhaps the Tassal venture, manifesting in media-saturated demonstrations in Hobart and at Okehampton Bay, has contributed to the implosion of the 2014 municipal pre-election block-vote, the fragmentation of consensus and the recent unprecedented walkout by Crs Wisby, Crawford and Richard Parker. The walkout has its roots in expectations of council transparency.

Ratepayers and indeed polemicists would agree with them. Matters as the protracted absence of Bertrand Cadart from council deliberations should not be hidden from the public by slipping into confidential-mode.

Just what happens next, with the announcement of the resignation of Bertrand Cadart may well have averted a continuum of conflict within council that have already resulting in a paradigm shift in the hitherto smooth relationship between this council and its State Parliamentary masters.

A third walkout would have heralded the arrival of the Minister for Local Government into the affairs of the Glamorgan Spring Bay Council … and all this started with the aforementioned flamboyant motor-cycling mayor Bertrand Cadart who now lives interstate … and like-minded councillors as Wisby have been demanding answers to obvious and expected questions of proprietary, given that he was still on the ratepayer-payroll.

Why was he still being paid? If ill, as is suggested, why did he not resign as councillor and allow a failed candidate to automatically step up? Was it because Cadart was part of a block vote favouring all council decisions. It would have upset a nice arrangement, should a replacement councillor not tow the Cadart line of compliance.

Such derision within council down this neck of the woods, and concomitant publicity, coincides with yet another paradigm shift in local government matters – the imminent question of merging councils. Do we really need to inherit shit-fights as this that might be embedded in neighbouring councils?

Now is the time for all good men and women councillors across the broad local government landscape to speak out. The best time to do that is now. The best way to do that is through the Fourth Estate, the media, regardless of what the inner sanctums think … or dictate about talking freely to the media.

After all this is a democracy.

Poison Pens In Eden’s Pond Part Two. Father and Son, Tasmanian icons of fishing and policing, make a stand against fish-farms proposed for Okehampton Bay on the State’s pristine East Coast.Who cares? Only those who love the region. Politicians don’t.

All about *Paul Tapp From humble beginnings in a Fingal Valley mining town, Paul Tapp’s ambition to become a journalist was denied him before being conscripted into national service and serving as an infantry rifleman in South Vietnam in 1967. His photographs and captions to The Examiner Newspaper during his service were intercepted by the Defence Force and stamped as official PR until Paul produced negatives of ownership. And thus his career began. He was the only journalist to receive the State’s major award for broadcast and print journalism, eventually pursuing a career in Government press secretariats in the NT and in Tasmania. In retirement he investigated the police killing of Joe Gilewicz in 1991, where his work was taken to Parliament by Peg Putt MHA, eventuating in a Commission of Inquiry. Latterly his probing into the disappearance of Lucille Butterworth was the catalyst for a coronial inquest into that matter. Paul continues to ‘keep watch’ and contribute material to the Tasmanian Times.