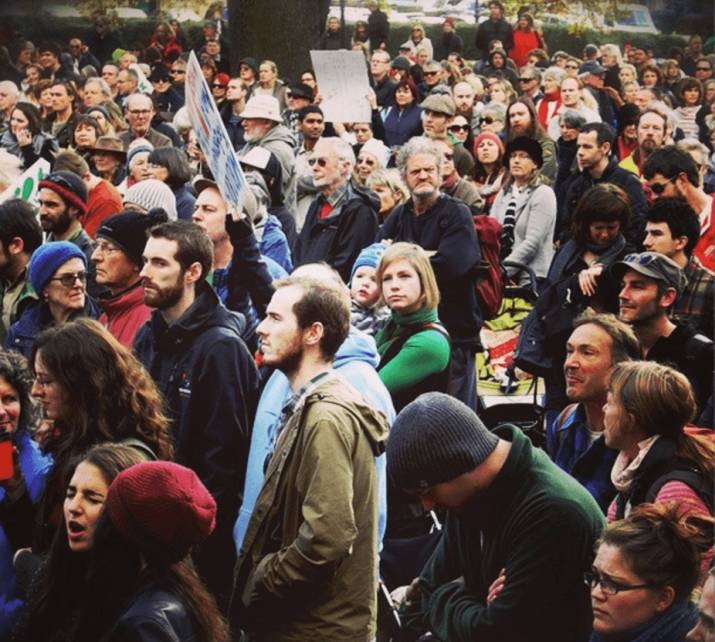 *Pic: Brendan Gogarty’s pic of a protest … ‘Criminals the lot of them: that is what people who stand against government plans ‘to rebuild Tasmania’s forestry industry’ could become under the new anti-protest law.’

*Pic: The moment of environmentalist Bob Brown’s arrest in 2016.

Criminalising dissent: anti-protest law is an ominous sign of the times

The Workplaces (Protection from Protesters) Bill – locally known as the “anti-protest” bill – was passed by Tasmanian parliament late on Tuesday night (This article is from November 2014). The law was introduced as part of the government’s intention to “re-build Tasmania’s forestry industry”. That is a source of controversy and division in Tasmanian society.

To achieve its aim, the government has committed itself to a wide legislative agenda. This includes: amending the uniform Defamation Act 2005 to allow large companies to sue protesters; defunding community and conservation organisations; and tearing up a “peace deal” between foresters and conservationists, which had been enacted into law before the 2014 election.

Recognising the potential return to hostilities, the government said it would “not try and appease” protesters, but would rather “toughen the law to deter them”.

The anti-protest law is its chosen mechanism of deterrence. While such hard-line policies on political opposition are not new, the severity and breadth of the law to enforce such a policy arguably is.

The shift from hard-line policy to hard-line law is worrisome in a constitutional democracy. The spread of state anti-bikie laws in Australia illustrates why this law is not just of concern for Tasmanians.

The business of silencing protests

The new law covers all acts on, or acts inhibiting access to, a business premises (all public and private land, including forestry and mining lands) which are:

… in furtherance of, or for the purposes of promoting awareness of or support for an opinion, or belief, in respect of a political, environmental, social, cultural or economic issue.
Any such protest is subject to significant penalties if they interrupt “business activity”. While originally such sanctions were mandatory, the government agreed in the upper house to exchange these for discretionary penalties.

However, the government agreed to this only on condition that the subsequent maximum penalties would be significantly increased. This was to “send a strong message” to protesters and the courts charged with punishing them. As a consequence, protesters who repeatedly interrupt business face fines of up to A$10,000 and four years in jail.

… disproportionate and unnecessary [creating a] chilling effect of silencing dissenters … [who are] key to raising awareness about human rights, political, [and] social concerns … holding not just governments, but also corporations accountable.
A wide range of legal professionals have voiced similar criticisms. While the removal of mandatory penalties alleviated some concerns, the larger concern about a law designed solely to punish people for protesting against controversial business activities – especially publicly supported and funded ones – remains.

Right to protest? What right?

Australia is the only western democracy to lack an entrenched bill or charter of rights. Nor do we enjoy a strict separation of powers doctrine to keep governmental power in check. Our civil rights are entirely the product of our parliamentary process – and entirely vulnerable to it.

The only thing that ensures this process operates in the public interest is the ability of electors to openly exchange criticism of governmental action, free of pressure or retribution, so that government remains representative and responsible. As High Court justice Brennan said:

It would be a parody of democracy to confer on the people a power to choose their Parliament but to deny the freedom of public discussion from which the people derive their political judgements.
Tolerance of divergent ideas and expressions is important in any democracy, but in Australia, where we have few other protections, it is vital. That principle extends beyond mere words, but to acts and places too.

If the government controls where or how people say things it can greatly inoculate the strength of a political message, if not extinguish its impact altogether. In a society awash with information, individuals must adopt varying – perhaps sensational – approaches and measures to publicise dissent and disagreement with mainstream policies. That is not least because their message may not accord with the views of those who control dominant public forums.

That is not to say all speech should be unfettered; the government has a duty to regulate actions that undermine the public interest. It must also protect people’s business from criminal activities. However, such legal protections must be tailored and balanced against the constitutional obligation to ensure freedom of political expression.

Law turns protest into a crime

Unfortunately, the anti-protest law does not seek to engage in such a balancing process at all. Despite being pitched as “protecting workers’ rights”, the Tasmanian law makes no mention of industrial, political or other civil rights – it solely focuses on sanctioning protest. Nor does it provide legislative direction on how such rights and duties should be balanced.

In fact, workers’ rights and business interests are already protected by a wide range of civil and criminal laws. The anti-protest law seeks to do something more, specifically to scare people off protesting – that is, “expressing objection to or dissent” about matters of public interest – by turning protest into a crime. It does so without providing any commensurate recognition of the constitutional importance of political protest, expression or dissent.

Previous protest and assembly laws have tended to be written cautiously, reinforcing rights as much as taking them away – for example, the Peaceful Assembly Act 1992 (Qld). The Tasmanian law is, simply put, brutal. It does not appear to once engage with the responsibility of government to foster all forms of political expression, even the types it doesn’t like; especially those types.

The anti-protest law indicates a move away from self-imposed governmental restraint towards a “get things done at all costs” attitude, even if the costs are disproportionate, unjustified and antithetical to Australia’s constitutional system. This law raises serious questions about the current attitudes and commitment to representative and responsible government in this country.