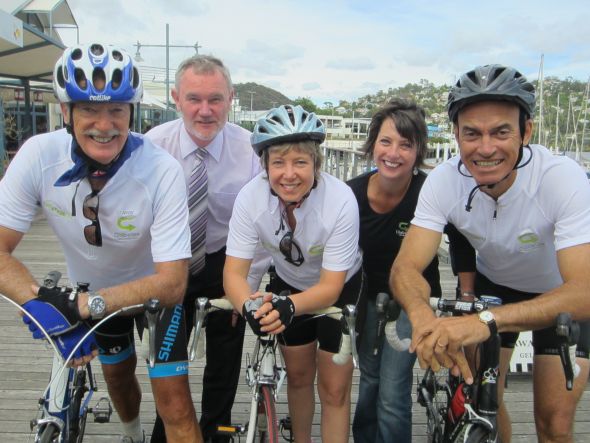 The annual fundraiser commenced its partnership with former Senator Guy Barnett in 2006 and in
that time has raised over $290,000 to support the thousands of Tasmanians diagnosed with
diabetes.

Mr Barnett, who has type 1 diabetes and now serves as Ambassador for both Diabetes Australia and
Diabetes Tasmania, was also there to officially launch this year’s event.

Diabetes Tasmania CEO Caroline Wells said PolliePedal was the flagship fundraising event for the
health charity that connected participants with local Tasmanian communities to raise awareness of
the risks associated with diabetes.

“PolliePedal has attracted many local, state and federal politicians over the years, and we are thrilled
to welcome back a great line-up in 2012 to raise funds and awareness for our cause,” Ms Wells said.
“All riders should be congratulated for stepping up and undertaking this physical challenge.”

Mr Barnett said he had been training a few days a week in preparation for the 254km ride and was
looking forward to putting his fitness to the test.

“Polliepedal is a personal challenge that will certainly test my cycling skills and I look forward to
participating with a great group of people for such a worthwhile cause,” he said.

“I strongly encourage all Tasmanians to live healthy, active lifestyles to help lower their risk of
diabetes.”

Diabetes is Australia’s fastest growing chronic disease and around 75% of people diagnosed with
diabetes die from cardiovascular disease, including heart attack and stroke.
Diabetes Tasmania