Tasmanian roads –
latest alerts & reports
Want to have a say?
Send us a letter for publication
new writers & contributors welcome,
please contact us with your submission
Tasmanian weather
forecasts and warnings
Donate to Tasmanian Times –
BSB: 807009 Acc: 60178142
no new content for a few days,
site is being migrated 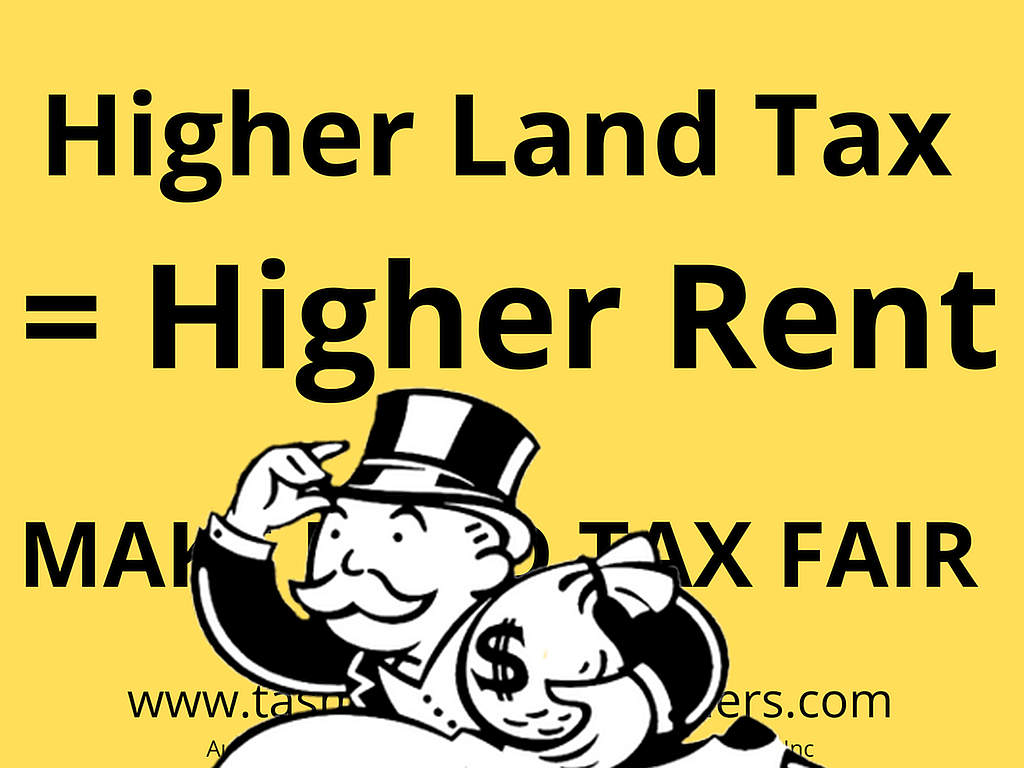 If you have been in Hobart lately, you will have seen the Tasmanian Residential Rental Property Owners Association’s (TRRPOA) sign Higher tax = Higher rent. This sign is part of the TRRPOA’s campaign to push for lower land taxes on investment properties in Tasmania.

The TRRPOA is implying either a direct correlation between land tax and rent prices or that the current land tax will cause investors to leave the market, creating a supply shortage in rentals.

To put it bluntly, either proposition these signs set forth is wrong. A higher tax might be bad for investor profits, but it doesn’t cause an increase in rent prices.

How rental prices are determined

When rental vacancies are high, it is because there is either too little demand or too much supply. In this market scenario, landlords will compete to fill their vacancies by lowering their rent to attract tenants.

On the other hand, low rental vacancies are caused by too much demand or too little/constricted supply, though often a combination of the two. In this market scenario, landlords can charge more for rent because tenants are competing to find a place to live.

According to SQM research, rental vacancies in Hobart as of August 2021 are estimated to be 0.5 per cent; this is incredibly low. At the same time, demand for rentals in Hobart has risen for several reasons. Therefore, landlords can raise the price of rent because the current market scenario allows it.

An investor’s profit margin or income is typically equal to rent charged minus insurance, tax and interest/mortgage repayments. Because rent prices are determined by the rental market rather than landlord expenses, landlords cannot pass land tax or other costs to tenants.

Rent increases cannot be attributed to increases in investors expenses. Rent prices are raised only when the market is tight enough to allow it. With this understanding, the TRRPOA signs and campaign are baseless.

By their logic, does the TRRPOA believe that Lower Land Tax = Lower Rent? It’s doubtful that sign will make an appearance any time soon.

What happens if investors throw in the towel?

Some would argue that supply and demand do intersect with investors’ profits. If a landlord’s profits are too low, they may abandon their investment, causing further supply shortages in the rental market and pushing prices higher. However, two forces are acting here; the rental market and the housing market.

The more people own their homes, the fewer rentals are needed. Should investors choose to abandon their investments, the properties won’t just disappear.

Without investors, houses become available on the market as homes. When properties become available as homes, supply increases in the housing market; in this situation, house prices will either fall or stagnate, depending on demand levels.

As a result of lower house prices, people previously forced to rent may afford their own homes, removing them from the rentals market. In turn, there should be a fall in demand equal to or greater than the fall in supply in the rental market. Lower demand means more rental vacancies, meaning lower rental prices.

Even if investors are making a loss on their rental properties, a loophole in Australia’s tax system means that any losses are paid back in the form of tax refunds.

The organisers at the TRRPOA are sure to be aware of negative gearing. Negative gearing is a situation where the expenses of an asset are greater than the income it generates. When an investment property is negatively geared, any losses can be claimed against the investor’s income tax, meaning the federal government pays the value of the losses in the form of a tax break. All while the value of an investment property likely increases.

With this in mind, there is no reason for investors to leave the market in the first place.

Should all this fail to be convincing, rental expenses, including land tax, are tax-deductible on personal income. Meaning that depending on the tax bracket investors are in, between 30% and 47% of land tax paid is refunded by the federal government. Meaning again, Tasmania’s land tax has no conceivable bearing on rental prices.

An excellent question to ask is: if the high land tax is supposedly forcing rents up, then why aren’t low interest rates forcing rents down?

Why is Tasmanian’s land tax high?

The bottom of the TRRPOA”s signs reads, Make Tasmanian land tax fair. The argument here is that land tax in Tasmania is unfairly high compared to the rest of the country.

Tasmania’s land tax begins at a lower value threshold than any other state. However, this is a relic of the fact that Tasmania has been one of Australia’s poorest states until recently. Because of the historically lower average property price in Tasmania, property investors begin paying land tax at a value of $50,000.

Legislation has not been able to keep up with the eye-watering speed at which Tasmania’s land has gained value. However, the recent state budget made moves to change this.

The TRRPOA said, “Fresh valuations are rolling out across the state and, as we’ve already seen, land tax increases between up to a whopping 70 per cent are common.” This statement is not a lie, but it’s not the whole truth.

If this sign doesn’t make any sense, then why is it up? Either the TRRPOA doesn’t understand how rental prices are determined or are intentionally misleading the public.

The claims made by the TRRPOA are unfounded by the reality of the situation, but that might be the point. A propaganda technique coined as ‘the big lie’ works on the principle of telling a lie big enough that it can be believed

This kind of rhetoric is a time-tested method of persuading public and political opinion of tax legislation through fear. During Tasmanian’s worst ever housing crisis, the TRRPOA signs can be seen as little more than a thinly veiled threat to tenants and politicians.

Real estate investment provides a place for people who cannot afford their own house. However, while doing so, the rental market and housing markets are inflated. Real estate investors increase demand by pricing people out of the housing market and limit supply by purchasing limited property. This combination drives the value of their assets higher while avoiding the lion’s share of federal and state taxes.

The TRRPOA campaign may be utilising fear to shape public opinion to the benefit of property investors, publicly pushing the falsehood that higher tax necessitates higher rents scares renters. It would benefit the members of the TRRPOA for tenants who cannot afford increased rent to believe it is in their best interest to side with landlords seeking tax cuts. This kind of shift would in turn place pressure on the government to implement tax cuts.

With rents rising, properties gaining value, and interest rates at a record low, any landlord should be doing pretty well from themselves. Next time you’re in Hobart, it is worth remembering that higher taxes might impact investors’ profits, but by no means does Higher TAX=Higher RENT.

Heidi Heck is a business journalist and the new Economics Editor of Tasmanian Times.