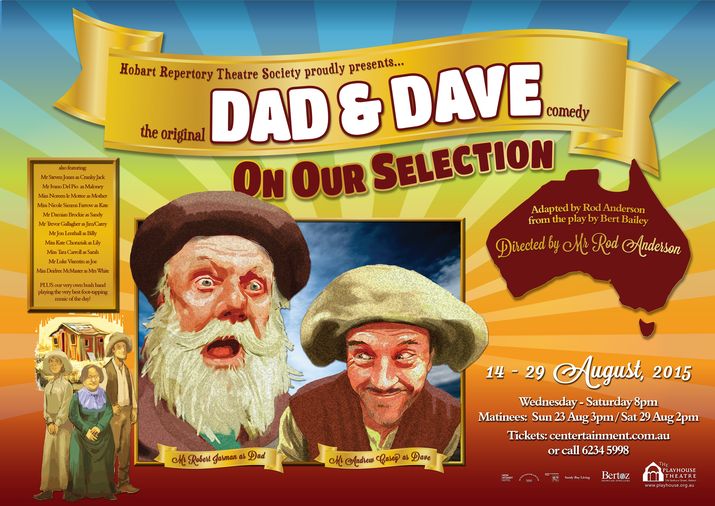 Do you want a ‘bloody good laugh’ and support a community cause? Then come to Flourish’s Preview evening ‘On Our Selection’ Fundraiser on Thursday 13 October 2015 and join in the fun.

‘On Our Selection’ has become part of Australian folklore and is a slapstick melodrama comedy based on the Dad and Dave stories by Steel Rudd. It was turned into a play as early as 1912 and was made into a film in 1932, which was one of the most popular Australian films of all time.

There have been three major movies about Dad and Dave, a radio serial that ran for decades and several television adaptions. The play was so popular from 1912 to the 1950s that it was being continuously performed somewhere in Australia.

And now, you now have the opportunity of experiencing this for yourself at the combined Flourish Mental Health Action In Our Hands and Hobart Repertory Society fundraising event. Doors open at 7.30pm for an 8pm start.

The Executive Officer of Flourish, Miranda Ashby encourages everyone to come, explaining “In Winter, we are all in need of a fun night out and a good laugh. So come along, have a laugh and do some good.”

The Flourish fundraising preview evening ‘On Our Selection’ in association with the Hobart Repertory Theatre Society will be held on Thursday 13 August 2015 from 7.30pm to 10.30pm at the Playhouse Theatre, 106 Bathurst Street, Hobart.

Flourish Mental Health Action In Our Hands Inc. is an independent organisation which aims to further the interests and needs of mental health consumers in Tasmania. Flourish seeks to provide a strong voice for the views of mental health consumers in Tasmania, develop people’s capacity to participate meaningfully in society, and experience fair access to quality services which reflect their needs.